Hugh Ramsey holds up a "tear ball grenade," as it's described on the manufacturer's website, that he found in the gutter. Ansel Herz

The Seattle Police Department's "blast balls" aren't just dangerous when they're exploding in the middle of crowds and next to reporters. A bartender found one of the devices, unexploded, with the pin still in it, in a gutter on Capitol Hill.

An SPD training video says it's like "having thunder and lightning in the palm of your hand."

The blast balls are sometimes confused with flashbangs because they emit a bang and a flash of light. Flashbangs do largely the same thing, but they are not ball-shaped.

On the website of blast ball manufacturer Combined Tactical Systems, blast balls are called "tear ball grenades." The company's 2014 catalogue describes blast balls of various kinds—tear ball grenades and sting ball grenades—as a level-5-grade weapon on the spectrum of "less lethal" force, designed to "suppress and degrade." That's one level below lethal force, which is level 6.

The company's tear gas canisters have been used against protesters in Ferguson and Egypt.

Hugh Ramsey, an eagle-eyed bartender, saw the blast ball sitting near Denny and Melrose as police herded the May Day crowd away from downtown last Friday evening. He had come out of his apartment to see what was going on after hearing loud booms. Here's what he saw, captured through the lens of his Nikon camera. Does this look like a riot to you?

The scene on May Day as police used blast balls on a crowd of protesters. Hugh Ramsey

One can see smoke or gas from a blast ball rising on the left. As the crowd of protesters and police moved past, Ramsey noticed the grenade sitting in a gutter nearby.

The department insists that what occurred on May Day was a "full-scale riot."

"I know it’s semantics," Ramsey said when I asked him if what he saw was a riot, "but that’s a very strong word for what was going on. A 'full-scale riot' would be something like what we saw in Baltimore—actual rioting—as opposed to a few individuals who are choosing to destroy property."

This May Day timeline released by SPD on Thursday shows a few protesters tossing traffic cones at police or breaking windows, but little else.

At Wednesday's city council briefing, where Council Members Bruce Harrell and Nick Licata sharply questioned police tactics, one protester said police were "throwing out flash grenades like they were tiddlywinks."

He's not wrong. I asked SPD how many blast balls they used six days ago and have not received a response. 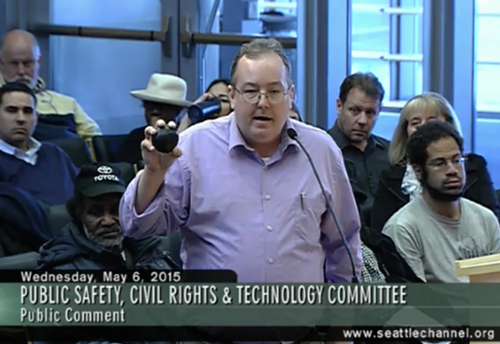 Jerry Savage, a 46-year-old researcher, held up an exploded blast ball at City Hall on Wednesday and said, "This was a flashbang that was thrown at me. It struck me in the leg. I have a rip in my pants and I have a large bruise on my ankle that I sustained from this weapon." He said that in his video footage from the day, "You can see an explosion going off right next to me." Seattle Channel 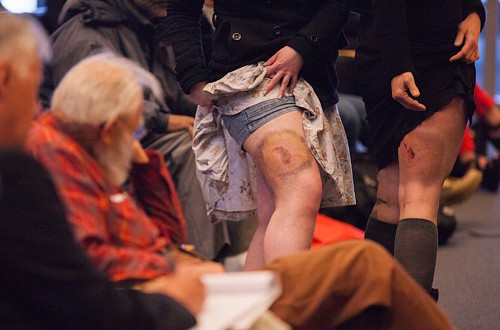 Two others, including one who identified herself as a street medic, showed off huge welts they said were caused by the blast balls. Alex Garland 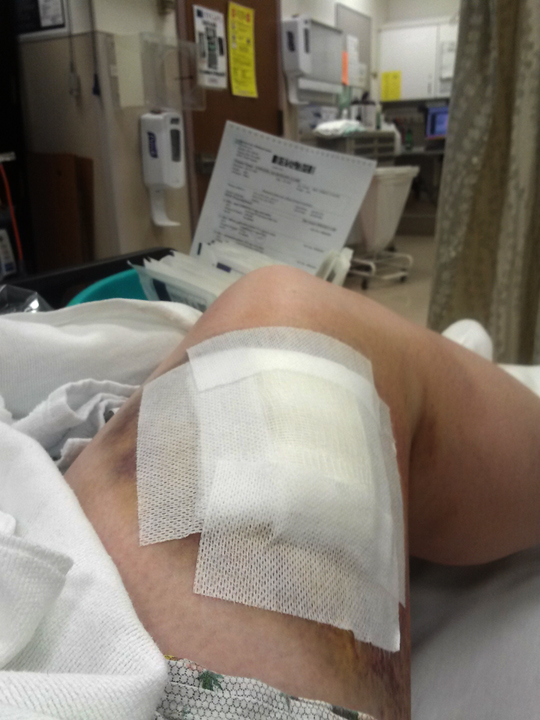 The bruised woman on the left in the previous photo is Jaci Conger. In addition to bruising, she suffered a second degree burn, she said. She sent me this photo of her leg being treated at Harborview. "I didn’t do shit on May Day except walk down the street," she said on Facebook. "I was hit by one of the first flashbangs they threw and have had to seek medical attention multiple times since." Harborview has confirmed they treated her after May Day, and Conger sent me photos of medical paperwork showing she was prescribed painkillers for the burn. A doctor at the hospital's burn clinic said she "can return to work/school after a follow-up" appointment on May 13. Jaci Conger

On May Day, I took this photo of a man who said a blast ball caused this welt. Ansel Herz

"If one of those things hits someone in the eye," said Council Member Bruce Harrell at the briefing where he pointedly questioned police tactics, "I think they're going to be permanently blinded."

The excessive and indiscriminate use of whatever you want to call them—blast balls, tear grenades, or flashbangs—raises questions about whether the Seattle Police Department has gotten any better at policing large demonstrations. Chief Kathleen O'Toole has thus far backed her officers' actions on May Day to the hilt.

Some of you may remember that in November 2011, Seattle police drew national and international attention because they pepper-sprayed Dorli Rainey, an 84-year-old woman, at an Occupy demonstration in downtown Seattle, directly in the face.

At the time, the department defended its indiscriminate use of pepper spray by alleging that a 17-year-old swung a stick at an officer, even though my own handheld video, as the New York Times noted at the time, did "not support" the police account. (Then-mayor Mike McGinn apologized the next day.)

Under questioning from Harrell on Wednesday about May Day 2015, the police defended their decision to tackle a single demonstrator from behind with a bicycle in order to arrest him, leading to what Harrell called a "melee" (as you can see in this video). SPD said they needed to arrest him because he assaulted police by tossing a traffic cone at them. The traffic cone does not appear to injure any of the officers.

It was from that point forward that police used blast balls.

O'Toole and the SPD, egged on, of course, by local TV stations and the Seattle Police Officers' Guild, have tried to turn Harrell's comments—he said the decision to make the arrest that way "seems idiotic"—into some kind of scandal.

On Q13 Fox today, Harrell reminded them that he is known for his frankness (this is totally true, as any city council observer can attest), and insisted that he will play an oversight role: "Why is that the right way to make an arrest? They should be very prepared to answer these questions... The responses [on Wednesday] were inadequate."

The police chief's indignant, "shocked and disappointed" response to Harrell's common-sense questions is not a good sign.

SPD spokesperson Sean Whitcomb said if you find an unexploded blast ball you should call 911 to safely dispose of it.

Slog AM: State Patrol Loses 6% of Staff to Anti-Vaxxers, Congress Accuses Amazon Execs of Lying, Spokane Gets Weather Report with a Side of Ass