This press conference was as glamorous as it looks. Michael Scott, a healthcare worker at Swedish hospital, said what many others are saying: he can't afford to live near where he works. Ansel Herz

Midway through the summer, Mayor Ed Murray lost his spine and caved to NIMBY horde necromancer/Seattle Times columnist Danny Westneat. Murray has shown himself to be a mayor who'll routinely ignore pressure from Seattle's social justice left, but Westneat, using a combination of Internet tubes and words printed on dead trees, skillfully stoked the latent rage of Seattle's single-family homeowners against the specter of taller, denser buildings in their neighborhoods. Then, on July 29, Westneat declared "dead" key recommendations from the mayor's own housing affordability committee (HALA for short) that could have led to increased density in this city's single family zones. By that afternoon, Murray rescinded his support for those recommendations. This triumph of crusading journalism against the great evil of dense neighborhoods should not been forgotten.

Today, with a press conference at Capitol Court apartments on Capitol Hill, the mayor recovered what's left of his spine and, along with City Council Member Mike O'Brien, moved forward with the biggest remaining chunk of the HALA recommendations: the "grand bargain" between low-income housing activists and developers to generate thousands of new units of affordable housing. Later this month, the two officials—who don't always see eye-to-eye—will jointly introduce legislation based on the compromise deal to the city council.

To review: The remaining "grand bargain" deal involves two components: mandatory inclusionary housing (zzzzz, but even so, more on that below!) and commercial linkage fees (see our sideboob shocker/explainer). Together, the city says, those measures will create 6,000 units of housing affordable to an individual making $38,000 per year—units with monthly rents generally below one thousand bucks. Developers on the HALA committee, including big players like Vulcan, agreed not to sue to block either policy. 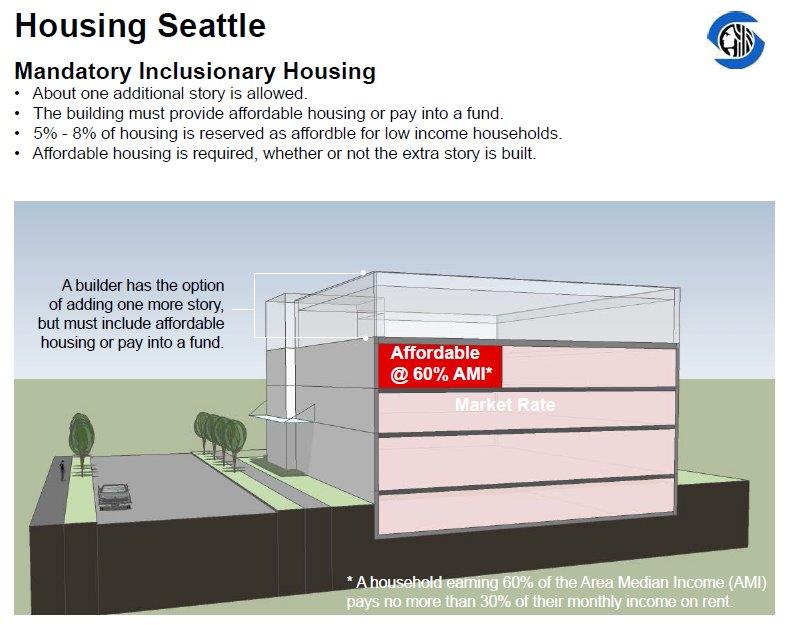 This graphic does a decent job of explaining how mandatory inclusionary housing—also known as mandatory inclusionary zoning—works. In short, developers get to build an additional story of units, and in exchange, they commit to restrict rents in 5-8 percent of all of the building's units to keep them affordable to middle-income folks. The remainder are market rate. Mayor's Office

"With this legislation," Murray said, "Seattle— for the first time ever—will require that all new development in the city will pay for affordable housing. This is a bold, progressive proposal where growth itself will support affordable and environmentally sustainable neighborhoods."

O'Brien said these changes will be launched this month with a resolution that will put the council on record as supporting them, followed by an actual municipal ordinance implementing the commercial linkage fee (which, super confusingly, the mayor is attempting to rebrand as the "Affordable Housing Impact Mitigation Program"—AHIMP!).

And, a heads up for all the urbanist fanatics and NIMBY hordes alike: the council plans to hold two public hearings this month, on September 9 and September 30, at which you can shout at them about why they're not going far enough/going way too far. 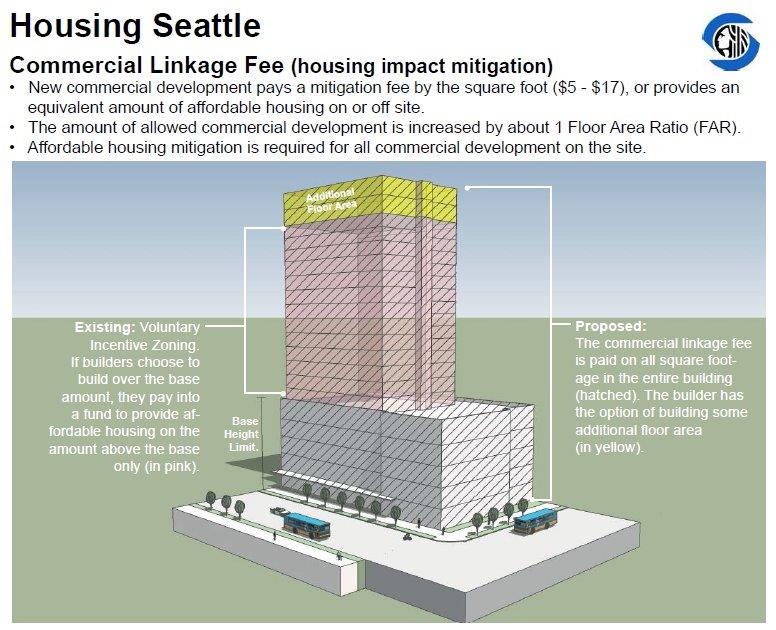 Linkage fees—which the mayor now wants to call AHIMPs!—levy a $5 to $17 fee per square foot of new commercial development. O'Brien had previously planned to push for linkage fees in residential and commercial zones citywide. Backing off of residential was part of the grand bargain with developers. Mayor's Office

Are 6,000 new units at this rental rate enough to turn around Seattle's housing affordability crisis?

"This is one piece of it to really harness private development," said Bill Rumpf, president of the nonprofit housing developer Mercy Housing and a HALA committee member. "This piece alone definitely isn't enough." He said it's up to the city to implement the committee's remaining recommendations, including doubling the Seattle Housing Levy and building affordable housing on public land, in order to meet demand and a larger goal, set by Murray at the outset of the HALA process, of creating 20,000 affordable units over the next ten years.