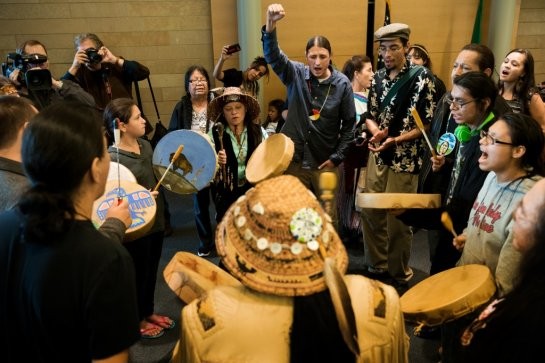 Well, that was a tense phone call with city council member and District 2 candidate Bruce Harrell.

At 10:50 this morning, Harrell's office notified his council colleagues that he would be introducing a proclamation celebrating Italian-American heritage—and specifically Christopher Columbus—on Monday, which also happens to be Indigenous Peoples' Day. When we called to ask him about it, Harrell said the proclamation's language about Christopher Columbus would be removed.

The first draft of the proclamation stated:

WHEREAS, Nearly half a millennium ago, when early Italians journeyed to this hemisphere, they helped to begin exchanges between the Old World and the New. Italian navigators Amerigo Vespucci, Giovanni da Verrazano, and Christopher Columbus, helped shape our modern world by doing what no others had accomplished;

This section is extremely problematic for a lot of reasons, the chief reason being that "begin exchanges" conveniently leaves out the fact that Columbus enslaved, brutalized, and murdered indigenous people on this continent. Recognition of Columbus's true legacy has led Seattle and a number of other cities to replace the celebration of Christopher Columbus with Indigenous Peoples' Day instead.

Last year, when Lakota activist and educator Matt Remle led the effort to launch Indigenous Peoples' Day, an angry group of Columbus Day supporters crowded him after a council hearing and compared Sitting Bull to Hitler.

"I have zero issues with an Italian Heritage Month, but this move is deeply troubling," Remle said in an e-mailed statement, adding that he supports the removal of Columbus's name. (Later, after The Stranger spoke to Harrell, Harrell's office called Remle and assured him the language about Columbus would be taken out.)

When we talked to Harrell, he said that his office had gotten a fair amount of feedback about the proclamation and that he believed the language about Columbus would be taken out. When asked how the idea came about in the first place, he said: "We've had Italian Americans approach us a month or two ago to have some kind of—they're having different festivities and they wanted some kind of recognition to present at some of their festivities." Harrell added that he's working with Council Member Nick Licata's office to figure out what would be appropriate.

But couldn't Harrell recognize how the first version of the proclamation could be seen as a pretty outrageous attempt to erase history? Why include Columbus at all? And why—of all days—would you introduce this on Indigenous Peoples' Day?

"I was the drafter of Indigenous Peoples' Day and I do know how offensive these terms could be, and we've listened to people and these changes have been made," Harrell said. Harrell, who was actually just a later cosponsor—not the drafter, we're told by someone close to the drafting—of the Indigenous Peoples' Day resolution, added that he thinks it's a good idea when organizations (Italian Americans, East Africans) want to celebrate their heritage, and "the city should get behind that."

Harrell did not like my next question at all. "Well, what if white people wanted to celebrate white heritage on Martin Luther King, Jr. Day?" I asked him.

But didn't he see the analogy?

"I don't see any value in responding to that idiotic question," Harrell said.

Harrell's proclamation will be made available for signatures on the same day that city council members vote on a resolution to recognize the traumatic legacy of American Indian boarding schools.