Here Is Why I Go to BEA 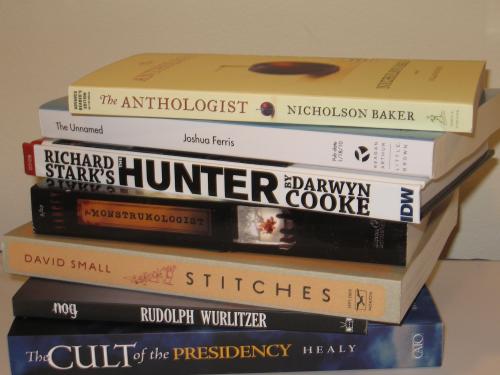 So far at BEA, I've picked up Nicholson Baker's new novel, The Anthologist (due out in September), Joshua Ferris's new novel The Unnamed (due out on January 18th),Darwyn Cooke's adaptation of Richard Stark's first Parker novel, The Hunter (out next month) a novel about grave robbers called The Monstrumologist (out in September), a graphic memoir about an awful childhood called Stitches (out this fall), a reissue of the great Rudolph Wurlitzer's early novel Nog (out in one or two months, with a cover blurb that reads "The Novel of Bullshit is dead." -THOMAS PYNCHON) and a book called The Cult of the Presidency by libertarian-ish press Cato. I can't wait to start reading.

I did not pick up the new Dean Koontz memoir due out this fall, even though there were billions of copies available. There are a lot of books with roses on the cover available, too. I didn't pick any of those up. Not even the one called The Rose. I didn't wait in the mile-long line for Neil Gaiman's autograph. I am upset that there is no McSweeney's or Small Beer Press booth this year. The small presses are getting sized out of BEA. I ran into Stephen Elliott, author and founder of the blog The Rumpus, and he declared that literature had been forced out of Book Expo America.

I am shocked that I haven't seen Sherman Alexie yet, but it is only a matter of time. He was quoted on Twitter as saying he wanted to punch an old lady for using a Kindle, though. Which is the next best thing to seeing Sherman Alexie. And I heard a rumor (a very solid rumor, but a rumor nontheless) that someone is serious about bringing a book festival—a real book festival, not Bookfest—to Seattle, and they're talking to the Mitch Kaplan, founder of the Miami Book Festival and also to the people behind the Brooklyn Book Festival about how to do it right. This is very exciting.

Comments 6
Tags: Books Blogs At Large
The Stranger depends on your continuing support to provide articles like this one. In return, we pledge our ongoing commitment to truthful, progressive journalism and serving our community. So if you’re able, please consider a small recurring contribution. Thank you—you are appreciated!
CONTRIBUTE NOW