What Happens When You Get Shot and Survive

"Few people have an actual concept of how much damage a single bullet can do." 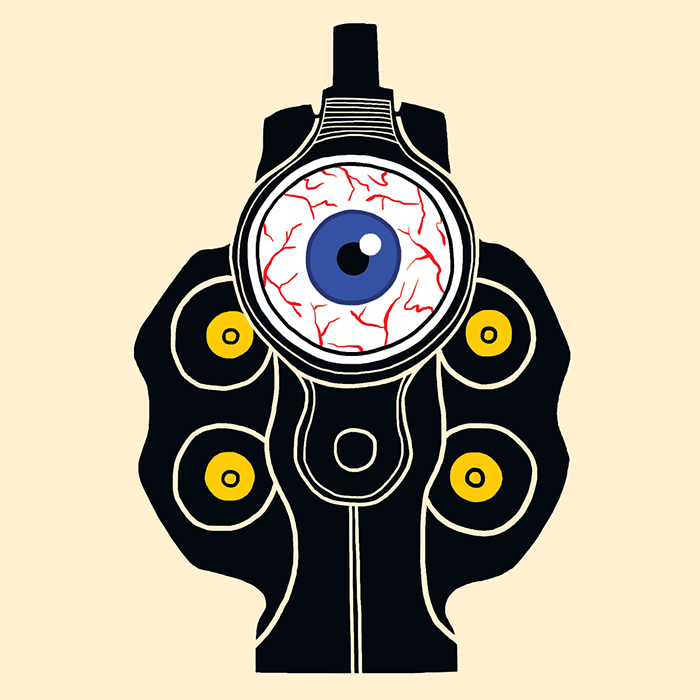 The night Greg got shot, he was working the door at the Twilight Exit, a neighborhood bar and restaurant in the Central District. It was January 27, 2013, which was a Sunday karaoke night, and Greg was subbing for the regularly scheduled bouncer.

Greg was standing in the alleyway next to the bar's main entrance when a man named James approached, pulled out a gun, and pointed it at Greg. James was angry with his girlfriend. She was seated in the lounge inside the building. "He kept screaming: 'That bitch. I'm gonna kill that bitch. Get the fuck out of the way,'" said Greg. He and James had a brief verbal exchange. Suddenly, James lowered his gun, pointed it at Greg's leg, and pulled the trigger.

"For a second, I thought, 'Oh thank God, he didn't hit me.' Then I tried to take a step and my leg wouldn't move. I looked down, and there was a hole in my jeans where the bullet went in," said Greg. The pain kicked in fast. "It's like getting hit by a car, but in a very central location. Really hot and really crushing," he said. Blood poured from the wound. The bullet entered the crease of Greg's thigh, severing his femoral artery. Without proper medical attention, Greg would bleed to death in minutes. "I started to collapse against the door, and James grabbed my shirt and yanked me down. He kinda kicked me out of his way and stepped inside," said Greg.

Around the same time, a regular customer named Steve was on his way to the bar for a typical fun night of drinks and karaoke. Steve was starting a new job the next day as a prep cook, but his long-time dream was to become an EMT. Steve had just finished parking his scooter nearby when the first gunshot sounded, and after he sprinted to Greg's aid, Steve quickly recognized the nature of Greg's wound. He knew the only way he could stop the bleeding was to put his finger in the bullet hole and apply pressure until medics arrived.

"It felt like it was something normal for me to have done," Steve said.

Meanwhile in the building, chaos erupted when James entered, gun in hand. Some people fled, some took cover, some held perfectly still. James, searching for his girlfriend, passed the dining area into the lounge and then followed the bend of the horseshoe bar to a dead end. There on the floor, five people—all women— huddled together. James's girlfriend was there. I was there, too. James stood over us with a gun. Then James shot his girlfriend, and soon after, the police showed up and shot James, killing him. James's girlfriend survived. No one else was injured.

But this is about Greg. The ambulance arrived in time. "It seemed like forever. I could hear the sirens, but they seemed so far away," said Greg.

Later at the hospital, he learned the bullet threaded the needle through a circular opening in the pelvic bones called the obturator foramen, where it struck his femoral artery. "Few people have an actual concept of how much damage a single bullet can do," Greg said. "The artery snapped. It was like a rubber band that retracted. They had to fish it out of my leg and reattach it. The first surgery took five hours. They put my leg on ice because it was technically dead. Whenever your tissue has no blood in it, it begins rotting almost immediately. They used ice to keep my leg preserved, and they pumped it full of blood afterward to revive the flesh," he said.

The obstacles continued. "Because my leg had gone so long without blood, we were worried about clots. If you have one clot, it'll kill you. It will clog your artery or it will slide into your brain. That was a very real concern. So I had to have a second surgery two days after the first one. The doctors went into my calf, and they separated my muscles, pulling them apart—that was a huge trauma—and they literally vacuumed up any clotted blood that had formed," he said.

Greg faced a difficult recovery when he returned home. "I had to pack my wound with gauze. I'd dunk a wooden stick into the bullet hole—it was like a tunnel in my leg—and later I'd pull out the gauze and try to drain fluid from the wound. I did that twice a day," he said. His movement was limited. He remembered: "It would take me forever to get anywhere. It was maddening. After the wheelchair, I switched to a walker. I remember using it to go to the kitchen to get a soda, and feeling like it was this big victory."

"It took months before I was able to wear regular clothes again. Jeans were too constrictive. They'd bother my skin. I couldn't even wear sweatpants. The material just felt too heavy. I could only wear very loose track pants and very light fabrics like slacks."

Greg eventually regained his ability to walk, but injuries can linger. "There are a lot of reminders attached to my body," said Greg. The list is long: chronic pain and swelling; poor circulation; limited flexibility, mobility, and muscle development; giant scars; a lifetime of nerve damage.

"That's what's happening now. Who knows what it's going to be like when I get older," he said. Prior to the night of the shooting, Greg knew James vaguely, as a customer. "I'd poured this guy beer before. I'd seen him in the bar, and I'd talked to him a little bit. Never about anything significant, but we'd never had a negative interaction, either," said Greg. "I know that violence will keep happening. People will keep getting shot. Things can go really bad in a second. I can't make this into a neat story with a happy ending."

I charted the aftermath of the shooting—including my own story—in a column for McSweeney's. On July 23, I will be discussing the case at the University Book Store, and another witness will be joining me for an onstage conversation.

Comments 5
Tags: Books
The Stranger depends on your continuing support to provide articles like this one. In return, we pledge our ongoing commitment to truthful, progressive journalism and serving our community. So if you’re able, please consider a small recurring contribution. Thank you—you are appreciated!
CONTRIBUTE NOW