Gillian Gaar's book is a treat for the label's hardcore fans. 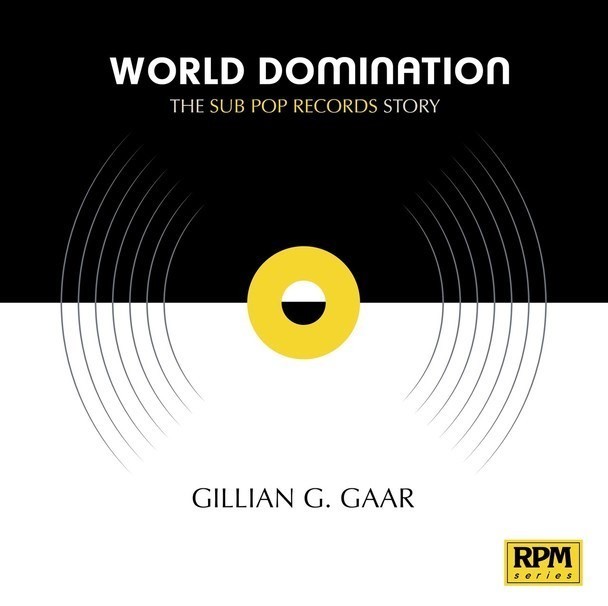 Part of a new book series on record labels, each title is the size of a 45 single.

Celebrating its 30th anniversary this year, Sub Pop is an unusual record label in many ways. First, it's rare for an indie label—even one with major-label shareholders—to last that long without losing quality control. Second, the Seattle corporation operates with a self-deprecating sense of humor (the iconic LOSER T-shirt, the slogan "We're not the best, but we're pretty good," etc.).

Third, it rebounded from the brink of financial ruin and stabilized into profitability within a floundering industry trying to adjust to streaming's hegemony. Fourth, it early on recognized the importance of branding and creating a sense of exclusivity.

Finally, Sub Pop transitioned from the most formidable incubator for one genre (grunge) into a haven for diverse acts while still honoring its legacy. The only labels that seem comparable in terms of durability and adaptability to the business's capricious ways are Mute and Warp.

World Domination: The Sub Pop Records Story is a straightforward, deeply researched account of this city's most famous and best-logo'd record company. The author is the respected Seattle journalist Gillian G. Gaar, former editor at the Rocket and author of She's a Rebel: The History of Women in Rock & Roll, plus biographies of Jimi Hendrix and Nirvana.

Gaar vividly portrays Sub Pop's unconventional beginnings. It arose out of Bruce Pavitt's zeal to discover adventurous, obscure new music, as manifested in his Subterranean Pop zine, which launched in 1980. He would curate cassette compilations to accompany his criticism, an activity that led to Pavitt appearing on KCMU to promote the Sub Pop 100 comp in an interview conducted by future business partner Jonathan Poneman. During the confab, the two discovered a mutual altruistic passion for championing overlooked music, and the rest is literally music-biz history.

For World Domination, Gaar takes a chronological, minutiae-heavy approach and lets her interview subjects do most of the analysis. She rarely inserts her own opinions into the narrative; therefore, the book reads like a long article in a newspaper that strives for "objectivity." And perhaps that's what the publisher, BMG Books, demanded. (World Domination is part of a new series focusing on record labels called RPM; each edition comes packaged in a seven-by-seven-inch format, to evoke the feel and look of a 45 single.) One can't help feeling, though, that the book could benefit from Gaar's viewpoints.

But this possible drawback is compensated for by the revealing quotes she coaxes from Sub Pop's founders, as well as keen observations from label CEO Megan Jasper, A&R honcho Tony Kiewel, and other employees. More input from Sub Pop artists would've been welcome, but again, this may not have been part of BMG's agenda.

In 2018, Sub Pop appears to be in better shape than most labels. Poneman and company have found an ideal balance between the accessible and the edgy, fetishizing physical product and being digital-savvy, homaging the past while building for the future. Sub Pop may not be planet-conquering (always a tongue-in-cheek boast), but it truly is better than "pretty good."