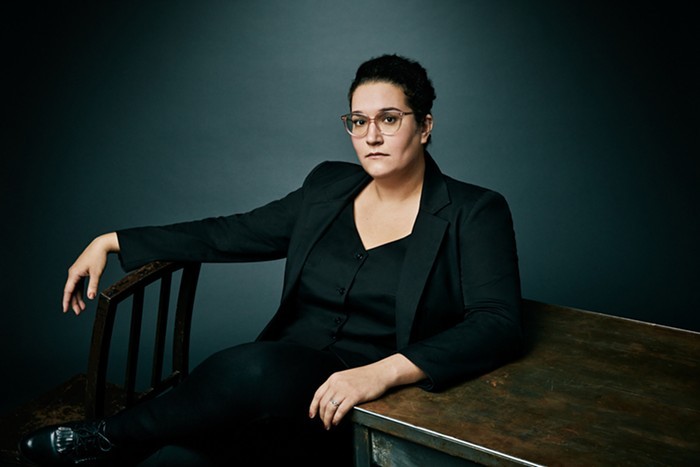 Carmen Maria Machado isn’t teaching this year. In the spring of 2019 she won a Guggenheim Fellowship, so she’s taking the year to work on a new project. That didn’t stop her from teaching me, as we discussed In the Dream House, her new memoir focused on the dynamics of a relationship she was in while pursuing a master’s degree from the Iowa Writers’ Workshop. The book is groundbreaking—we would expect nothing less from the author of the outstanding 2017 short-story collection Her Body and Other Parties—in its exploration of romance that gradually descends from cautious bliss into gaslighting and abusive control. Despite the book’s heavy material, Machado is full of laughter on the phone and patiently professorial as she schooled me on the Gothic genres.

Is it difficult to discuss In the Dream House without feeling on trial for the romantic relationship it describes?

Like the book’s structure being broken up into fragments? Or the house as a metaphorical site for the story?

When it comes to houses, and the idea of the home, houses don’t have inherent values. You can talk about a house however you want, and the home is big enough—it’s capacious enough—that it permits a lot of different kinds of metaphor.

In the Dream House flies in the face of a common perception that women—in this case, a petite blonde woman—are incapable of perpetrating abuse. Some people seem excited to talk about that in a way that makes me uncomfortable, and some people dismiss it as impossible.

People love to learn exactly the wrong lesson from things. They’re very excited to learn precisely the opposite of what they’re supposed to take away from something. It’s very stressful to me.

This book talks about a few relationships that are incredibly painful—not only with your ex-partner, but with the pastor in your church when you were young. Did you reach out to run things by these people? Was that possible?

No. The chapter about the pastor was actually drawn from an essay I wrote many years ago. This one is better because I’m a better writer now, but I did talk to other people who remembered that time.

I wasn’t interested in having a person who did something fucked up have a space to justify what they did. That is just not interesting to me. I’m not a journalist. I’m a memoirist. It’s not my responsibility to give people—my abuser, for example, or this pastor—space to create their own narrative.

Thank you for answering. I wasn’t sure if that question was a bridge too far.

No, it’s a fine question. There are people who might feel like the fact that I don’t talk to my abuser is ethically complicated. That was just a choice I had to make, as a writer, and I made it.

In the Dream House’s narrative trajectory and ending are so unusual that the story feels borderline mythical. Do you feel like your life has a mythical quality?

Don’t we all feel like our lives have mythical qualities? I’ve been very lucky in my life—in terms of privilege, but also I’ve always made really good friends. I’ve always found the people that I needed at the right time. But I don’t think that means anything. The word “mythical” suggests a higher organizing principle at work. I’m not religious. But it’s certainly a story. It’s an interesting bit of my life.

Is the interesting bit the story, or the idea that your life occasionally takes on, like, Southern Gothic style horror elements?

Speaking of Shirley Jackson, I’m always marveling that her collection The Lottery isn’t a core teaching text. You’ve talked about how difficult it was to get Her Body and Other Parties published—a book that I’ve described as so good “it lit me on fire.” Since this book is so fragmented, could it be seen as a short-story collection masquerading as a memoir?

Oh, interesting. I find something very interesting about the short-story collection and also the fragmented form in general. Lots of little things to tell one big thing. In the Dream House is nonfiction, but it does have that similar sensibility: fragmentation, telling one story through many stories or many modes.

As for why it’s so difficult to get short-story collections published, I actually have a theory: The reason they don’t sell well is that, in the US, we don’t teach them well. We read “The Lottery” the story, and we never talk about The Lottery the book as an entire thing.

One of my favorite fragments in In the Dream House is the Choose Your Own Adventure format. Can you talk about what inspired that?

Early on, my editor said, “You have to be playful. There has to be some levity in the book or it risks becoming entirely unreadable.” And I agreed. It would have been really hard—just ruthless and relentless—to try to tell it in a single mode.

I had an idea fairly early on. In a notebook, I wrote, “Gaslight the reader?” I wanted to create an effect where the reader would sense that the text was hostile in some way. I thought about introducing ideas as if I’d already talked about them, but people might just think that I was confused. So the goal was to create that effect while also letting the reader know I was creating that effect.

The Choose Your Own Adventure aspect is meant to make you feel like you have choices when, in fact, you have no choices. Most of the paths that you can choose are the incorrect path. And even the right path isn’t much of anything.

I’m glad. It’s supposed to be.

Comments 0
Tags: Books
The Stranger depends on your continuing support to provide articles like this one. In return, we pledge our ongoing commitment to truthful, progressive journalism and serving our community. So if you’re able, please consider a small recurring contribution. Thank you—you are appreciated!
CONTRIBUTE NOW