The hilarious hit podcast brings its live show to Seattle. 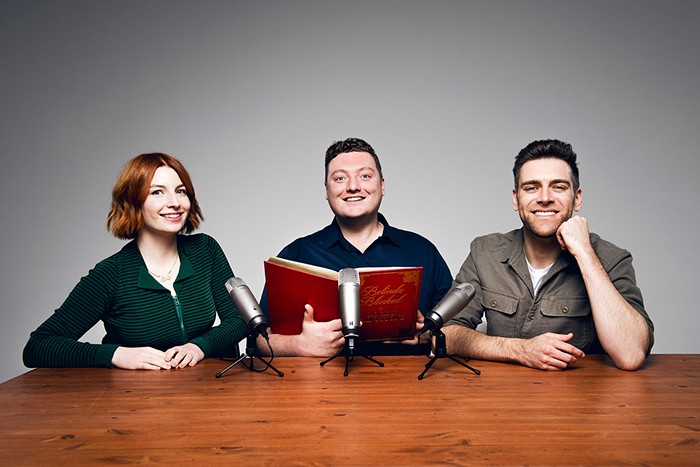 When British TV writer Jamie Morton's father handed him a book of erotica that he had written in a shed in his garden, the natural reaction on the part of the son would have been to burn the book, change his name, move across the world, and never speak to his father again.

And who could have blamed him? The book follows a young woman named Belinda as she fucks her way through a fictional company called Steeles Pots & Pans. Morton's dad gave himself the pen name "Rocky Flintstone." While Flintstone has actually fathered children, his pornography reads like someone who has never encountered a woman in real life, much less touched one.

Instead of disowning his father, Morton took his dad's pornography novel down to the pub, where he read it aloud to his friends James Cooper and Alice Levine. "We thought: This is hilarious and maybe other people would find it funny, too," Cooper told me in a phone interview. This idea grew into a podcast, which, much to their surprise, has become a major hit all over the world, with legions of fans who call themselves "Belinkers."

The premise of the podcast is simple: Morton reads a chapter from his dad's pornography, and the three crack jokes between sentences. It's both cringe inducing (Flintstone tends to use the word "moist" a lot) and very, very funny—in part because the friends so clearly enjoy each other's company.

The podcast now has more than 200 million downloads. They've had celebrities like Emma Thompson, Lin-Manuel Miranda, and Elijah Wood on the show, they've created an HBO special and a book, and they are now on their second world tour.

"You would never think when your dad hands you this terrible erotica that he's been writing in the garden shed that one day it will take you to Radio City Music Hall," Morton said.

While it may be natural to assume that Morton's father would be embarrassed by a global audience laughing at his creative genius, that's not the case. "The great thing about my dad is that he's got such a great sense of humor," Morton said. "And the fact that this has gotten so big, he finds it even more hilarious, like it's just the best practical joke ever. But he still thinks that he is a great writer. He still lives in that little bubble."

"What's going on in Rocky's head is always a dangerous thing to guess at," Levine added. "But he's said to us in the past, you'll understand when you're older, like, 'When you're a grown-up, you'll get it.' I don't know how old he thinks we are now. We're all in our 30s, but he seems to think it's going over our heads."

While Belinda's exploits may not be sexy to the cohosts, they said that some people literally get off on it. "We've had couples tell us that they'll listen to an episode and do whatever happens in the episode," Morton said. "Isn't that horrible?"

A typical passage may refer to "steaming vaginas," breasts like "pomegranates," and, in one particularly memorable scene, nipples "as large as the three-inch rivets which had held the hull of the fateful Titanic together." It may not be sexy, but it is hilarious—and their live show promises to be just as joyously unhinged.

Short Run's new book, Decade: 10 Years of Short Run Comix & Arts Festival, is a festival you can hold in your hands.