Has a friend who describes being an “ethnic” playwright as:

Had to turn down PhD offers at Stanford and Yale:

Because he needed a job to get a green card.

Begins writing a new play when:


For several years, playwright Yussef El Guindi was one of those Seattle artists whose talent seemed to be appreciated everywhere except here. While his plays were winning awards in Los Angeles, getting noticed by the New Yorker and the New York Times, and having productions in Chicago and London, the only Seattle audiences that knew his work were the regulars in the Capitol Hill basement known as Theater Schmeater.

That began to change in 2011 with the world premiere of El Guindi's play Pilgrims Musa and Sheri in the New World at ACT Theatre. Pilgrims, about a fraught romance between an Arab American and a white American, is El Guindi at his best. Pilgrims uses no stylistic tricks, no metatheatrical winking, just plain language from the mouths of unglamorous characters with Chekhov-sized longings. Though the text of the play calls for an actor to play a ghost, Musa and Sheri's affair is also haunted by the more complicated phantom of foreignness—not just between people from foreign cultures, but between people fundamentally alienated from each other.

Somehow, despite the seriousness of its themes, Pilgrims also manages to be sweetly goofy, even funny. One of its simplest and most charged jokes comes when Sheri visits Musa's apartment and notices his books. Earlier, Musa told her he'd learned English by reading mystery stories. She picks up his Koran, asking if it's a kind of mystery book, too. "Not really," Musa says uneasily. She presses, "It's a whodunit, isn't it?" Musa snaps, "We know who done it! God!"

El Guindi was born in Egypt, moved to England for boarding school during his formative years (where he dreamed of becoming an actor), started college in Paris, and then returned to Egypt to finish college in Cairo. "I left Egypt at such an early age and was brought up in a country that didn't really accept me," he says. "Then I went back to a country that said, 'This is your home,' but my Arabic was so broken, I couldn't really function." He came to America, earned an MFA from Carnegie-Mellon University, was a playwright-in-residence at Duke University, and eventually became a US citizen. The ceremony, he says, was surprisingly emotional. After years of suspension between countries, he'd found something like a home.

Like many artists who've lived on Capitol Hill for years, he's beginning to wonder how long he can afford to stay. "My rent has gone up astronomically," he says. "Like other people in this city, other artists, my back is slightly up against the wall." Another few rent increases, he says, and he may become another kind of migrant—an economic one. 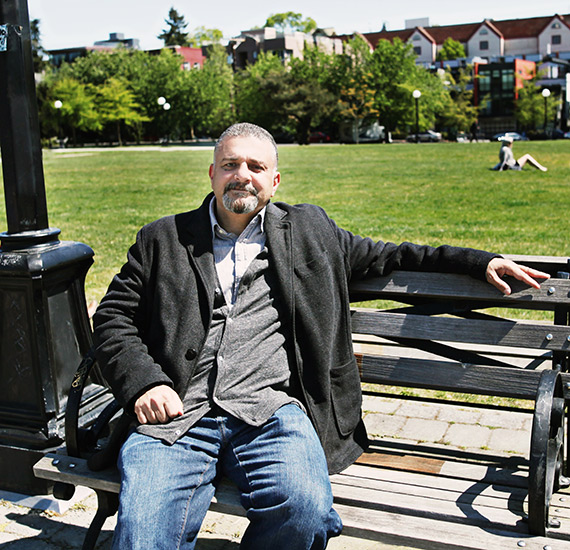 "My plays are quintessentially American," El Guindi says, "in that they're about that journey of coming to America and trying to make a home of it." Still, some theaters continue to treat him as that pernicious token, the "ethnic" playwright. That designation brings him some attention—but only up to a point. If theater is a supermarket, he says, "I'm on the ethnic-food aisle. But at least I'm in an aisle."