It doesn't have to end here. Lester Black
The Seattle Department of Transportation (SDOT) has been forced to modify its work plan for the Burke-Gilman Trail’s missing link, delaying work on a problematic section of the route till at least next year while construction on the trail's other sections continues.

The work delay is caused by the need to relocate a working rail line. Louisa Miller, the project’s manager, told The Stranger it wasn’t clear if the modification to the work plan would push completion of the project beyond 2020, which was the city’s latest estimate for finishing the long-contested section of the trail.

“It’s hard to say at this point,” Miller said. “We’re trying to keep things moving forward and it really depends on how our coordinated efforts with the railroad go in terms of if Phase 3 will be delayed beyond 2020.”

The Burke-Gilman Trail is a 20-mile non-motorized pathway that follows an old railroad alignment from Golden Gardens Park in Ballard all the way to the suburbs on the Northeast side of the city, following Lake Union and Lake Washington along the way. The trail gives cyclists one of the longest stretches of car-free commuting in the city, with the only interruption being a 1.4-mile stretch through the heart of Ballard. The trail ends near the Fred Meyer on NW 45th Street, forcing cyclists back into traffic to navigate across to the other side of Ballard and the trail begins again. 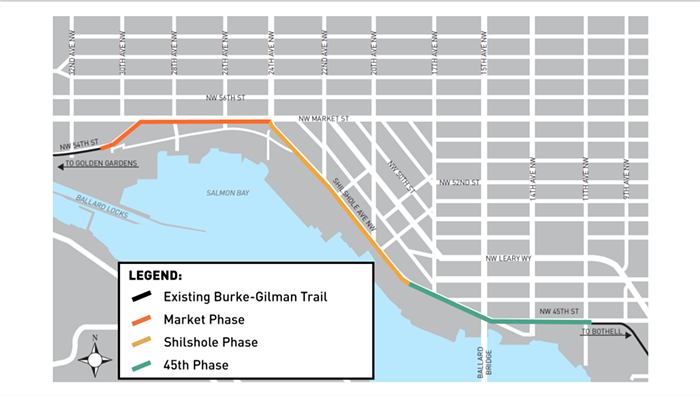 What was once two phases is now three. SDOT
The city has tried for decades to fill in this missing stretch but a group of local businesses has essentially waged political warfare against it. For decades they put political pressure not to fill in the missing link. That group then took their fight to the courts when the city finally moved forward with the project's plans in Spring of 2017 and was on the verge of construction. The group of businesses and labor groups, calling themselves the Ballard Coalition, sued the city in June of 2017, arguing that the city had not adequately studied the impacts of the trail. A judge ruled against the Ballard Coalition in February of 2018, but the Ballard Coalition appealed that decision and won on their appeal. In December of 2018, a Superior Court Judge ruled that the city had not adequately studied the economic impacts of building the route along Shilshole Avenue.

The judge’s ruling was narrow to just that section of the route, so the city moved forward with building along Market Street while they completed a statement of economic impact for the Shilshole Avenue section. Construction crews have been working on the Market Street section since March of this year and SDOT completed the extra economic impact statement in April, deciding to continue moving ahead with the Shilshole Avenue section, as opposed to bucking to the Ballard Coalition and moving the trail to Leary Avenue.

So the city is moving ahead with construction of the route, but now for this latest delay. The section of the missing link that travels down NW 45th Street west from the Fred Meyer and under the Ballard Bridge runs alongside a railroad track owned by the Ballard Terminal Railroad Company. The company rarely uses the track, only about 30 train rides a year take place on the track, but the city is still responsible for paying to move the tracks. The railroad company, which was a member of the Ballard Coalition opposing the tracks, is causing some delays to the design around this section, according to Miller.

“They have expressed some concerns with the way that we redesigned it, so we are just trying to work through some of those issues right now,” Miller said. These train tracks are causing problems for more than just bicycle tires. Lester Black
Faced with these design issues surrounding the railroad tracks, SDOT has decided to split the project into three different phases, rather than the earlier two phase split. Now the Market Street, the Shilshole Avenue, and the 45th Street sections are all put in different phases.

“This is really us trying to minimize delays to the project and just separate out the portions that have the railroad so we can keep movement going forward,” Miller said.

Miller said the city is still on track to complete the Market Street and Shilshole Avenue phases of the project by the end of 2020. Miller said it wasn’t clear yet if the 45th Avenue phase is delayed beyond 2020.