Jeffrey Epstein Is a Horrifying Person, But That Doesn't Mean He's a Pedophile 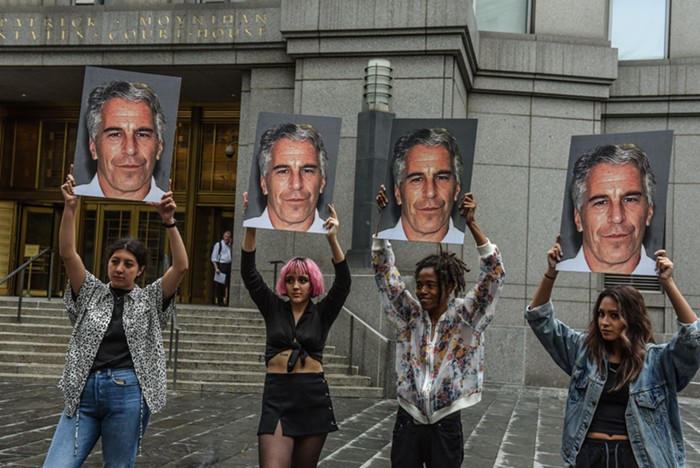 Protesters demonstrate against criminal sex offender and alleged sex trafficker Jeffery Epstein in New York City. Stephanie Keith/Getty
It did not take long after the news broke that billionaire financier Jeffrey Epstein had been arrested and charged with sex trafficking of minors for the Daily Beast, New York Post, Guardian, Politico, and many other media outlets to declare that Epstein is a "pedophile."

The reason journalists and editors would attach this label to Epstein is obvious: It's long been known that he's into underage girls. In the mid-2000s, he was arrested on suspicion of trafficking dozens of minors and, after being granted the plea deal of a lifetime by future former Labor Secretary Alexander Acosta, he served only 13 months in county jail (and he got to leave jail six days a week, on "work release," and hang out at home). The youngest of his victims, according to media reports, was just 14 years old.

But while 14-year-olds are considered children in this country, that does not mean that Epstein is a "pedophile." He may well be one—we'll know for sure when all the evidence against him comes out—but pedophilia isn't just a colloquial term for anyone attracted to people under the age of 18, even if that is how it's commonly used. It's a diagnosable psychiatric disorder, and according to experts, when media outlets conflate Epstein's alleged crimes with the clinical definition of pedophilia, it isn't just incorrect. It's also a serious disservice to those working to reduce or prevent child abuse in the first place.

Pedophilia is defined by the psychological establishment as a persisent attraction to pre-pubescent children. Obviously, the onset of puberty varies by individual, but it is the prepubescent element that distinguishes pedophila from other paraphilias, or aberrant sexual desires. As far as we know, Epstein's attraction was to teen girls, and while many of us may find this icky (I do), isn’t actually all that abnormal: “teen,” for instance, was the most popular Pornhub search term in the U.S. in 2016. Plenty of men are attracted to young women. There may even be evolutionary explanations for this, as female reproductive capacity begins to decline in our 20s. The difference is that decent men know better than to act on it.

Adults having sex with minors is both morally and legally indefensible (at least by contemporary Western standards), and the pass Epstein has gotten (so far) from the legal system is morally and legally indefensible as well. Still, that doesn't make him a pedophile, and the distinction is an important one. Sex researcher and clinical psychologist David Ley told me, “Media coverage of these issues affects general public perception. We don’t want every man (and woman) who finds teenagers sexy to think there is something wrong with them.”

The distinction between pedophilia (a disorder that appears in the Diagnostic and Statistical Manual of Mental Disorders) and, say, hebephilia or ephebophilia (which do not) is especially important when it comes to treatment. Michael Seto, a clinical psychologist and one of the world’s foremost experts on pedophilia, told me that while he understands why many people don’t seem to care about terminology when it comes to Epstein—which may come across as either hair-splitting or an attempt to mitigate his guilt—there is, indeed, an important distinction to be made.

“Clinically, an accurate diagnosis matters because the trajectories and outcomes for pedophilic versus nonpedophilic men who have sexually offended are different,” Seto told me. “Scientifically, we can't start our research if we don't define our terms accurately and as precisely as possible. A lot of my career has been spent studying pedophilia, and the research I've produced would be a lot less useful—maybe even useless—if I didn't distinguish interest in prepubescent children from young teens. Not making this distinction would change how we understand the etiology of pedophilia, how we assess for it, characteristics of offenders, and how we understand it relates to sexual offending against children and the risk of doing it again.”

Like other psychiatric disorders, pedophilia is not something anyone chooses, and there is plenty of evidence that pedophiles are, quite literally, born that way. Last year, I interviewed Ender, a non-offending adult pedophile (or, as Dan Savage calls people like him, a “gold-star pedophile”) who told me that he realized he was attracted to young boys when he was 14. Despite this, he’s never acted on this attraction. “Not abusing a child has never been a battle,” he told me. “It’s literally the easiest part of being a pedophile.” He knows it’s wrong, so he doesn’t do it.

Ender has found support in online groups for non-offending pedophiles and is fully committed to never acting on his feelings, but still, the attraction is there, and researchers increasingly suspect there is a biological basis for its existence. Brain imaging studies, for instance, have found significant differences in the white matter of brains of pedophiles and non-pedophiles, something sex researcher James Cantor calls “cross-wiring.” It’s as though when pedophiles see children, instead of triggering nurturing instincts, their brains’ arousal response is triggered instead.

“Pedophilia is something that we are essentially born with, does not appear to change over time, and it's as core to our being as any other sexual orientation is,” Cantor told the BBC. This is important because understanding the disorder is key to preventing pedophiles from molesting children. Attractions cannot be changed, but actions can be prevented, and treatments like cognitive behavioral therapy—as well as pharmaceutical interventions—have shown to be effective. (It’s worth noting here that there are other motivations for child abuse beside pedophilia; at the same time that not all pedophiles abuse children, not all child molesters are pedophiles.)

While no one knows the exact number of pedophiles (obviously, pedophiles have obvious reasons for not coming out), it’s estimated that around 2 percent of the population suffers from pedophilia. That’s 140 million people worldwide. And those people? They’re less likely to offend if they get support, treatment, and aren’t shunned as monsters by the rest of society.

Unfortunately, support is nearly impossible to get in the U.S. In Germany and elsewhere, there are evidence-based prevention projects and anonymous hotlines pedophiles can call for support, but in the U.S., broad mandatory reporting laws mean that therapists may feel obligated to report patients who admit to being attracted to children. This can keep pedophiles from seeking treatment in the first place. The public radio show This American Life aired an episode about this is 2014. The subject of the show, Adam, was a teenage boy who, after much internal struggle with his attractions to children, disclosed his feelings to a therapist. The therapist immediately (and against his wishes) informed his mom. Adam got lucky. Despite the fact that he’d never actually touched a child, the therapist could have reported him not to his mom but to the police.

Conflating pedophilia with child abuse may ultimately harm not just non-offending pedophiles like Ender and Adam, but potential victims themselves. Social scientist Brian Earp wrote about this in the wake of the allegations against former Alabama Senator Roy Moore: “If the goal is to protect children from harm, as it should be, then we should stop stigmatizing pedophilia per se and start stigmatizing (or keep stigmatizing) those who actually sexually abuse children for whatever reason, whether they happen to be pedophiles or not.” Stigmatizing pedophiles, treating them as subhuman, and condemning them for their attractions—not their actions—may very well make them more likely, not less likely, to commit an offense.

Nothing that's surfaced so far in media reports and court filings points to Jeffery Epstein being the clinical definition of a pedophile. His victims, as far as we know, are young, but not so young as to be pre-pubescent. Instead, Epstein appears to be a regular old abuser, not the victim of a psychiatric disorder sprung from his own brain. He’s simply rich, powerful, entitled, a creep, a convicted criminal, and willing to violate all kinds of moral codes to get what he wants. So while Epstein may not be a pedophile, in many ways, he's something much worse.