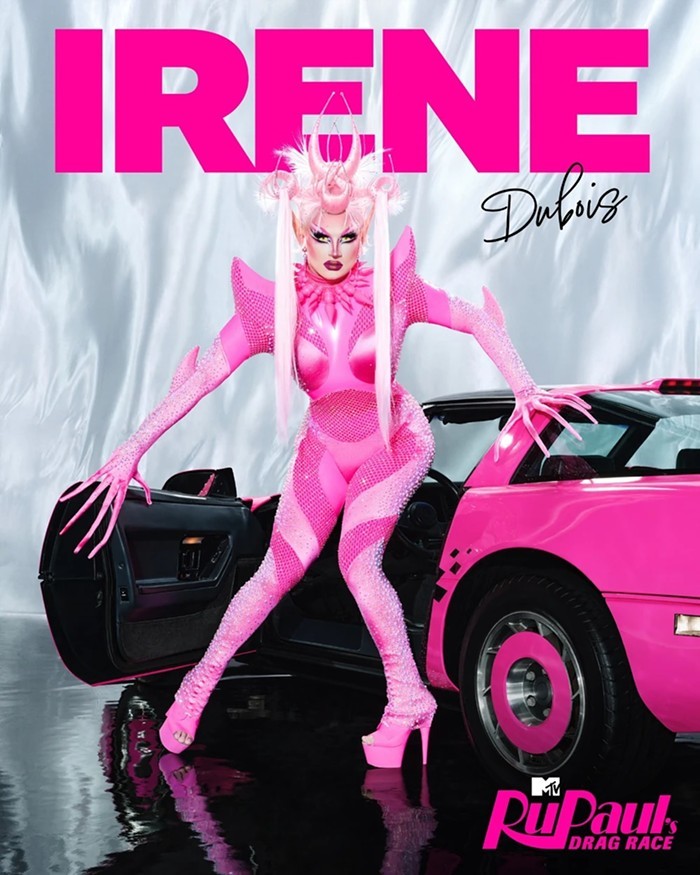 Here she is, world! Seattle sweetheart Irene DuBois makes her debut tonight in the latest edition of Drag Race, now in its 10,437th season. It’s an absolute thrill to see Irene on an international stage. She’s a tremendous talent, hard-working, and hilarious. Full disclosure: I’ve had the pleasure of working with Irene and, on occasion, hiring her for various projects. I can see why World of Wonder was eager to snatch her up.

But if you’re unfamiliar, you may wonder: Who exactly is this strange beauty? What’s her deal, anyway? Are we rooting for her or against her? Just where the hell does she get off?

Irene first strutted to my attention a couple of years ago after a performance at Kremwerk (I think; drag show memories can be so hazy). She stood out as someone who clearly put a lot of effort and polish into her work. There are, alas, some drag performers who have a tendency to engage in “walk back and forth” choreography, and whose familiarity with lip-sync lyrics goes as far as flapping their jaws open and closed like a hamburger bun. Irene is not one of those queens.

One of the first numbers I ever saw her perform remains among the top drag numbers I’ve ever witnessed. It began with her emerging on stage in a sort of half-drag, with her dress only partially worn and her makeup not fully applied. Two assistants buzzed around her, helping her beat her face and slip into her costume to a completely bizarre musical selection: "In the Hall of the Mountain King," the 1875 orchestral song that starts slow and builds to a frantic, furious climax. As Irene assembled her look, her facial expression grew ever wilder to match the music, and as it reached its crescendo and her transformation was complete, her assistants stood over her on platforms and dumped hundreds of dollar bills (real ones!) over her head.

This was only the first half of her number. The lights cut out at this point, and when they came back up, she treated the audience to an entire lip-sync to "Bohemian Rhapsody," an extravagant, theatrical, and super queer number that I’m surprised I don’t see more drag performers do. Maybe they don’t have the stamina? It’s long. Anyway, this was Irene’s finale number in the So You Think You Can Drag competition at R Place (RIP), and she won.

Irene’s vibe is something like an alien creature who’s arrived on Earth and hasn’t decided yet if she’s come in peace. Her looks are bizarre and otherworldly, often incorporating sci-fi shimmery material or prosthetics to resemble something in the background of a space station. (In fact, one of the other early shows of hers that I caught was all-Star-Wars-themed.) Her style is a fitting pairing with her close friend and fellow Drag Race sweetheart Bosco, whose vibe is more demonic.

Irene is also known for being unflinchingly direct, in a way that might not always be compatible with those who prefer their shade to be more passive-aggressive. Here she is in an early scene from Drag Race, in which she starts the season by directly challenging another contestant's wig claims:

Irene gagged Luxx a bit... for sure 😭 #DragRace pic.twitter.com/rHLITlEQl9

I have to say… the wig really does not look like it’s 40 inches, but also that’s some big talk coming from someone who looks like she fell asleep and someone built a Fraggle Rock set on top of her. Anyway! Drag Race is a silly fake gameshow, and everyone on it is either an actor putting on a show for the cameras or a lost tourist. My money is on Irene being in the first category.

So if you’d like to sample this tantalizing talent for yourself, to what lengths must you go? Well, fortunately, as a local gal, you have options aplenty: She’ll be hosting a Drag Race screening at Queer Bar tonight as part of the venue’s New Blood Series, she’s a regularly featured performer at Queer Bar’s Friday show MX., and she puts in regular appearances at Dreamland Bar & Diner’s weekly drag brunches on Saturdays.

But don’t wait around for tickets. If the past is any guide, Irene may soon be spreading her preternatural wings for larger venues. Past Seattle favorites like BenDeLaCreme, Jinkx Monsoon, and Bosco now enjoy international demand (among other Drag Race figures who are seldom seen around these parts). You owe it to yourself to take in an Irene show now, while the taking’s good.