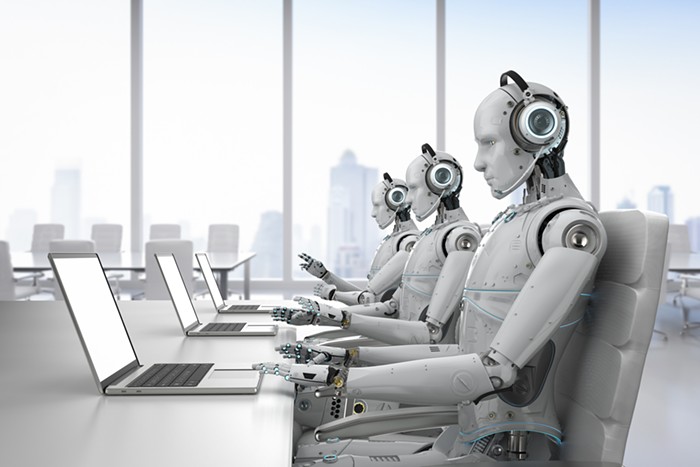 "We are the robots! We pay taxes!" PhonlamaiPhoto/gettyimages.com
There is a side of Alexandria Ocasio-Cortez that has not been properly or adequately discussed or examined. She is a communist, but her brand of communism involves a replacement of workers with robots. The old model of communism must not be confused at all with this new one. And one should not dismiss the latter as merely a utopian dream and as simply an extension of classical (or 19th century) communism. There are elements of AOC's communism, which has a name—luxury communism (I call it Jetsons communism)—that were presented by the leaders of the radical right-wing of economic thought, such as Friedrich Hayek and Milton Friedman. Martin Luther King, Jr. also supported the idea, and Richard Nixon tried to implement this dream, but failed.

The right supported guaranteed basic income because it would remove the government as the conductor of social welfare policy and reduce it to an institution that simple sends out checks to its citizens (something of this kind exists in Alaska, a deep Red State). The rest was up to the people, not the government or the political culture that's derided by the theorists of rational choice. With the kind of luxury communism AOC supports, however, what's crucially needed is a deep reduction in the cost of free time. At the present, it is bloody expensive, a fact that anyone who is unemployed can attest to. AOC is aware of this, and proposes a tax on robots, which, again, is not science fiction. The Jetsons are with us here. Their robot maid Rosie must send a part of her value to the public purse. The Europe Parliament voted on a robot tax in 2017 (it failed). But the point is that luxury communism cannot exist in a social order that aggressively punishes time that's not paid for. Homelessness is a result of very expensive free time.

According to the Verge, at SXSW 2019 AOC stated:

“We should be excited about automation, because what it could potentially mean is more time educating ourselves, more time creating art, more time investing in and investigating the sciences, more time focused on invention, more time going to space, more time enjoying the world that we live in... Because not all creativity needs to be bonded by wage.”

That said, I want to point out the crucial flaw of luxury communism: It misinterprets or misreads what technology, under capitalism, actually is.

I have written about this before in relationship to that bizarre human hunger to find other creatures as intelligent as humans in the vast cosmos. The thing that must be appreciated for my position—which is heavily informed by the critical theory of the late Moishe Postone—to be understood is a profound rethinking of this history of technological development. In my view, technological advancement was not uniform until capitalism and its mode of temporality was established in 17th century Europe. Many may be shocked to learn this, but this is pretty much a fact: There is nothing like a universal history of progress of humankind until capitalism kicks in. The idea (or feeling of moving forward in historical time) is so recent that economic historians have pointed out that even the first (but very messy) school of economics, 16th century mercantilism, does not contain the concept of technological advancement.

But how does any of this relate to AOC's luxury communism? Because the motor of technological advancement has rarely been humanist but, as we currently experience it, certainly capitalistic (humanism, as the record of Jesus makes clear, is older than capitalism). History, as progress, comes alive when capitalism confronts two problems: one, keeping production costs low (to expand surplus value), and, two, maintaining the production of new needs (to regenerate relative surplus value). The former leads to the robots and the latter to iPhones. The first is about production, the second about consumption. Both, however, are pressured to come up with newer and newer technologies for the sole purpose of maintaining the core of capitalism, which is a form of value that must not be confused with value as material wealth. It is, instead, value as value, which is a cultural construct—meaning, you will not find it in nature but as a product of our complex system of symbols.

Luxury communism, then, would retard the mechanism, value as value, that makes material progress happen. Outside of capitalism and its pressures, we do not have an economic system that makes things move in one direction, to better and better technologies. And this raises another question I will not address in this post, which is: What things are made by a system structured in this way? And are they really needed? Robots that kill jobs?