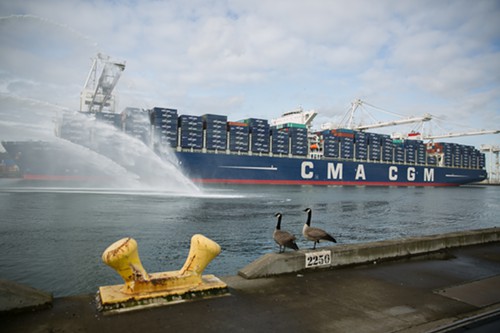 A ginormous container ship, the CMA CGM Benjamin Franklin, made its way to Terminal 18 at the Port of Seattle early this morning.

Cranes soon began lifting containers off the ship, possibly carrying recent Amazon purchases. In a press conference this morning, Stephanie Bowman, a Seattle Port commissioner, reminded the audience they were in a "unique position" to "get a close, personal look at the future of our region." Bowman also stressed the importance of a working waterfront, stating, "We want to see our working water front filled more with working cranes rather than more ferris wheels." 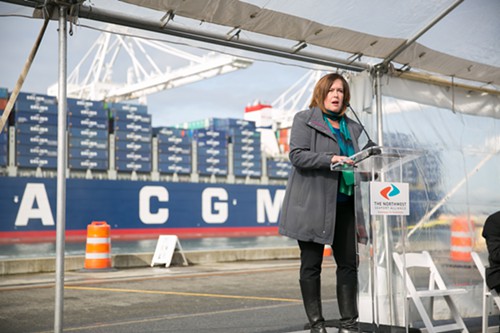 At 1,310 feet long, the Benjamin Franklin is one of the largest container ships in existence, twice as long as the Space Needle is high.

Promotional material at the press event gives a good idea of the scale of the Benjamin Franklin. Alex Garland

Mayor Ed Murray joined in the welcoming of the Benjamin Franklin to the Port of Seattle with an acknowledgement of Seattle's maritime past. "It's not just our past. It is our future... Terminal 18 is now one of the few places in the world that is ready to accept a ship of this size. We can talk about some of our world class industries in this city, we should add Terminal 18 to that list... Seattle is a hub for trade, it's a hub for trade for the state and it's a hub for trade for the region. Shipping is still at the heart of our identity. Shipping was vital to how we got here, and it will be vital to how we rebuild the middle class to create a vibrant and diverse economy." 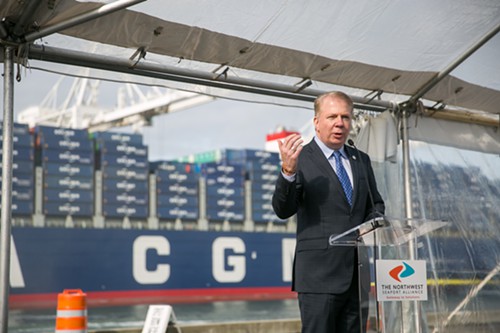 It's unclear how long the Benjamin Franklin will be in Seattle's port, but the gigantic vessel can be seen from multiple vantage points throughout the city. 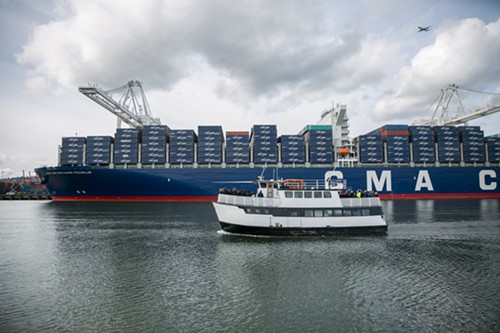 A tour boat is dwarfed by the Benjamin Franklin, moored at Terminal 18. Alex Garland
Comments 11
Tags: 2016
The Stranger depends on your continuing support to provide articles like this one. In return, we pledge our ongoing commitment to truthful, progressive journalism and serving our community. So if you’re able, please consider a small recurring contribution. Thank you—you are appreciated!
CONTRIBUTE NOW