Sex Workers and Supporters Marched Through Seattle, Visiting City and County Buildings, Before Rallying at Westlake 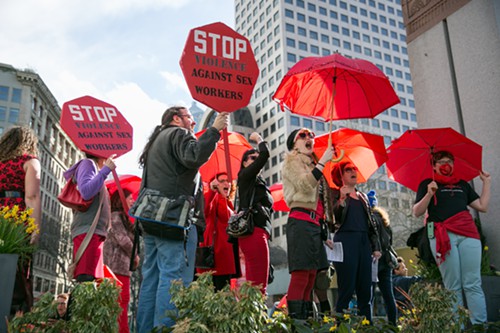 Sex workers, activists, and community supporters met at Occidental Park to rally and march in solidarity with workers in the sex industry around the world for International Sex Workers Day. The march left Occidental Park, stopped at the King County Courthouse and City Hall, and ended at Westlake Park. 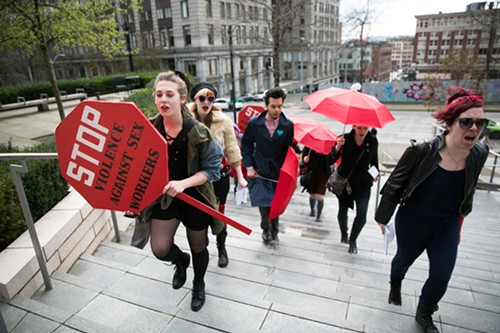 In addition to marching through Seattle (on the sidewalk), the demonstration of approximately 20 people chanted "sex work is real work, rights not rescue" and "outlaw poverty, not prostitution." They passed out informational flyers and delivered petitions to county prosecutors and each member of the Seattle City Council. Activists and sex workers are also sending petitions to state lawmakers demanding that they "consult with the sex worker community before passing laws addressing our industry." 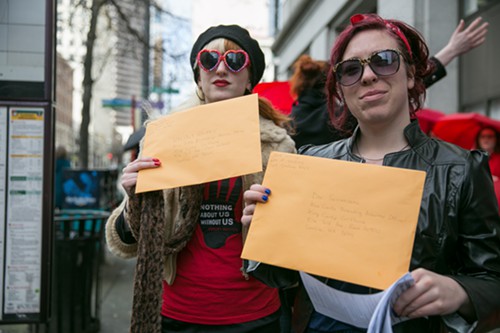 A petition is delivered to Dan Satterberg and Valient Richey, both King County prosecutors. Alex Garland

The demands sent to state lawmakers echo the demands made to the county prosecutors and the city council—things like "Engage our community in conversations to discuss best practices" and "Reverse the 2015 decision to rename 'patronizing a prostitute' to 'sexual exploitation'."

A common theme that kept coming up in my interviews with sex workers is to simply ask them what their needs are.

To that end: When I talked to sex workers, I asked them what they wanted you, the Seattle public, to know.

Here's what Savannah Sly, the president of Sex Workers Outreach Project USA, had to say:

Susannah also wants people in Seattle to stop "the simplistic narrative of sex slaves and happy hookers, it's a real disservice to the complexity of the lives of people engaged in the sex trade. We want society to stop painting this as a black and white issue that needs to be eradicated. We want for people to address the root issues of vulnerability like poverty and a complete lack of social services and affordable housing. All those things that make people really vulnerable to harm in a variety of industries, especially the sex trade."

Endza spoke about consensual sex work and an end to "end demand" policies.

Sierra discussed the trial happening today regarding the shut down of the website "The Review Board."

In addition to decriminalizing sex work, activists "think it's important for society and the sex workers rights movement to observe that this is just not a cis gendered white female issue, this is not a bunch of elite call girls. The people most impacted by these laws are people of color, people in poverty and transgender women specifically." 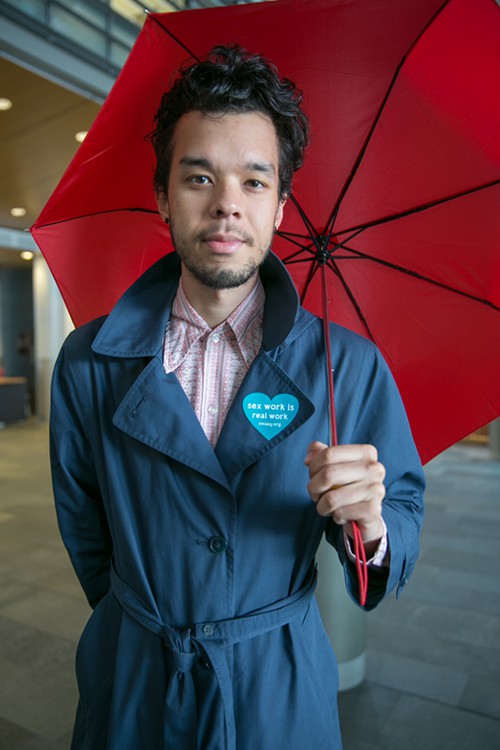 A demonstrator holds a red umbrella in City Hall as a petition is delivered to city council members. Alex Garland

Maggie said, "Sex workers are the ultimate capitalists, and yet we are disdained in this very capitalistic society."

Comments 2
Tags: 2016
The Stranger depends on your continuing support to provide articles like this one. In return, we pledge our ongoing commitment to truthful, progressive journalism and serving our community. So if you’re able, please consider a small recurring contribution. Thank you—you are appreciated!
CONTRIBUTE NOW