We Can't Take for Granted the Benevolence of Our Developers

[In the print version of this article, the markers on the map were offset by one inch upward. The corrected graphic is below.] 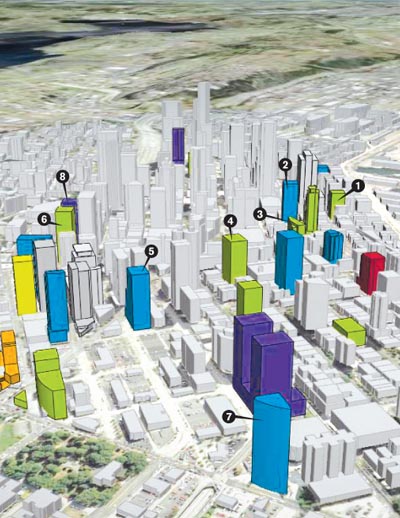 Building booms—like the one underway in Seattle—have a way of inviting developers to indulge their most recklessly hubristic impulses. Results vary. Out of Manhattan's hopping '20s came the Empire State Building and the Chrysler Building. Los Angeles's roaring '80s produced skyscrapers so lacking in charm that the skyline may need centuries to recover.

This is Seattle's chance. Local developers and architects make high-minded claims of "responsibility" to the city, and seem to mean it. But we can't take for granted the benevolence of our dictators. The skyline is a public good and so long as attention is paid, the public can rally behind a building it loves—or rout one it despises.

Today, Seattle's skyline sharply drops off, losing both momentum and boldness of design north of the business district. For the waterfront observer, there's almost nothing to see between the computer-chip shape of the Washington Mutual Center, at Seneca Street, and the iconic Space Needle, way up in Lower Queen Anne. Laudable, then, that this architectural valley is the area targeted for growth.

Some of the major developments taking shape are:

1. The new Four Seasons, 21 stories tall. Will stand at the corner of Union Street and First Avenue. Construction began in March. Will be made of custom light-mocha-colored metal panels and a glass curtain wall. Puts 149 hotel rooms below 30 spacious luxury condos, all designed around a truncated U shape facing Elliott Bay. Should stand out against the cube shapes scattered near its base. Due to be finished by spring 2008. Developers want you to refer to this neighborhood as the "Market District." (Another soon-to-bloom district is being called—somewhat audaciously—"Midtown," and it's defined loosely as the area north of Pine Street, excluding Belltown, and stopping at South Lake Union.) The sheer luxury—and cost—of the condos in this Market District is notable: A space near the top of the Four Seasons will run $20 million.

2. 1521 Second Avenue—housing for the slightly less filthy rich. Designed by Seattle-based Weber + Thompson. Height will be 440 feet, roughly the same as the corn-cob-shaped Westin Hotel. This one gets a distinctive fin shape at its top. Also, a smooth glass-curve body. No balconies. Construction begins this summer. Doors open fall 2008.

3. Condo tower at Second Avenue and Pike Street. Fits into that slice of skyline between 1521 and the Four Seasons. Height: 410 feet. Model displayed at June's Downtown Seattle Realtor Symposium suggests a bony frame like those seen in so many Vancouver, BC, towers. Developed by Seattle real-estate mogul Greg Smith. Designed by Hewitt Architects (who had a hand in Belltown's Harbor Steps Northwest Tower, the 16-story, L-shaped condo distinguished by its aqua-and-orange window panels).

3. The Second + Pine development—part luxury hotel (88 rooms), part condos (115), plus penthouses on two floors. From drawings, the retail floor looks like a prison. The rest of the building is a typical boxy beehive arrangement, with stair-step setbacks toward the top, with a fly roof. Next-door neighbor is the Macy's parking garage—for now.

4. Glass luxury-condo tower called the Escala. Thirty stories tall. Shaped a little like the chamber of a pistol. Makes a wide, imposing footprint at the corner of Fourth Avenue and Virginia Street. It's perhaps the most aspirational design proposed for "Midtown." Construction begins this summer. Yuppies storm in: 2008.

5. Residential tower, 32 stories tall, at Seventh Avenue and Westlake Avenue. Has a sidecar building of office space that's half as tall.

6. One blink to the east, at Olive Way and Eighth Avenue: Olive 8. Construction is underway. Will reach 36 stories. With slenderizing vertical lines running between punch windows, it will appear even taller than its 430 feet. Odd sculptural façade around the base suggests an egg vaulting through space.

7. 600 Wall Street, a residential tower in Midtown that looks like it wandered out of the business district. Glossy, sculpted body rises from a triangular site. Parabolic roof tops out at 400 feet. Designed by Weber + Thompson. Looks influenced by Vancouver designs. Exploits the city's new zoning codes, which allow more height in exchange for narrower building tops.

8. A tower at Eighth Avenue and Pine Street. Cloaked in mystery. (No artist rendering yet; little is known about the group developing it.) Roughly 45 stories tall—and 500 feet high, the tallest proposed. Will house a luxury hotel (140 rooms) and condos (185).

That last one—along with 1, 2, 3, 4, 5, 6, and 7—sounds like another building too rich for most of the public. Fine. Just remember, developers: While the prices may suit a few, the buildings will address the many. And we're watching.