We See Death When We See Crows

The cemetery where Bruce Lee and Brandon Lee are buried is often filled with them. Why? 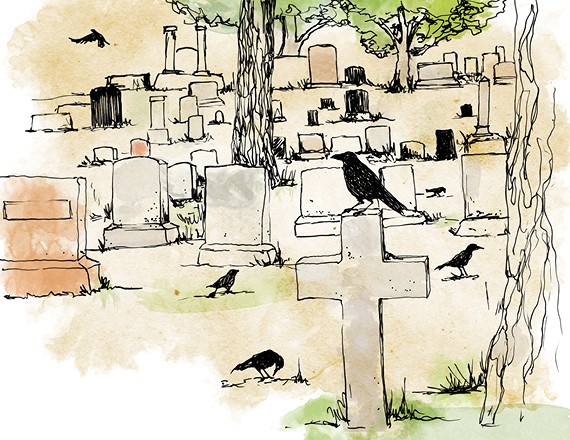 When I recently visited the cemetery, I was surprised to find it filled with hundreds of crows. Mary P. Traverse

Crows are culturally associated with death, the unknown, the underworld. The reasons for this grim reputation are numerous and historically profound. Those of us who live in cities cannot go through life without coming across a crow pulling at some dead thing on the street or sidewalk. This is shocking because there are very few animals we see being eaten by other animals in public—beside those in our restaurants.

Lyanda Lynn Haupt, author of Crow Planet: Essential Wisdom from the Urban Wilderness, thinks that this revulsion makes no sense because we often go out to nature precisely to admire the rhythms of life. But when these rhythms are visible in the city, it's somehow horrible. Moreover, it's actually harder to see dead things in a forest, argues Haupt, because little animals have a knack for hiding their deaths. But in a city, it's much harder for a squirrel or a mouse to hide when it's dying, because it's surrounded by lots of concrete and bricks.

Another thing: Crows will eat our dead bodies if given the chance. Their beaks are pronounced and sharpish. "They start with the soft eyeballs," Haupt explains, "and when the socket is empty, they eat the brain." (Human brains are actually made of fat and have the same consistency as butter at room temperature.) Yet, in this respect, how are crows any different from all other animals? It is quite normal for a living thing to make a meal of a dead thing. We do it all the time, and so do our pets. In fact, it was recently explained to me by science writer Katherine Bohannon that cats will eat their dead owner if they are stuck with them in a house or an apartment. "They really like the hands and the face," Bohannon says, as we eat a thick chunk of salmon at her dinner table. "That's why you should never own a cat. They are not loyal like dogs. It's rare for a dog to eat its owner. It will instead protect the body. Cats are not really members of the pack. They do their own thing and have no deep feelings about their masters." Despite this disturbing practice, the reputation of cats has not been harmed. We see them as almost royal and find their independence to be adorable.

The story of cats in history is all about their usefulness to us, how humans domesticated them because they kept rats away. But the story of crows always involves their proximity to death. "Crows were associated with the Black Plague, the Great Fire of London, and the Civil War, when they would follow soldiers to the battlefield," explains Haupt with a warm existentialism. "This is why when we see crows in the city, they open up a whole mythology of death."

Haupt is not a crow apologist and actually thinks there are too many of them in the city, but she has lots of sympathy for the birds because she knows they have a double existence in the human world. They are at once regular animals in the realm of the living and supernatural creatures from the land of the dead. "When we see a robin in a beautiful garden, it's just a robin in a beautiful garden," says Haupt. "We do not have a mythological relationship with them. They can fly over us without portending anything."

But not crows. In mythology, crows are not only associated with death but instruct us on dealing with it. This function of crows is captured in a wonderfully odd note in the Talmud concerning the first funeral in human history. The story, recounted in Crow Planet, goes something like this: One day in the land before time, Adam and Eve had before them the corpse of their son Abel but did not know what to do with it. But a kind crow noticed their perplexity and decided to give them a demonstration. It killed another crow, picked at the ground with its black beak, made a hole, put the dead crow in it, and covered it up. This was the birth of the graveyard.

In Native American mythology, crows are said to be our guides to the other side of life, to the place where we are to spend the rest of all time. This myth provided the background for the 1994 gothic horror movie The Crow. A woman has been raped, and her fiancé, Eric Draven (played by Brandon Lee), has been murdered. He is buried in a cemetery. A year later, a crow appears on his tombstone, knocks on it with its beak, and Draven breaks out of the earth with his bare hands. Instead of leading Draven to the land of the dead, the crow decides to lead him to the rapists/murderers to settle final accounts. The film is one long nightmare, with Draven breaking things, killing things, and quoting Edgar Allan Poe's poem "The Raven": "Tapping at my chamber door—only this and nothing more." There is even a scene in the movie where the crow pecks at a human eyeball.

During the final days of filming The Crow, Brandon Lee, the son of martial-arts icon Bruce Lee, was shot and killed in a freak accident. (A gun that was supposed to shoot a blank instead fired a fatal bullet into his abdomen.) He was only 28 when he died on March 31, 1993. He was buried next to his father in Lake View Cemetery on Capitol Hill.

Bruce Lee's tombstone is dark orange and has gold lettering and an image of him. Brandon Lee's tombstone is black with gold lettering, a smooth shape, and imageless. When I recently visited the cemetery, I was surprised to find it filled with hundreds of crows. The sun was setting in the trees, the sky was red with smoke blown in from the wildfires of Central Washington, and crows were calmly walking over graves or standing on tombstones. I even saw a crow on a cross. It was just so unreal. So is there something to their mythology after all? Where were the robins or the squirrels or the pigeons (not one pigeon!) or the other animals? Why were all of these crows hanging around the dead? Could they sense the death in the ground? Were they hoping that the earth might open up and present them with putrid meals?

The crows had to be here because of the sheer presence of the dead, I thought. What else could be the answer?

"They really like graveyards in the summer—especially this summer, when all the grass in the city is brown," Haupt said by e-mail after I visited the Lees. "Cemeteries have sprinkler systems, so the expansive grass is green and soft and the yummy worms come to the surface. Unlike golf courses, which offer something similar, the cemeteries are quiet—without golf carts and flying balls and men in bad polo shirts. I think it's also harmless for us to imagine that they just like hanging out among the tombstones because it makes them look cool and existential."

Haupt is currently working on a book about a relationship Mozart had with a sparrow.