Inside the Seattle Clinic That Survived the Darkest Days of AIDS

Dr. Peter Shalit's Office Building on Cherry Street Is Being Torn Down to Make Way for New Development 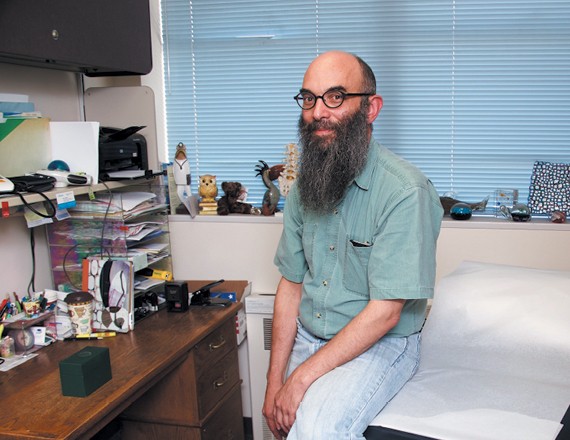 “It was like being in a battlefield,” Dr. Shalit said. MATT BAUME

It was on a recent visit to the First Hill office of Dr. Peter Shalit that I asked what it's like to treat HIV these days.

"Boring," he smiled, and then waved his hands. "I mean, it's not boring," he hastily added, "but..." He reached for a little green box sitting on the desk in the exam room. It was stamped with a caduceus (serpents coiled around a winged staff) and inside was a stack of index cards like a recipe collection. On each card was a list of dates, handwritten, most of them from the first half of the 1990s. Next to each date was a person's name.

"So many of these people were my friends before I started here," he said, studying them. "There was not a lot we could do."

He flipped through the stack of cards and then looked up. "I helped a lot of people die."

For decades, Dr. Shalit's office at 1120 Cherry Street has been a linchpin in Seattle's fight against HIV. Patients came to those low brick buildings for care, for testing, for difficult diagnoses, for treatment, and for options that no one else would provide. It was where patients learned how they would die—and more recently, where they learned how to survive.

But now the building is closed, and the practice relocated to the Cabrini Medical Tower. The Cherry Street clinic is being demolished and replaced with a sleek blue rectangle of glassy filaments, like an office block sprouted by Frozen's Elsa. Expected to open in 2019, the gorgeous new building will be untouched by the worst horrors of the epidemic.

Peter Shalit studied genetics in his 20s and had dreams of opening his own practice. He recalled comparing himself to a doctor on a popular medical drama of his youth: "It'll never happen, but I want to be Marcus Welby for the gay community."

Dr. Henry Kuharic offered him the chance to make that dream come true. Dr. Kuharic had been practicing since 1964, having grown up on a farm on Issaquah's Cougar Mountain, and was known in certain circles as Seattle's unofficial gay doctor.

When Dr. Kuharic retired, he offered the practice to Dr. Shalit. It was 1990, a time when doing HIV tests meant telling people that they were going to die young. "It was very grave," Dr. Shalit recalled when I visited him on the second-to-last day that his practice would be open on Cherry Street. Some pictures had already come down off the wall.

"AIDS was an evil demon," he said. "The artist would go blind; the model would get herpes that would eat up his face." Patients who had been getting care in the little brick medical building for most of their lives would weaken in a matter of months, or maybe a couple of years, and then they would be gone. As a ritual, Dr. Shalit would write every name and date of death on a card and tuck it into that little green box, year after year.

Dr. Shalit saw desperate patients try anything for a cure—some drank hydrogen peroxide, hoping to kill the virus. A doctor in South King County used a dialysis machine to wash patients' blood with disinfectant. "It was like being in a battlefield," Dr. Shalit said.

One of the more promising treatments was a drug called Crixivan, an experimental protease inhibitor. It was in such short supply that Merck, its manufacturer, established a nationwide lottery to determine who would receive treatment. Dr. Shalit was able to get a few patients on the drug, and then he received a call from Merck: Two new slots had just opened up, and he could have them. But that meant deciding which two patients he should choose to receive the potentially life-saving drug. "I picked my two sickest, most desperate patients who were still well enough to swallow a pill," he said. One of the patients he chose remains alive today; the other died. "Not surprising," Dr. Shalit said. "At that point, trying to save the life of a desperately ill person dying of AIDS was like trying to pull a jet plane out of a nosedive seconds before it crash-landed."

It was around that time that two of his patients died on the same day, shortly after confessing their fear of death to him. "That one day, I couldn't deal with it," he said. He broke down, hiding in a stairwell to bawl. "By 1995 or '96, I was planning how not to be doing this anymore."

And then patients started improving. Viral loads decreased. The new protease inhibitors worked. His staff would get lab work back, and after they recovered from their shock at the results, high-fived each other in the office. Conversation went from mitigating pain with morphine to thriving on drug cocktails.

As he described the shift in care, Dr. Shalit spilled a dozen multicolored pills out of a shot glass onto his desktop. "Today, you have options," he said, poking them. No more drinking hydrogen peroxide. No more lottery. No more wasting. Just pills—and a new shot at life.

A new life is what awaits the practice in the Cabrini Medical Tower, where the doors opened on August 24. Some familiar features, such as the carpet-covered walls, didn't make the journey. The rickety desk of Dr. Bill Miller, a doctor who passed away in 1988, will probably stay behind as well, Dr. Shalit said. "It'll go with the building."

The new office offers more room to provide fabulous care in a world-class medical building. The sleek new building that replaces the old location will be a marvel.

But those buildings won't know the thousands of patients who passed through the doors on Cherry Street. They won't have seen the illness and devastation and endurance. It's up to the survivors to carry those memories.

As I was leaving, Dr. Shalit tapped a stained-glass shelf on his desk and said, "The man who made this piece is in there." He pointed to the green box of names and dates, and then he cracked it open one more time and pulled out two cards.

One covered five months of 1995. It had 16 names, all patients who died from AIDS. The second card was for all of 2015 so far, and it had just seven names. One died of cancer, he said, another from ALS, another of a heart attack.

He remembered each one, reciting their cause of death from memory as we sat in the old exam room that was just large enough for two people, for a little green box full of names, and for the memory of a war zone receding into the past.

Editor's note: This article has been updated since it was published.