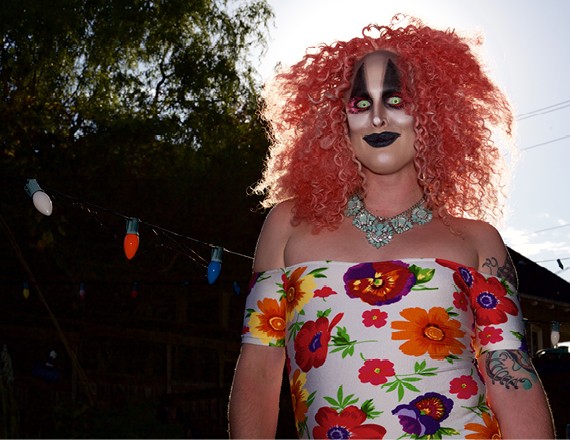 Across from me on the sofa sat a former navy officer in a bright floral dress, frizzy pink wig, and green contacts with stars around the pupils, watching me struggle to find the right words to describe his style of drag.

"You're kind of... a demon-Muppet?" I tried. Cucci Binaca seemed pleased with that.

"Creature-monster," he said. "A lot of people would say, 'Oh, you're not a drag queen.' But I AM a drag queen. I have lots of makeup on, I have eyelashes, I wear heels. I'm a drag queen. My makeup is definitely goblin, 100 percent."

Tyler Lane had been waiting for his time in the spotlight ever since his parents bought him a radio in the third grade. He'd lock himself in the bathroom for hours with the shower on cold so no one would know that he was living in front of the mirror, blasting music and lip-synching at himself.

But it wasn't until he joined the navy and was serving on a base in Bremerton that the lure of drag finally caught up with him. It was a risky time to put on high heels: Don't ask don't tell was still in effect, and even today you can be discharged for cross-dressing.

"It was very, very, very scary," he said. "My friends, when I first joined the navy, didn't know I was gay. They'd be like, 'Where are you going at night? What are you doing?' I can't tell them, 'I'm going to the gay bars to go suck dick.'"

So why jump into drag?

"I felt like there was something missing," he said, batting long pink eyelashes. "I had all this structure, but I didn't have any way to express myself. I had been dancing alone in mirrors for my whole entire life, and finally I'm like, 'I'm getting older.' This is something I'd always wanted to do, but I had a fear of really liking it and not having everybody like me do it. So I said 'Fuck it,' and I'm happy."

Tyler created Cucci as a defiant challenge not only to the navy but to drag conventions. She's an utterly frightful character, with the kind of scary-clown makeup that you'd expect to see on an ax-wielding maniac. But underneath the monster, Tyler is at his most vulnerable when he's in front of an audience.

"The first time I went out onstage, I was wearing a 1970s vintage dress from my grandma," he said. "My grandma, when I was a kid, would put a little bit of lipstick on me and let me wear jewelry. So it was very special for me to go out onstage in all of that great stuff."

And he found that the more time he spent scaring audiences as Cucci, the less tense he felt when he went back to being Tyler. "I suffered with depression and being very anxious inside for a majority of my life," he said. "But once I started doing drag, it all went away."

That's when the navy presented him with a choice: either ship off to Okinawa, where a midnight curfew would put a stop to Cucci's nightlife appearances, or leave the service.

"I like to play with that element of fear," he said, dabbing at his black lipstick. "'Cause people are going to pay attention to me. We're all monsters. Humans suck. I just happen to LOOK like a monster."

When Arson Nicki stepped out onstage at the Seattle Public Library's Banned! Books in Drag show last month, it was with black tape over her nipples, a ski mask over her face, and spiked sleeves of zip ties running along her arms like those of a Tim Burton creature. Halfway through her act, she chugged a bottle of stage blood and then drooled over herself while rubbing blood across her clearly male chest.

It was a tribute to the children's book Scary Stories to Tell in the Dark, and the audience of a thousand book-lovers roared with approval.

Michael Joseph Hanley gave birth to Arson Nicki one night last February. Throughout college, friends had been pressuring him to do drag, but he was too scared to give it a try. "I was afraid," he told me, "afraid of people thinking I wanted to be a woman. I thought I was going to look really stupid, and people were going to laugh at me for looking stupid. But the surprising part was I felt very powerful."

His first night performing in drag, he strutted across the stage in a bra and tights and pig nose, lip-synching to "All Men Are Pigs" by the Studio Killers, and something came over him. "In my past, people would always shit on me for being feminine. And so to take that effeminate quality and turn it around—that is an extremely empowering feeling. To take what people think should be a negative thing and make it positive, it was the greatest feeling in the world."

Michael had stumbled upon an unexpected muse: fear. His own anxieties, he discovered, could illuminate his performances. "When people ask me, 'How do you choose projects?' the first thing I ask myself is 'What am I afraid of?' And whatever that is, it is going to be the next focus," he said. Instead of shrinking from things that frighten him, he could draw power from them.

Afraid that he'd compare unfavorably to the feminine performers with whom he'd be sharing the stage at the Banned! Books show, he leaned into his anxiety with a persona that attacked a symbol of traditional drag: fake boobs. Baring a bloody boy-chest, he tore strips of tape from his nipples that left painful-looking red lines of irritation across his torso.

Fright, anxiety, and discomfort are Michael's motifs, even in his more lighthearted acts: He recently performed as an undead Marie Antoinette, complete with slit throat, handing out cupcakes before lip-synching to "Heads Will Roll."

Do not bother asking Amoania to describe her performances to you. Believe me, I tried.

"You should just come see them," she told me, repeatedly. "As a creative, I prefer to not reveal all of those things in an interview." She took a sip of water. "If you want to see the art, you need to be there."

Amoania's performance has entered a space that I think I'm going to have to describe as "post-fright." She's moved on from spooky drag to something new—and whatever it is, it defies all description.

Amoania started performing about six years ago, and back then she says her sole focus was on "being a freaky bloody scary drag queen. That's all that it was."

For her first act, she strutted into the War Room covered in googly eyes and a mouth full of fake blood. Accompanied by "Supa Doopa" by Les Georges Leningrad, a song that sounds like a woman arguing with an angle grinder, Amoania stalked around the room and grabbed preselected audience members to make out with. They, too, had mouths full of fake blood. After kissing, they'd vomit red goo and "die."

"It seemed really sexy to me at the time," Amoania said, "but also really scary."

It's no surprise that her acts were angry and confrontational. After growing up on Bainbridge Island, and then living in Seattle for five years, she'd grown bored with the scene.

She shook things up a bit with grotesque, aggressive drag acts, and then moved to San Francisco. But with that city converting itself into corporate housing for Facebook, there wasn't much use for an up-and-coming drag monster. Before long, she was back in Seattle with a renewed sense of purpose.

"When I moved to San Francisco, I saw people bringing performance art into clubs. Something you'd typically have to see in a gallery," she said. I pressed her for examples, and she described a performer who lit the stage solely with candles, and another who lip-synched to slowed-down pop songs.

Upon her return to Seattle, she found her appetite for strangeness whetted, but was unable to find anything as outré as candlelight and slowed pop. And so she created Cathedral, a monthly drag night now held at Cockpit where performers are free to stray as far as possible from conventional drag.

She still sees herself as striking a blow against the mundane. But now, instead of just angrily gargling blood and resenting her own boredom, she's creating the scene she wants to see.

"My goal is not to be a fright anymore, necessarily," she told me. "Not just going up onstage in drag for the sake of being shocking. Because that's boring to me now."

So what exactly is post-fright drag? I looked up Amoania on Vimeo and found a clip of her in a darkened room with a pig nose on her face. She listlessly disemboweled a tied-up man under a strobe light, smeared blood all over her slip, and then wandered into the screaming crowd.

But in person, Amoania demurred when I pressed her on the details of her show.

"I could describe these performances to you," she said, stretching her arms up above her head. "I could totally do that."