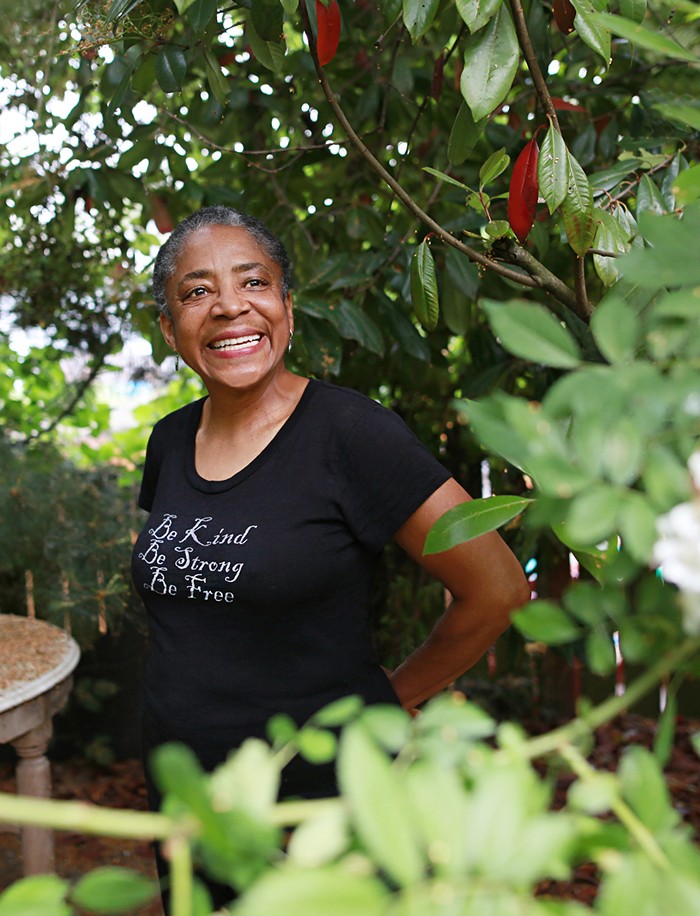 Drawer, painter, and sculptor Barbara Earl Thomas was the first artist we told this year that she'd been nominated for a Stranger Genius Award. Here's her reaction, photographed outside her studio in Columbia City.

When we talked to her by phone before the shoot, she said, "My shit ain't over!"

She has been making work in Seattle for a long time. As a student many years ago at the University of Washington, she studied with Jacob Lawrence. Even though she's nominated in the visual art category, she's also a funny, gifted writer of stories, poems, and nonfiction.

Her drawings, paintings, and sculptures contain what can't be spoken directly. Each scene is a mysterious tangle of lines and cuts, of shadows and colors adding up to people, animals, and weather—and sometimes it's difficult to separate them from each other. You can also imagine how they contain the multitudes of her past, what with her family's history in slavery, sharecropping, deep-sea fishing, the Great Migration (to Seattle, where she grew up), and her parents' death in a boating accident in 1988.

As a 2016 nominee, Thomas will be celebrated at the free Stranger Genius Awards party on September 24 at the Moore Theatre. She's also in the running for $5,000, no strings attached. To see the list of all 15 artists nominated this year, go to thestranger.com/genius2016.