Eat This Word: A Naughty Name for the Holy Grail

Originally Published in The Stranger October 12, 1992 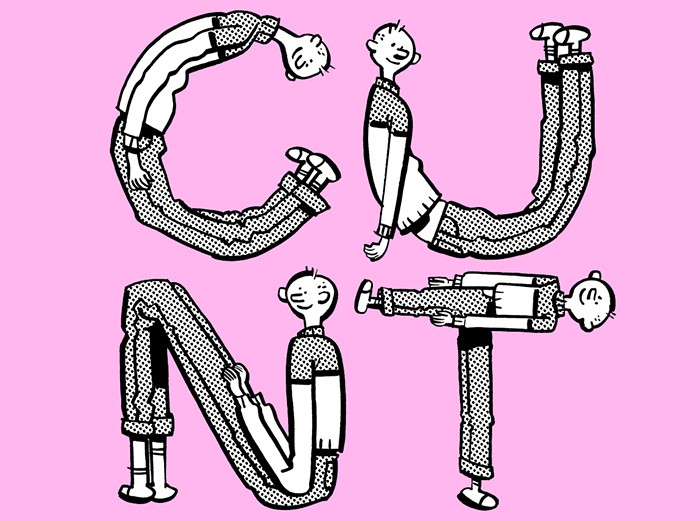 "I have yet to meet a woman named Cunt." steven weissman

DISTINCTLY, SPARKLINGLY, CRYSTALLY clear; I recall how pleased I was when I wrote the last word article, because I didn't quibble in the least about selecting a term to expound upon. I picked mama and mama picked me and we rolled 'cross the page quite happily.

But now it's kinda like, remember how you had to do a book report about Louisiana in the fifth grade, so you thought and thought about Louisiana, until one day you woke up and the rumpled blankets on your bed were shaped just like Louisiana, and so was the pool of milk in your cereal bowl, and when your family said "Good morning" it sounded just like "New Orleans?" You know how things seem to happen like that? Well, I've been noticing the hell out of words. It is really starting to appear to me that for the same reasons I have deep reverence for words, Big Daddies who own Big Chunks of America see the power of words with the interesting and paradoxical aplomb, recklessness and disrespect that they regard everything else magical.

Mazda is a car and you know someone who drives one. They might say, "That is my little blue Mazda over there in the Jack-In-The-Box parking lot." Mazda is the second name in the Persian sun god, Ahura Mazda. He had a brother named Ahrimann, and they go back to that archetypal brother dealie, where the Bible writers got the Cain/Abel, Jesus/Satan caricatures from.

Raisin Bran. Bran is good for heart disease and smooth operator bowel movements, right? Well, long before people thought about boxing up grains and dried grapes, Bran was a Welsh sea god, one of the trinity guarding either vessels that symbolically contained primordial ocean fluid, or the primordial ocean itself. Vessels such as the kind Bran protected led to the inspiration (and need) for legends of the Holy Grail.

Monday is named after the moon and was conveniently placed on the first day of our modern work week. Thus the moon-day is rather loathed in our culture. Wednesday is named after Odin (or Woden), a Norse god whose ordeal of self-immolation led him to be worthy of the title "saga" (seeing woman, prophetess), generally an honor bestowed only upon women.

And you know that paper company, Mead? Well, Mead was so named after the faerie queen, Mab, and was drunk by Celtic kings so that they could be considered gods. Guess what mead was made of. I'll give you a hint: It's red, and was later symbolized as wine in a chalice (that Holy Grail again) on the altar of Christ. Give up? Well, if you is a woman past puberty and before menopause, then the mead of Mab comes your way every lunar month. Mead was originally considered to nourish and bring manifest all life, all wisdom and all creation. Now it is associated with back-to-school supplies.

So, I've been positively bombarded with scads of everyday words that have all these weird stories and strange powers behind them. And the point of this is: I've had one helluva time thinking up just one word to dissect for ya. But if you will be kind enough to notice, I've mentioned the Holy Grail twice so far, and there just happened to be a word, a rather nasty naughty no-no word, that is not only quite related to the concept of the Holy Grail, but also contains something representing primordial fluid. This word is taboo, and makes all us ladies see red if someone calls us it. It is much grande powerful in the extreme.

So let me ask you a question. What happens to your pupils when someone calls you a cunt? Do they dilate with rage? I know mine have in the past. Now, why should a word so obviously related to cunning cause a twentieth-century woman such as myself to set off possibly violent repercussions unto the individual from whose mouth it came?

Well, I'll tell ya. I have been seeing that words like cunt (see also bitch, hag, crone) are prime examples of how gentlemen who wear phallic nooses around their necks (and their ancestors) have completely infiltrated the ways of the mother religion to the point where a sacred title of a priestess/saga/seer has evolved into an image of vaginal vileness so horrid that it isn't to be found in practically any dictionaries of our language.

Before the aforementioned gentlemen seized the books, a cunt was the title of a woman with the powers to call down the moon, perform the most religious of rituals and take no shit from no one unless the one happened to be God. Cunt is related to the words cunctipotent (all-powerful), cunicle (a hole or passage), and cuniculate (penetrate by a passage). Also in this family are the words cleft and crevice. Are you beginning to see the correlation between the sacred cunt and the Holy Grail? Both are vessels. Vessels were revered in the form of lakes, pools, wells, cauldrons, oceans and caves. Throughout the world, vessels of blood (primordial ocean fluid) account for the myths of creation. Vessels were always considered the holiest of the holy and intrinsically divine. Places like cunts are where life is nourished from within.

We've all probably been subjected to Sigmund Freud and his grand plan for penis envy among us ladies, but let us get real for a moment. How many words for penis are excluded from the formal teachings in our culture? Hell, some boys are even named Dick. I've yet to meet a woman named Cunt.

Finding out about the story behind cunt has led me to believe that there may just be a lot of things in this world that are thinly or otherwise veiled behind societal customs, to instill fear and distrust among the people when they stop to think about things like sacred vessels that have the power to bring forth new life.

So the next time someone calls you a cunt, say, "Thank You."

Even if they don't know the origins of the word, they are still quite aware of its power, as well they should be.

This article originally appeared in the Lesbian Resource Community Newsletter.

Inga Muscio later published the book Cunt: A Declaration of Independence.
Tags: Features 25 Years of the Stranger
The Stranger depends on your continuing support to provide articles like this one. In return, we pledge our ongoing commitment to truthful, progressive journalism and serving our community. So if you’re able, please consider a small recurring contribution. Thank you—you are appreciated!
CONTRIBUTE NOW