Dan Savage's Open Letter to Paul Allen on Lidding I-5, Righting a Wrong, and Leaving a Legacy 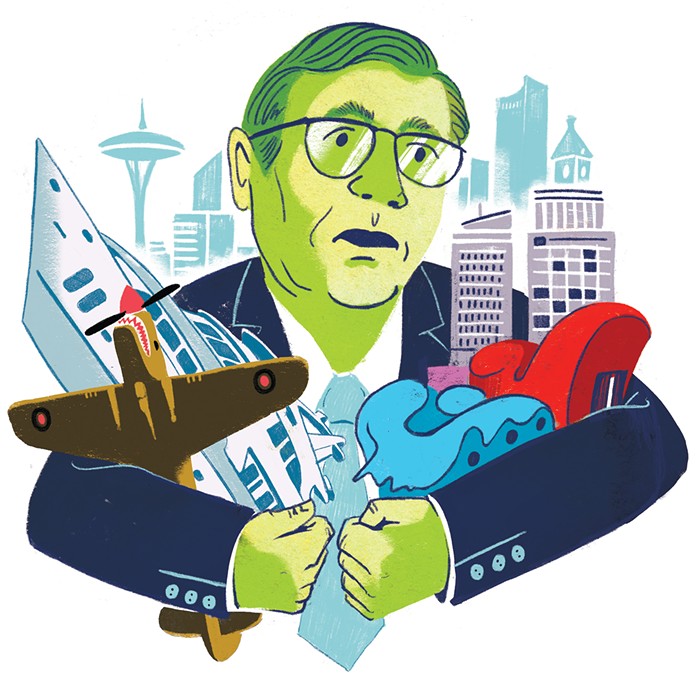 God, I fucking hate open letters. Some asshole writes something, addresses you in the first person, tosses it up somewhere, and you're somehow obligated to drop whatever you're doing and respond. I've made it a policy never to take the bait, Paul, because responding to one asshole's open letter means getting open letters from two dozen other assholes.

And fuck that, right?

But I'm writing you an open letter, Paul, because I'm an asshole, I guess. And because there's something I've wanted to say to you for 20 years, and I didn't run into you the one time I went to a Seahawks game, and the thing I've been wanting to say to your face all these years is suddenly relevant.

You really fucked up the Seattle Commons. But here's the good news, Paul: You have a chance to redeem yourself. There's a new effort to build a large urban park in the heart of Seattle. The Washington State Convention Center is holding an open house on December 7 to discuss a planned expansion and to showcase ideas for the public benefit package offered by the project—and they're inviting the Lid I-5 steering committee to speak. Maybe you should show up. Maybe you should get behind the Lid I-5 movement.

Readers of this open letter who aren't Paul Allen or weren't around in the mid-1990s may not have heard of the Seattle Commons. A brief recap: John Hinterberger, a columnist for the Seattle Times, thought Seattle needed a large central park—something like New York City's Central Park, Chicago's Grant Park, San Francisco's Golden Gate Park—and suggested creating one in South Lake Union. At the time, South Lake Union was a run-down, mostly empty neighborhood with some scattered (and cheap!) apartments, a little light industry, and acres of parking lots. Local developers had already transformed Belltown, a similar neighborhood, by packing it with rows of condo towers (and pushing out the cheap apartments and light industry) and they were eyeing South Lake Union.

You got behind the Seattle Commons, Paul, as the plan came to be known, and it immediately became associated with you and, by extension, with the tech boom and tech money and tech workers—and the resentments being stirred up by rent hikes and rising housing costs. (Sound familiar?) You loaned the Commons campaign $20 million to buy up property within the proposed boundaries of the park, you started buying up property around the perimeter of the park, you pledged millions more to endow a fund for maintenance and security, so that the park, if built, would not drain resources away from Seattle's other parks.

You were the man behind the Seattle Commons—the man underwriting it, the man who stood to profit most if the park got built.

And this is where you fucked up, Paul: Seattle voters were asked to tax themselves to pay for the construction of the park. The park would be built only if the voters agreed to cover the $111 million construction costs. The levy, over time and with interest, would cost taxpayers more than a quarter of a billion dollars.

We voted on the Seattle Commons twice: a 70-ish acre park in 1995, and a scaled-back 60-ish acre park in 1996. I supported the Seattle Commons, but the Stranger Election Control Board—now dominated by sensitive millennials, then dominated by fucking hippies—urged our readers to vote against the plan. It's possible the Commons would have passed if Seattle's Only Newspaper had backed it. So The Stranger fucked up too, Paul. But you fucked up worse.

Again, you stood to profit if the park got built. And the anti-Commons campaign pretended it could prevent you or anyone else from profiting off the redevelopment of South Lake Union by blocking construction of the park.

"The Commons proposes to change this commercial, light-industrial neighborhood to an upscale new 'urban village' using the park as a front lawn for luxury apartments and condominiums," the anti-Commons campaign wrote in the 1996 voters' pamphlet. "The Commons plan disregards the people who want to continue to live and work in South Lake Union."

Seattle voters rejected the Commons both times it went to the ballot. But voting down the park didn't save light industry in South Lake Union, or any of those cheap (and crumbling) apartments, and not a single parking lot was spared. The condos and office buildings went up anyway. Developers profited just the same—you profited—and displaced businesses didn't get any financial assistance to help them relocate, which had been part of the Commons plan, and the public didn't get a park out of the deal.

"Why haven't any of the new software billionaires this region has spawned put up the money?" Timothy Egan wondered aloud in the New York Times before the first Commons vote. You didn't take the hint.

This is what I've wanted to say to you for 20 years, Paul: You could have and you should have put up the money to build the park. There was a stock rally between the first and second Commons vote, and you made a billion dollars in one day. You should have cashed out a quarter of that day's take and paid for the park. (In all fairness, Paul, I can't find the headline about your billion-dollar windfall. Maybe it happened, maybe I was/am high. Even so, the value of your Microsoft stock—and you owned hundreds of millions of shares at the time—more than doubled between the first and second votes. You could have paid for the park by cashing out a miniscule slice of your stock.)

You should have called a press conference before the first vote and said, "Here's the money, build the park, name it after my mom."

Allen Park would be there now—Seattle's central park—and your name would be on the lips of Seattle residents. People would say, "We're headed to Allen Park," "My parents just moved into a condo near Allen Park," "We're playing softball today in Allen Park," "That's the part of Allen Park where the gays have sex in the bushes."

You've always wanted to leave your mark on the region, Paul, the place where you made your fortune. You hunger for a legacy. But no one is going to look at an office building or a condo tower 50 years from now and think, "Man, that Paul Allen, he was a visionary!"

What about the Museum of Pop Culture? Formerly the EMP Museum? Formerly the Experience Music Project and Science Fiction Museum and Hall of Fame? Formerly the Experience Music Project? Originally the Jimi Hendrix Museum? Sorry, Paul, but MoPOP is going to be a food court 10 minutes after you're dead. They'll be selling tacos in the lounges and playing laser tag in the Sky Church before you're in the ground. (And what did that building cost you? One hundred million dollars—more than paying for the Commons would've cost you, Paul, once you toss in staff, tchotchkes, programming, and paying consultants to change the name every five fucking years.)

Your philanthropic efforts, while worthy, are scattered and random. Your collections will be broken up, your sports teams will be sold off, newer office buildings and swanker condos will go up, MoPOP will be the world's bling-blang-iest food court. You will not be remembered, Paul. Bill Gates will be the man who cured malaria, and you'll be a footnote, if that, on a Wiki page about South Lake Union. (Strike that, Paul: You're already a footnote. Go search "South Lake Union" on Historylink.org. You're literally a footnote.)

"Unlike many major US cities (New York, Chicago, Boston, Denver, and Portland to name a few), Seattle has no identifiable central park," Scott Bonjukian wrote on the Northwest Urbanist late last year about the effort to lid Interstate 5. "Smaller open spaces like Westlake Park and the waterfront piers are great contributors to downtown life and should be cherished. But big public spaces like Chicago's Millennium Park and Portland's South Park Blocks are also essential to city living because they provide a refuge from the urban environment while offering a wide variety of amenities and programming for all walks of life. Establishing a large urban park in downtown would be one of the most transformative capital projects in Seattle's history, and there's only one place it could go."

Right on top of Interstate 5.

Like I said, Paul, there's a movement under way—a scrappy, grassroots movement—to put a lid on I-5 and create a large urban park in the dead space where that horrifying freeway cuts through the heart of the city. It won't be as large as the Commons would have been, but it would be Seattle's central park.

And you should pay for it, Paul.

There are large lidded freeway parks in other parts of the country, and a few smaller ones in this part of the country, too. This is something other cities have done and it's something we can do. Chicago, Dallas, Duluth, and Columbus have parks over freeways.

"If those cities can do it, Seattle can too," Matt Baume wrote in The Stranger earlier this year. "In fact, Seattle has done it already—twice. The construction of Sam Smith Park covered several blocks of Interstate 90 with playgrounds, homes, and businesses, while creating a scenic vista—precisely the elements destroyed to make room for I-5. And on Mercer Island, a park conceals another I-90 stretch."

A ribbon of park winding through Seattle, from Olive Way to Yesler Way, or from the Convention Center to Lakeview Boulevard, much like the Rose Kennedy Greenway in Boston. A large urban park that reconnects the city's densest neighborhoods to the downtown core, creating a greener, more walkable city and links to South Lake Union.

You have a chance for a do-over here, Paul, a civic mulligan. In one fell swoop—with one large check—you can atone for your Commons fuckup, Paul, and create your legacy. MoPOP is not a legacy. The Seahawks and the Trail Blazers and the Sounders are not a legacy. A central park for Seattle—Allen Park—now that's a fucking legacy.

Write the damn check. For once in your life, Paul, be a Carnegie not a carny.

P.S. Seriously, Paul, check it out: lidi5.org. For a vision of a large, green park that links Capitol Hill, downtown, and South Lake Union, go look at the pretty pictures at patanostudio.com.

EMP Is Now the Museum of Popular Culture. That's MoPOP to You.