The Secret History of Romantic Customs

Why we kiss, give flowers, write cards, and draw hearts. 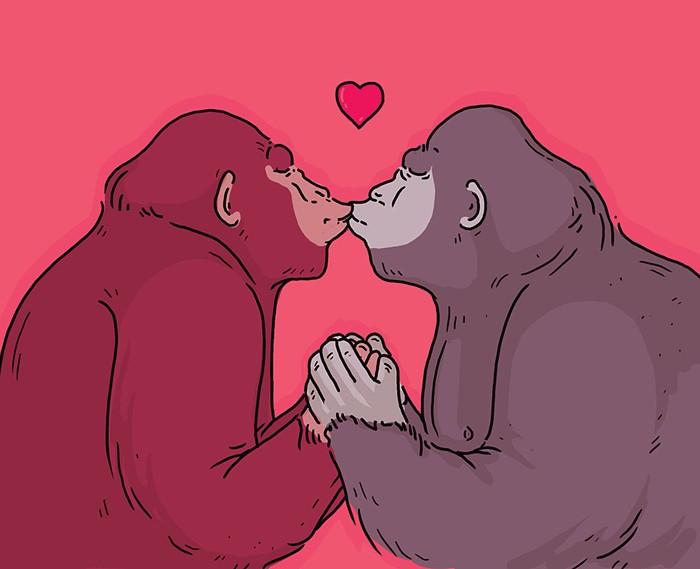 Charles Mudede would tell you we inherited the practice of kissing from other primates, who kiss as a way to create and test bonds. But an anthropologist might disagree. Kati Lacker

In Austria, it was once customary for young women to dance with slices of apples tucked beneath their armpits. When they finished dancing, the women would then give the sweaty fruits to their crushes as a sign of affection.

While this sounds incredibly hot to us now—almost pornographically hot—it is also weird. But it's not that much weirder than plucking a flower from the ground and giving it to somebody, or even touching your lips to someone else's to communicate affection.

As any pop song will tell you, words often fail to express what others mean to us. That's because language is cold, full of dead metaphors insufficient to the task of describing the hot rush of a new crush or the deep joy of long love. It's good for giving directions to the ballroom, but bad for communicating the way we feel when we watch our date glide across the dance floor with apples under their arms.

So we've developed these weird rituals that render our feelings in roses, gestures, foods, and art—stuff a lover can literally feel. Over time, though, these rituals lose their refresh value. They start to feel as old and rote as the phrase "I love you." When that happens, it's helpful to remember the reasons why we started doing them in the first place.


Why Do We Give Each Other Bouquets?

In order to secretly communicate with lovers, women in Turkish harems invented a language involving flowers and fruits. The language was called selam, and it was based on phrases the flora rhymed with rather than the feelings the flora evoked.

The example Louise Cortambert gives in The Language of Flowers, originally published in 1819, involves pears. If the woman wanted to say, "Let me not despair," she would find some way to deliver her lover a pear. (In Turkish, the words for "hope" and "pear" rhyme.) To make the language even more secret, the lovers would agree to a set of phrases they would want to communicate to each other during their initial encounter.

Cortambert credits a poet's enthusiastic but inaccurate endorsement of this practice for giving "celebrity in Europe to the language of flowers." Lady Mary Wortley Montagu praised these women for their ingenuity and wrote rhapsodically about using flowers to send specific messages. When this idea hit the over-mannered and extremely horny Victorians, the aristocracy went nuts. Interest in the newfound (to the Brits, anyway) field of "floriography" emerged, and writers began publishing flower-to-English dictionaries all over the place. Informed by a long tradition of color symbolism used by the French and English, red roses now officially meant love. Buckbeans meant "calm repose." And wild tansy meant "I declare war on you." There's evidence, of course, that ancient civilizations all over the world developed complex flower languages, but their ways were largely lost to time.


Where Does the Heart Symbol (♥) Come From?

The earliest clear depiction of an "amorous heart"—that upside-down butt shape associated with love—first shows up (according to Marilyn Yalom's The Amorous Heart: An Unconventional History of Love) in a medieval allegory called The Romance of the Pear. In an illustrated drop cap of the letter S, a servant boy extends his master's heart to a young lady, who is meant to pass along the emblem of affection to her mistress.

The gesture of offering one's literal heart derives from a French notion of courtly love called fin'amor, which was developed by troubadours. In that tradition, the singer delivers his organ "to only one woman, with the promise that he would be true to her forever." But why is the heart kind of shaped like a pine cone? "Because that is the way medical authorities had described it since the time of the Greek physician Galen in the second century CE," Yalom writes.

You can find the two-lobed shape itself all over antiquity. Early examples can be found dotting one of the horses of the apocalypse in a medieval illustration, lining a sixth-century Persian drinking bowl, and right smack in the middle of ancient Roman coins depicting the seed pods of silphium, "a now-extinct species of giant fennel" widely used back then as a form of birth control.


Why Do We Put Chocolates in Heart-Shaped Boxes?

According to The Oxford Companion to Sugar and Sweets, British chocolate manufacturer Richard Cadbury created the first heart-shaped box for chocolates in 1868 as a way to capitalize on the increasingly popular celebration of Valentine's Day. Victorians famously loved keeping objects of affection (including snips of pubic hair and old dance cards) in small boxes, so this was a very good idea on Mr. Cadbury's part.


Why Do We Give Each Other Valentine's Day Cards?

The first Valentine's Day card was sent from jail during the Hundred Years' War between France and England. Charles d'Orléans, a warrior-poet captured at the Battle of Agincourt and thrown in the Tower of London for 25 years, "addressed his wife in a letter as 'ma tres doulce valentinée' ('my very gentle valentine') and assured her that his love for her endured in spite of everything," according to Yalom. During this era, French poet Oton de Granson and English poet Geoffrey Chaucer were both credited with writing the first poems associating Valentine's Day with the arrival of birds "as harbingers of springtime and love." In the mid 1600s, rich people in England celebrated Valentine's Day as a kind of multiday romantic white-elephant party, where men "drew lots with women's names on them, and the man who picked a certain lady's name was obliged to give her a gift." The practice trickled down to the hoi polloi, and now here we are.


Why Do We Kiss Each Other?

Evolutionary behaviorist Rafael Wlodarski will tell you that people kiss as a way of selecting candidates for short-term relationships and for maintaining affection in long-term relationships. Citing research from Israeli evolutionary biologist Amotz Zahavi, my colleague Charles Mudede will tell you we inherited the practice from other primates, who kiss as a way to create and test bonds. But anthropologist Shelly Volsche will tell you that less than half of the 168 cultures her team surveyed even kiss romantically at all, aiming to "dispel the idea that romantic kissing is universal or evolutionarily beneficial."

I'll tell you that we kiss because a kiss is the purest word in love's vocabulary. Or maybe it's because the eyes can only kiss so much before the tongue gets jealous. (After all, love does require "a progressive shortening of the senses," as the late William H. Gass had it.) In darker moments, I'll admit we kiss because some morbid part of us needs to feel the skull behind the lips, in partial fulfillment of our death wish.

The short answer is no one is quite sure, so we need to conduct more research. Happy Valentine's Day.