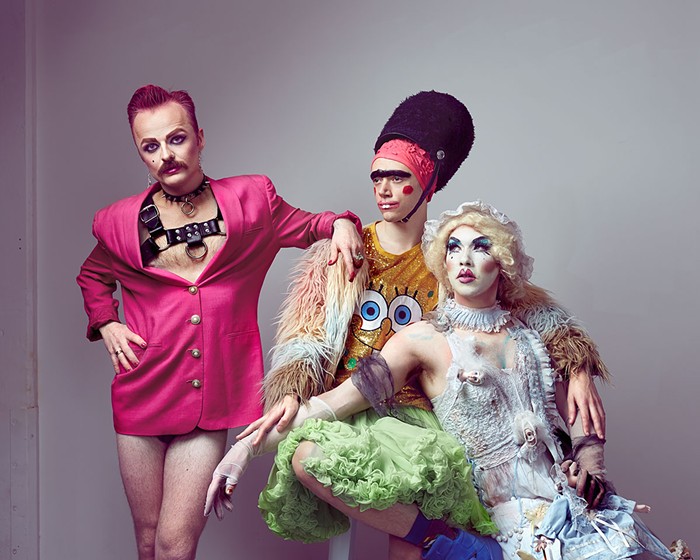 The drag clown Miss Texas 1988 was determined to wear three different looks to Rapture, the monthly party at the Timbre Room. Her first outfit, a crimson skirt paired with black kitten heels, felt lackluster, so Miss Texas was surprised when a normcore stranger followed her outside to tell her how good she looked. Miss Texas was even more surprised when the man began making out with her in her messy car. "Sorry about all the cardboard—it's for props," Miss Texas joked. The man kissed her and said, "Don't you need to change?" She did. In between gropes and bites, Miss Texas slipped into her second look of the evening: a ghostly, sloppy dress with small baby-doll heads sewn onto it.

Instead of enjoying the hot, unexpected stranger in her car, she worried these baby-doll heads were far too extra. "Uh, hope you're not weirded out by this," she said, while the stranger moved his hands up her thighs. "Not at all," he said, before sucking on her neck. "That's nice," she said, and then they finished their business. She swears he grabbed a doll head while coming.

Uh Oh (the alter ego of the author of this piece) wasn't trying to be sexy, let alone liked. Uh Oh's greasy unibrow, fake buckteeth, and misshapen red cheeks were supposed to be "anti-drag" at best, and funny at worst. But Uh Oh's boyfriend finds this look "totally hot" in "a weird way."

Strawberry Shartcake swirled around the tiny dance floor at Pony in a look she described as "very Eurythmics"—an oversize hot-pink women's blazer, loud pumps, no pants, and a jockstrap. She was giving pure genderfuck sex appeal, and one man, a six-foot-tall, barrel-chested daddy, wanted in on it. "I wanna fuck you so bad," he said. She gasped, "I'm in drag!" "I don't fucking care," he said. "Fine, come show me your dick," she said.

In the bathroom, the dude whipped out his cock. But he was too soft to play. After 10 minutes of fumbling, Shartcake was inspired by something Gloria Steinem had said at the inaugural Women's March, and she ended the bathroom soiree by saying, "No more waiting for daddy."

You can catch all three of these messy monsters the first Saturday of every month at Kremwerk hosting Arthaus: Drag Haus Battle Royale.