You Can't Drink On Light Rail, but Here's Where You Can Drink Near Light Rail 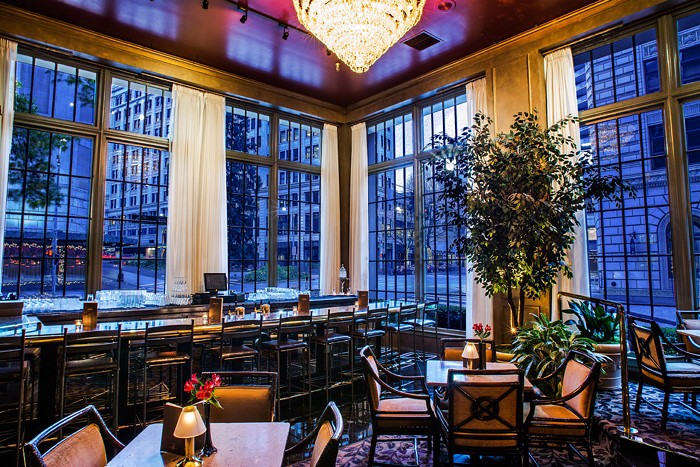 Oliver's Lounge is a short walk from the Westlake Station. Autumn Adams

If you are a drinker, this is a station you need to know about. Othello Station, by contrast, has lots of great places to eat, but no bars of distinction. The same goes for Rainier Beach Station. The bars in Columbia City, however, include the popular Royal Room (5000 Rainier Ave S), Lottie's Lounge (4900 Rainier Ave S), and Island Soul (4869 Rainier Ave S). The first bar is a great music venue, the second is relaxed, and the third is just cool. But what I love most about Columbia City (and Hillman City, which is just down the road) is that there are bars aplenty. You arrive at the station, you walk east for five minutes, and there it is: bar after bar after bar.

If you ever find yourself at Mount Baker Station, don't bother leaving the train if you are looking for a place to drink. Take the train one stop farther to Beacon Hill Station, step off the train, enter an elevator, rise up to ground level, exit, and walk to the Wine Station (2533 16th Ave S), which is open from Wednesday to Saturday. Run by Luis Rodriguez, owner of Seattle's most culturally important cafe, the Station—which is across the street from the Wine Station—this bar offers affordable wines, great little bites, live Latin jazz, and an atmosphere that's perfect for a first date. If you happen to be looking for a place to drink on other days, then visit Baja Bistro (2414 Beacon Ave S), a small bar that is urban and so gay-friendly, it's part of what writer David Schmader once called Little Castro.

One evening, I walked into Fort St. George (601 S King St, Suite 202)—a bar only two minutes by foot from the station, a bar that serves Japanese "comfort food"—and heard a hiphop track whose beauty smashed my heart almost immediately. It's called "Luv(sic) Part 3," and it features Japanese rapper Shing02 (he can kick it in English and Japanese). The track, which was produced by Nujabes and released in 2005, has a rippling piano loop set to a flow of shamelessly melancholy strings and a bass that pulls hopeless feelings out of the depths of your being. After learning the producer's name from the bartender, Matt Pechar, I looked him up on the web and learned he was killed in 2010 in a car accident that happened on Tokyo's Shuto Expressway. Those who say the beautiful are not yet born are wrong. The beautiful are always dead and gone.

McCoy's Firehouse (173 S Washington St), which opens at 8 a.m., has firefighter apparel on its brick walls that face the bar. There are also firefighter helmets hanging on the arch above a high-tech jukebox. And the wall by the passage leading to the restrooms is plastered with badges from fire departments around the country. Yet, I have never seen a firefighter in this bar. Maybe they're not in their uniforms when the time to save lives and houses is over and it's time to drink. Nevertheless, McCoy's has a mood that's defined by its bartenders, who are some of the best humans in this city.

There are two bars here you should know about. Lecosho (89 University St), which is two blocks down from the most hidden entrance of the underground section of light rail (it's on the southwest corner of Benaroya Hall), has a happy hour that in my estimation is second to none. The best inexpensive wine is served, and the menu includes a superb grilled homemade sausage with lentils du puy and a soft-yolk egg. Another nearby bar, the Diller Room (1224 First Ave), has lots of local history (it was once a speakeasy with a Chinese laundry as a front), and is in the shadow of Hammering Man (outside Seattle Art Museum). The wine here is drinkable and the bartenders are friendly enough, but what really recommends this place is that it's not dominated by regulars. No one really claims it as their own. The faces in the old Diller Room are, like the new Seattle, constantly changing.

I can never get enough of Oliver's Lounge (405 Olive Way). I'm deeply in love with this bar's windows. These windows are huge and have a view of Macy's (whose basement is connected with the light rail station) and the 80-foot sequoia that became famous for 24 hours in March of 2016 when a man climbed to its top and refused to come down. History has decided to name this incident Man in Tree. Oliver's is not cheap, but it does serve free food at happy hour. But when you drink here, you are really paying for the windows—for the excellent people-watching they provide. Also, if the day is sunny and you are, like me, not one who enjoys drinking outside, and yet at the same time you don't want to be denied the reptilian pleasures of sunlit flesh, Oliver's is the place to be. Thanks to those marvelous windows, you are at once inside and in the sunlight.

It can be argued with some confidence that the most urban intersection in Seattle is at Broadway and East John Street, particularly at rush hour, when big-city crowds flow up the long escalators and out of the station's main section. Once on the street, these crowds are at the heart of one of the densest neighborhoods on the West Coast. Across the street from the station is Nacho Borracho (209 Broadway E), whose facade is decorated with neon advertisements for Mexican beers. Once inside, you are greeted by festoons of colorful lights and banners. Behind the bar are machines that turn luridly lit, slushy booze. For a long time, one of those slushy machines contained an avocado margarita that could not be beat; more recently, it has been replaced by a pineapple margarita that cannot be beat. Also, some of the best bartenders in the city work here. Each one has excellent taste in music.

The best-designed station on the line (so far) is the University of Washington Station, and yet this is also the station farthest from any bars. However, if you are willing to ride to the station and then walk or bike the Burke-Gilman Trail (made exclusively for bikes and pedestrians), you can get to the College Inn Pub (4006 University Way NE) after about a 15-minute walk (or a five-minute bike ride). In 2021, the University District light rail station will open, which will be much closer to the College Inn Pub. But for now: You walk/ride from University of Washington Station, you walk down the pub's wooden steps, you open the wooden door, and you enter a dimly lit underworld of wooden tables, benches, and booths. I have yet to meet a bartender employed by this establishment with a soul not made of gold. This den of students and professors is always darkish and dusty, like an old library or a neglected set piece for a play set in medieval times.