Please Don't Tell the Authorities About My Pet Squirrel

An unlikely bond with something the cat dragged in. 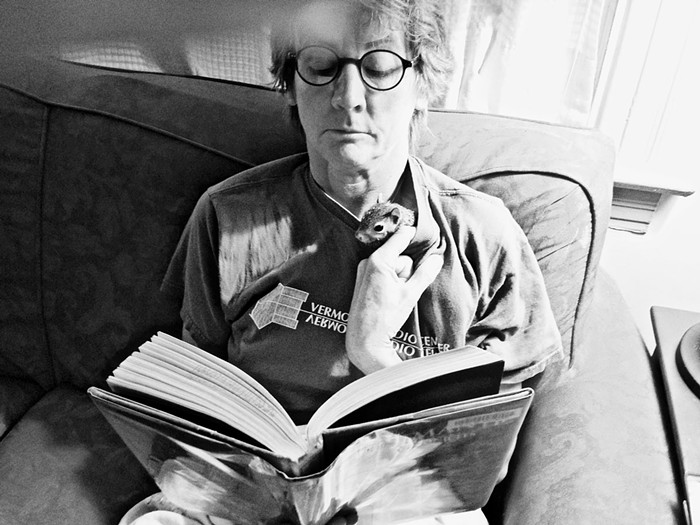 When I sat at my desk, I put him inside my sweatshirt.
Tweet

I was working in my writing studio in the backyard with the door open when I heard my cat make a nasty sound. She was inside, in a corner by a bookshelf, batting something around. I hated it when she brought in half-dead, half-eaten birds. "Bad kitty!" I yelled.

I yanked her up by the scruff of her neck and she dropped what she was torturing—not a bird, but a baby squirrel. It was little and gray and its tail was bent, though not bloody, from where the cat had bit it. Its eyes were open and terrified and it had little tiny ears. I picked it up.

It was just starting to get fur, so it was soft and warm and I could feel its heartbeat in my hand.

I put the squirrel in my shirt pocket while I called Animal Control. It looked up at me with its giant tiny eyes. I told them I found a squirrel and asked: Could I bring it in?

"Is it a gray squirrel?" the woman asked.

The woman cleared her throat. Gray squirrels are not native to the region, she said, so if I brought it in—and here she hesitated—"we'll have to take care of it."

Then I understood that she meant they would have to put it down.

Very official-sounding, as if the KGB were listening in, the woman told me she could not give advice on how to care for a non-native animal. "But," she whispered, "there's stuff on the net."

So I went online.

The squirrel had a little pink sticking-out finger thing in its middle, which I assumed was a pecker, so he was a boy. I named him Squirrel.

I fed him on a schedule several times a day. I set my alarm for 5 a.m. and was always sure to be home when he needed to be fed. I'd never thought of myself as mom-like, but my wife, who is both a mom and a grandma, told me I was a good one. I thought she was teasing me and I felt embarrassed and slightly stupid, but my wife said she wasn't teasing, she meant it. I really loved that squirrel.

When the squirrel began to climb out of the box, I made him a new home in a cat carrier with a door so he couldn't get out. He still needed me to feed him with the dropper, which I did, grabbing him by his middle and sticking the dropper in his mouth. He grabbed me as he drank, holding my thumb and fingers in his paws. When I sat at my desk, I put him inside my sweatshirt, over my T-shirt, and he slept while I worked. Whenever I'd come into the house for a break, my wife said she could see where the squirrel was sleeping on me by the lump in my clothes.

After he started getting teeth, I bit blueberries in half and put them in his mouth so he could suck-chew out the pulp. After he became able to break through the blueberry skin himself, I chewed peanuts into little bits and put them in my hand for him to eat. Peanuts became his favorite.

The first time I took him outside and put him on the ground, he was frightened and ran back under my shirt. I kept putting him down on the ground next to me until he didn't go back in my clothes but stood there and sniffed the air. After a few times of that, he took his own few steps out onto the grass. Then he tried to climb our wisteria bush when he could. One time, another squirrel came into our yard and he just stared at it and then ran back into my shirt.

After he started digging the ground like he was teaching himself to bury nuts, I let him run around on his own during the day, but he came back in the evening to sleep in my studio. His fur completely covered him now and he had rodent teeth and, aside from that one bald bent place, a bushy tail. Though not full-grown, he was old enough, according to the internet, to be on his own.

I remember the first evening he didn't come back. I was sitting in the backyard, in front of my studio, where he usually came back at the end of the day. When I realized he wasn't coming back, I suddenly felt tears all down my face.

But he came back the next day, and then most days after that. Our back door is glass panes framed by wood, and he'd come and stand up on his hind legs so we could see him through the door. Then I would grab a peanut from the jar and open the door and hold the peanut out at waist level and say, "Come on up!" and he'd scramble up the leg of my jeans and take the peanut from my hand.

One late February day, I was doing the morning dishes in the kitchen when I looked up to see him at the back door in his usual place, but this time he was not alone. Rather, he was glued front to back with another squirrel and enjoying (it appeared) breathtakingly rapid squirrel coitus. He'd brought his sweetie home to meet his moms on Valentine's Day!

Not too long after Valentine's Day, my wife and I noticed that the squirrel was growing boobs. My wife, a former medical professional who once specialized in women's health, suggested the squirrel was pregnant. Later we learned that determining the sex of squirrels is quite difficult. Not until males show the ginormous balls they develop during mating season, or females develop the boobs they will need to nurse their young, is it readily apparent who is who.

Perhaps the cute pink finger thing I saw was not a pecker but a bit of umbilical cord? A female squirrel gonad? I suppose I could look it up, but I'd rather not know.

I'd also rather not know for sure if he—she—had her babies or not. We didn't see the squirrel for several weeks, in which time she and the paramour she'd brought home to meet us could easily have welcomed several babies into the world.

The next time we saw her—we knew it was her from the bald bent crook in the tail—she had been flattened, run over by god knows how many cars on our street. We buried her in the backyard by my studio door.

I still think of the squirrel a lot, especially when other squirrels—her kids? grandkids?—show up at our back door. Sometimes I grab a peanut from the jar, hold it out, and say, "Come on up!" And sometimes they actually scramble up my leg to take the peanut from my waiting hand.