Everyone Should Put Weed in Their Butt

I get extremely painful periods. Pot suppositories changed my life. 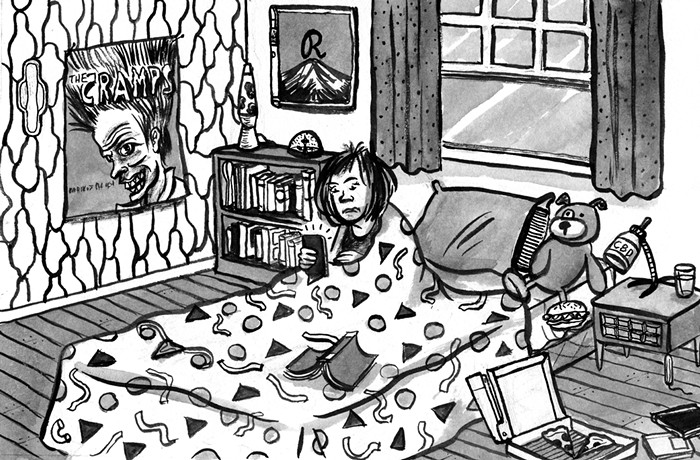 There are 11 hidden objects in this drawing. How many can you find? Aaron Bagley
Tweet

Ever since I was a teenager, I've had really bad, horrendously painful cramps. This year, a doctor told me I probably have endometriosis, which is a condition of the uterine lining that can only be diagnosed for sure through a surgery where they go in and actually check. I don't want to do that right now.

In some cases, a hysterectomy can end up being the recommendation. I don't want to do that right now, either.

Before I found out about pot suppositories, I'd tried everything for my horrible periods—Advil, Tylenol, ibuprofen. Nothing touched the pain. We're talking almost 26 years of these horrible cramps. So much pain that when I was young, I would miss school, and now that I'm an adult, it's hard for me to work on those days. There are literally people on disability because of this condition. It's crippling pain. Especially the first day or two of my period. And the worst, for me, is at night. I just don't sleep. I just lie there wanting to cry.

I was reading articles online one day, and they led me into the world of CBD oil, CBD bubble baths, and the thing that really gets people's attention, CBD suppositories.

I live in Montana. There's a dispensary near me, so I went over to see what they had. It turned out a woman owns the place and she was working that day—which was the greatest thing ever. Because most men don't even know that this is something that can help us.

I told her everything, and she was like, "I'll hook you up." She just knew.

The advice the woman at the dispensary gave me was to do all three things: a syringe of CBD oil tincture orally, the CBD bubble bath, and a CBD suppository.

But the suppository alone was a fucking miracle. I'm talking 26 years of pain, and now I put this thing in my butt, and that first day of my period is pretty good.

The suppository is a tiny, bullet-shaped thing, about the size of half a pinkie, kind of like something you might get for hemorrhoids. You keep them in the freezer, they're white, and inside is this CBD stuff. You can do them vaginally, but the woman at the dispensary recommended doing it anally. For some reason, that's thought to work better on those muscles—and for me, it has. Also, I don't like the idea as much of having it in my vagina. I don't know why. Maybe I'll try it next time.

Once the suppository is in, I was told I should lie down for 15 minutes, just to let my body relax. I have two kids, so that's always a nice thing anyway. And then all of a sudden—it's not like BOOM, but subtly—you just feel better. You feel relaxed in there. Those muscles that are causing me searing pain—like constant little contractions all day long—they just relax. Soon it feels kind of how it does when I don't have my period.

It's life changing. I really wish I'd known about this earlier. I will do this for the rest of my life, and I'm telling everyone I know. And I've learned in the endometriosis groups I've joined online that there are lots of women in a lot of pain like I am, and this is changing their lives, too. A lot of them talk about CBD suppositories and encourage other women to use them. It is changing women's lives.

Plus my mood is so much better. Because when you're in chronic pain, you are just crabby—you're angry about it.

And the alternative, for some people, is using strong pain medications, which can come with a lot of downsides. I had some hydrocodone left over from my cesarean section, and I tried that with my period. It just messed me up. It didn't work as effectively and I would feel high. With the CBD suppository, I don't feel different in my brain.

Using the suppositories, for me, has had zero side effects. No downsides. I don't even feel high, so I can keep on parenting and doing my normal things. For me, it feels like the edge just gets taken off. You have edges, and it smooths them. Whereas when I get high, it more than smooths them. I feel like I'm in a different plane, a little disoriented: I feel high.

With these, I feel more normal. I smoked weed for 10 years; this is a different thing. It's not like getting stoned. It's like true pain management without the side effects.

The ones I get last about four hours, and they cost around $50 for 10 of them. I use all of them over the course of my period, which is not the most cost-effective, but if you're in pain, you don't care.

The only other thing I would say is that people should go into using CBD suppositories with reasonable expectations, because it's not like a massive pain pill. It's just a relaxer. It just helps.

But it needs to be everywhere for all women and uterus-havers. It's a game changer.