What we know about the mayor and the art scholar. 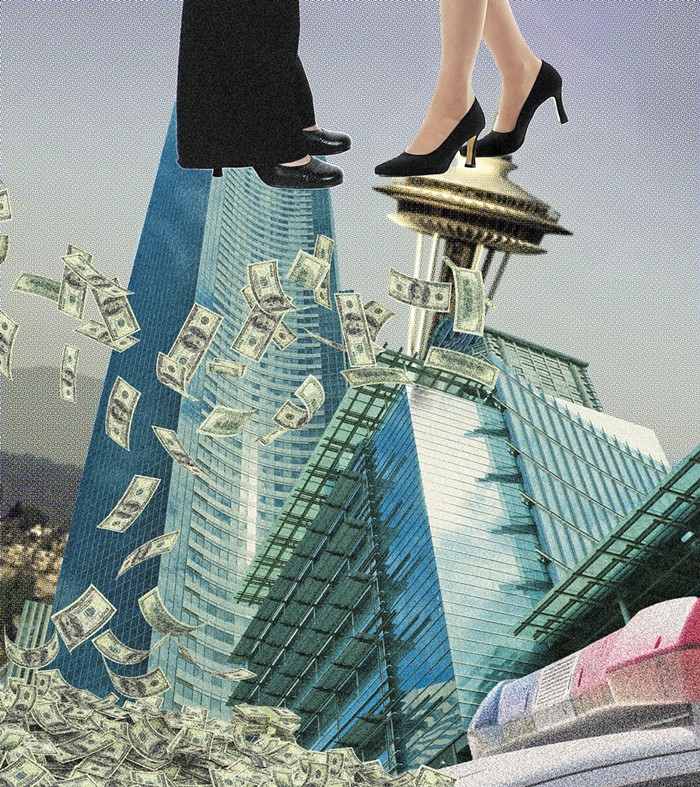 Mayor Jenny Durkan doesn't want to talk about her private life. Which is too bad, because it must be a hell of a story.

It's hard to imagine Durkan's success in politics could have happened 20 years ago. The general public, even the supposedly liberal Democratic Party, was openly hostile to LGBTQ people back then. Bill Clinton signed the Defense of Marriage Act in 1996, instituting homophobia into federal law.

After decades of strong, brave women blazing a trail and fighting for equal rights, we now live in a world where a lesbian can become the most powerful person in a major American city. The irony of the mayor not wanting to talk about that is that Durkan is herself one of those women who forced society to change, paving the way for future generations of women and LGBTQ people. So is Dana Garvey, Durkan's longtime partner, with whom the mayor has two children.

Even though the mayor's office declined to let The Stranger interview Durkan, we do know some information from public records and other press reports. Durkan is one of seven kids born to a powerful Seattle-area political family. She got her law degree at University of Washington in 1985. She rose through the ranks of the legal profession, starting as a public defender and eventually becoming the first openly gay US Attorney in history. She later worked as a private corporate attorney, with clients like Coca-Cola and FIFA, in a role that she has said would have paid her nearly $2 million a year if she hadn't become mayor.

While Durkan worked in the public sector, Garvey broke barriers in the world of high-stakes corporate business. Garvey was a senior executive at McCaw Cellular/AT&T, one of the country's largest cellular communication firms during a period of momentous change in the wireless industry. She later launched her own start-up, D. Garvey Corp, that employed more than 255 people in the "development and construction of large-sale wireless networks," according to a biography published on the website of her latest venture, IconAlytics, Ltd. Garvey started IconAlytics, a company that authenticates art, after getting her PhD in art history from the University of Washington.

They are easily one of Seattle's most powerful couples, if not the most powerful couple in the Pacific Northwest. It's a story worthy of a book, although they're not likely to publish it anytime soon. Durkan has described Garvey as "unbelievably private" (according to the Seattle Times). In addition to declining an in-person interview request from The Stranger, the mayor's office declined to answer written questions for this story—from serious inquiries about financial disclosure to softball questions like how they met and what they think of being leaders in the LGBTQ community.

Even though we are referring to Garvey as Durkan's "partner," they are not registered domestic partners and they are not married. Because of this, Durkan is able to shield Garvey from much of the public disclosures that the spouses of previous Seattle mayors have been subjected to.

Seattle mayors, like all city employees, are required to file financial disclosure forms that clearly describe what they own and their business relationships. That disclosure requirement extends to the spouses of politicians because Washington is a "community property" state, where your assets are shared with your legal partners, according to Wayne Barnett, executive director of the Seattle Ethics and Elections Commission. These disclosures are intended to prevent public officials from making decisions that directly benefit their own finances. We wouldn't want an official awarding contracts to their own business, and disclosing their assets publicly helps prevent such moves.

"It's about making sure that everyone can be on guard for self-dealing," Barnett said. "We would not want a mayor or a city councilmember or even a city employee taking actions that would benefit themselves."

These laws apply to Durkan, who filed a financial disclosure statement in which she said she was worth $5.75 million (including a checking account with more than a million dollars in it and stock in Costco and a company called Nanometrics). But what Garvey is worth (and what she invests in) is anyone's guess.

By all indications, Garvey is worth a lot of money. Not only has she worked in high-paying corporate jobs, and not only does she own her own companies, but she very likely started her life with some change in the bank. Her father was a Louisiana telecom magnate who sold his wireless telecommunications firm for $400 million, according to an obituary published in the Times-Picayune in New Orleans.

Garvey also purchased a 70-acre lot on Whidbey Island for $3.4 million in 2001, what was then the island's most expensive residential property purchase, according to the South Whidbey Record. David Kroman, a Crosscut reporter, uncovered details about a new house the couple is building in Garvey's name; they reportedly purchased the $4 million house in 2015 at an undisclosed location in Seattle, demolished it, and then set out to build a 5,000-square-foot mansion worth $7.5 million in its place. Crosscut didn't publish the address, noting that Durkan has received death threats from her work as a US Attorney. The Stranger will not publish it, either.

But it makes you wonder: What do they not want the public to know? Are they hiding anything from us? These are valid questions to ask any political leader. Similar questions have dogged President Donald Trump since his decision, during the 2016 campaign, not to release his tax returns.

More questions come to mind: How many companies does Garvey own or have a stake in? What stocks are in her investment portfolio? Considering her wealth and her PhD in art history, what paintings does she own? Will a Georgia O'Keeffe or a Jean-Michel Basquiat hang in their new house?

Because Durkan hasn't voluntarily disclosed Garvey's assets, and because her office declined to provide any information for this story, we have no way to know. I should reiterate: Durkan has not broken any laws by being private about her family's finances. (Neither has Trump by not disclosing his tax returns.)

"The ethics laws on the books do bar the mayor from taking any action in which her partner has a financial interest," Barnett said. "There is no reason to think that she is not complying with those laws."

Nevertheless, she is going against the precedent set by our last two mayors. Mayor Ed Murray's husband, who was also a city employee, would frequently speak to news outlets and be photographed for stories. By contrast, few public photos of Garvey exist anywhere.

The mayor before Murray, Mike McGinn, was so transparent with the media and the public that he made not only his wife but also his children available to reporters by inviting the staff of The Stranger to his house for long, poorly lit barbecues in his North Seattle backyard.

Meanwhile, our current mayor and her partner are harder to find than a sunny February day in Seattle. That's a shame, because they probably have an inspiring story to tell.