How to Make Friends in Seattle

This city has the social skills of a sheet of black ice. But I recently had a breakthrough. 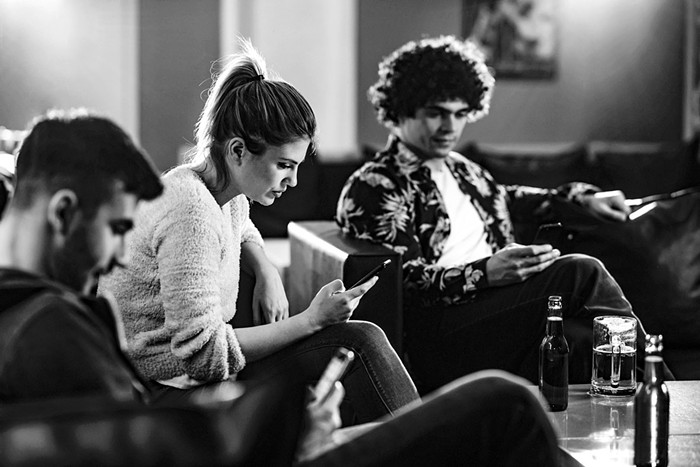 It’s difficult to strike up a conversation with people who are doing this (which everyone in Seattle is at all times). skynesher/Getty Images
Tweet

People say Seattle is an unfriendly city, but that's not quite true: It's actually a cold, gloomy, cliquish, cultish, and unfriendly city. As you will soon find out, it's also not an easy place to make friends. This is especially true if you don't believe in astrology, which wide swaths of Seattle are as devoted to as nuns are to God.

I learned this the hard way, and more than once. When I first moved here five years ago (it feels more like 50), I went out with a potential new friend who immediately asked for my astrological sign. "Wait!" she said. "Let me guess." She got it right on the twelfth try. Right around then, I remembered that I had a late-night dentist appointment and left. And that was one of my more successful friend dates.

I never had trouble meeting people before Seattle. At first, I did the thing you are supposed to do to meet people: I joined a running club. Just kidding! Why would anyone do that? I actually went to bars and tried talking to people. This technique had been successful in other cities—but in Seattle, I found that most people were less interested in strangers than in their iPhones.

When I would finally manage to engage someone in conversation, it would go in one of two directions: Either I'd end up listening to a diatribe against Amazon or I'd end up listening to someone who works there talk about "stand-ups" and "scrums," whatever the hell those are. Either way, it was stultifying. After months of trying, I basically gave up. You'll find your people eventually, I told myself. Don't push it.

Luckily, there's plenty to do unaccompanied in Seattle. There are free talks and readings at Elliott Bay Book Company more nights than not, and the $5 events at Town Hall bring in speakers you hear on NPR and see on CNN for less than the cost of a drink. I saw David Duchovny one day and the countywide spelling bee the next. Sure, maybe I looked out of place at the spelling bee—a solo adult with no child in sight—but so what? No one knew me. Plus, it was cute.

Unfortunately, humans are social animals, and without community, loneliness can become a constant unwelcome companion, like a dog you don't really like. According to the AARP, one in three adults in the United States suffers from chronic loneliness. I'm not in that age group quite yet, so I guess I'm ahead of my class, but in this case, that's not really a good thing: Lonely adults are 25 percent more likely to die prematurely than the non-lonely.

I don't want to die, at least not until I see Donald Trump rotting in solitary confinement. But how to make a friend? They say the best way to meet people is through hobbies. Unfortunately, I have none besides smoking weed.

I do however have the internet, and when it comes to finding friends, there's an app for that—although it is not Adult Friend Finder, as I recently found out. But there are other options, like Bumble BFF (for women), Peanut (for moms), Meet My Dog (obvious), and Nextdoor (the hyper-local listserv that lets you know which of your neighbors are racist). There's also work, although why anyone would hang out with coworkers after listening to them hum and sigh and breathe for eight hours a day is, frankly, beyond me. (If one of you is reading this, I swear, it's a joke!)

There's also Craigslist. It may sound unwise to seek out friends on a website that has a murderer named after it, but people tell me it works, so I decided to go for it. When it comes to writing classified ads, it's best to get right to the point, so my headline read: "Like Weed? Hate Astrology? Let's Be Friends!" I then listed my age, location (Capitol Hill and unwilling to travel), and interests (public radio, natural disasters, and cults). It seemed prudent to add an image of myself so my future best friends would know this wasn't a scam, but it seemed less prudent to post my face on Craigslist. I put on the pigeon-head mask I keep in my desk and snapped a pic.

In retrospect, the pigeon thing might explain why I got several responses from birders. The most promising reply came from a retiree based in Bellevue, but while I'm willing to travel across the water for some things (Indian food), friendship just isn't one of them.

As for the apps, I didn't having any luck there, either. The only messages I got were from men who wrote simply, "Hey." I took that as code for "Wanna fuck?" and never replied.

Eventually, I succumbed to the realization that the social stage of my life was over. I might never again have a friend, besides my girlfriend. Then I went to an evening of performances at The Factory on a Thursday night. A man in his 30s was reading an essay about wetting the bed until he was 18, and a wild laugh kept punctuating his reading. It belonged to a woman with short hair, a writer whose work I'd read and admired. We met briefly that night, and saw each other at different parties and literary events around the city over the next few months.

Soon we were referring to each other as friends, and she introduced me to another writer whose work I'd admired, and I became friends with her, too. Now the three of us get together for long dinners and freewheeling conversation on the houseboat where one of them has lived for more than 30 years. Neither of them has ever asked me for my sign.

Instead of astrology, we talk about the state of the world and how it's going to shit. They talk about the good old days of publishing, and I wish I could get a time machine and go back to then. They've got no problem with nuance and perspective, and they see (unlike so many people my own age) that the world is more gray than it is black and white. I leave their company just a little bit fuller each time.

This is exactly the kind of friendship I've been longing for, and I finally found it, in a couple of women twice my age. They're the same age as my parents, but unlike my parents, I can say "fuck" in front of them without feeling weird.

When it comes to making friends in Seattle, you need to be patient, you need to leave the house, and—most important—you need to expand the age range in which you look. If there is hope for unrepentant grumps and skeptics like me, there's hope for literally anyone.