What Are Axolotls and Why Am I Suddenly Obsessed?

This Mexican salamander didn't win our Ugly Pet Contest, but he won my heart. 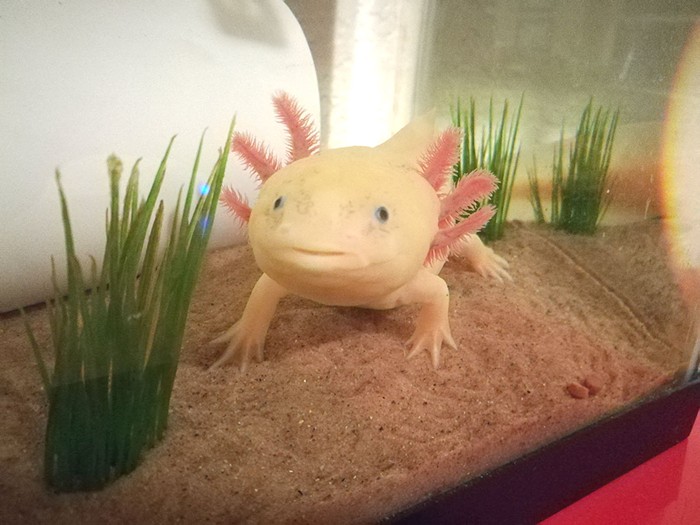 I was looking through the submissions to our Ugly Pet Contest when I came across a creature straight out of science fiction—not entirely unfamiliar but at the same time utterly foreign. It looked like a fish with arms and legs, each limb ending in daintily webbed digits. Its tiny, lidless black eyes weren't beady but soulful, its face framed by three pairs of feathery, dark-pink sprigs that looked like live coral.

"I'd like to introduce you to Phil!" the e-mail said. "Like any axolotl, he has an insatiable appetite for bloodworms. He spends much of his time staring unblinkingly into the distance, but who knows what he's thinking about?"

I was smitten. Hey little guy, I thought. You are definitely too adorable for this contest. Curiosity piqued, I jumped online and fell into an axolotl click hole.

Axolotls (pronounced axo-LO-tuhls) are sometimes called walking fish. They aren't fish, however. They're salamanders from Mexico that reach sexual maturity without metamorphosing into an air-breathing form. They remain in their "juvenile" stage their entire lives, possessing both legs and a tail while remaining aquatic and gilled (those feathery sprigs are external gill stalks called rami) rather than developing lungs and taking to the land.

According to legend, the first axolotl was the Aztec god of death and lightning, Xolotl, who escaped sacrifice by changing form. Later, the Aztecs took to eating them. These days, axolotls are all but extinct in the wild. Their native habitats are either gone or, as in the waterways and canals in Mexico City, highly polluted and filled with predatory non-native fish that eat both axolotls and their primary food source.

Axolotls have flourished in captivity, however, bred successfully over more than a century, raised legally as exotic pets, featured in zoos and as "living exhibits" (there's a trio of them at Pacific Science Center), or used as lab specimens by scientists investigating their extraordinary ability to regenerate limbs. An axolotl can even regrow its heart and brain.

Argentinean short-story master Julio Cortázar wrote one of the most affecting pieces I found about axolotls, an existential musing in which the narrator discovers the creatures, becomes obsessed with the thoughts running behind those deep, fathomless eyes ("The axolotls were like witnesses of something, and at times like horrible judges"), and eventually turns into an axolotl himself—or perhaps he was one all along.

Finally, I called the guy who'd submitted Phil the axolotl to our contest; I wanted to gain some firsthand knowledge about having an axolotl as a pet. Kevin Tsuchida, Phil's owner, described an obsession not unlike my own, except his turned tangible four or five years ago, when a friend introduced him to someone who had some axolotl babies to unload. He met her at University Village with $20, and she gave him a plastic container with the tiny amphibian.

Currently, Phil is about six or seven inches long, and according to Kevin, he's a good listener, a good companion, and a low-maintenance, seemingly boring pet. "But if you catch a passing glance at him as you're walking by, sometimes he'll rise up to the surface and swallow up some air, and then just float around in the middle of the tank, or he'll do laps," Kevin said. "You have to catch him in these infrequent moments, because for the most part, he really is just staring at nothing."

But maybe he's pondering his existence, or dreaming of life outside the tank. Or maybe he's actually dreaming.