The Pet Portrait Industry Is Booming 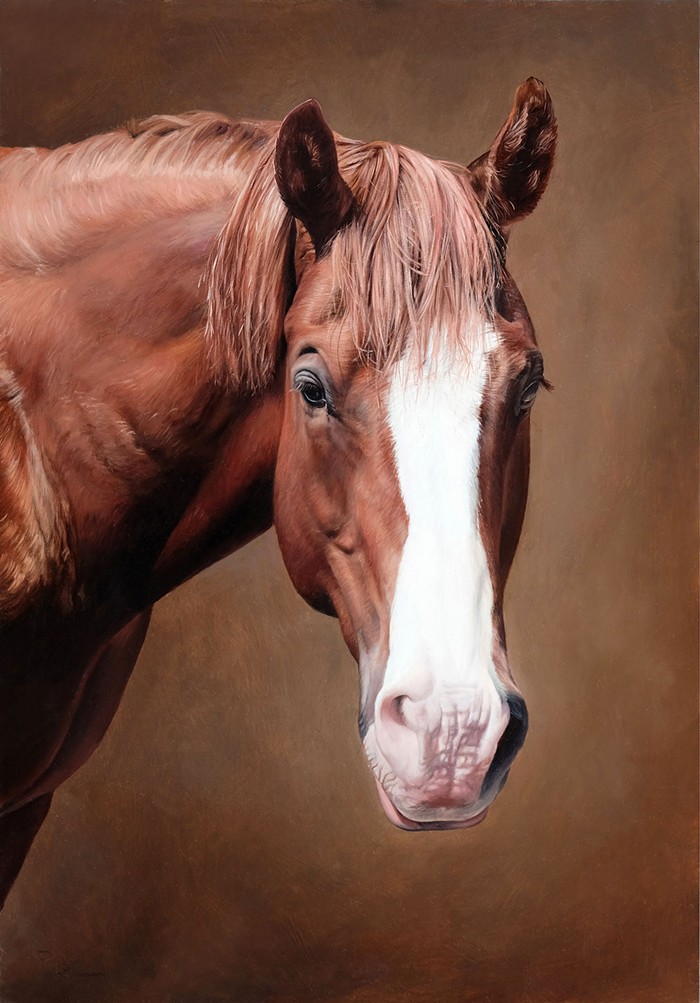 The pet portrait industry is thriving in Seattle—and for good reason. There are more dogs than children in this city: around 153,000 dogs to 107,178 kids, according to Seattle magazine (which got its numbers from the US Census and Seattle Animal Shelter). That's not even counting cats. Or chickens. Or those goats at that one house in Wedgwood.

What better way to commemorate your pet than to commission a formal portrait? Seattle-based artist Kaitlin Robinson at Kait's Calling (kaitscalling.com) has been working in the field for the past 15 years. She believes the rise of social media coupled with Seattle's childless population boom fueled the craze for pet portraits. "People love their pets and want to spend money [on them]," she said in an interview.

Robinson moved here in 2004 to go to the (now defunct) Seattle Art Institute, and she picked up a part-time job at a pet store. While taking a class on chalk drawing, she created a portrait of her manager's black Labrador as a birthday gift. "It kind of just snowballed," Robinson said. "I gave it to him, and it was a huge hit. And then all my coworkers wanted one. Then customers saw it at the pet store and they wanted one."

Balancing work as a freelance artist in the cannabis industry, Robinson paints pet portraits for people all over the world. She tells customers to send as many photos as possible, and she asks questions to get the personality right before rendering a portrait in pastel, acrylic, or pencil. The results are soft and meditative, quietly humming with life and personality.

"It's not just this whole sad thing like, 'Let's memorialize this animal with our family in our house before they die,'" pet photographer Renata Steiner told me over coffee recently. "It's mostly people who love the crap out of their dog like I do, and they treasure spending time at home with it."

Steiner has been running Doghouse Portraits (doghouseportraits.com) for the last year and a half. She goes to people's homes to take intimate photos of their dogs (her specialty) in their "natural" environment. Her photos are playful and candid. There's nothing posed or unnatural in her work. She captures the dogs as you might find them in real life, often including owners in the frame as well.

"I want you to look back and be like, 'Aw, we used to cuddle on that ratty old couch all the time' or 'He always sat by the back door and the sun hit him in the afternoon,' because you remember these things. I want you to remember it visually," she said. "I don't want it to be this disconnect."

On the other hand, photographer Emily Rieman of Best Friend Photography (bestfriendphoto.com) specializes in that studio look. Rieman shot the gorgeous photo of Sharky for The Stranger's Pet Issue cover in 2018. Born and raised in Seattle, Rieman started doing pet portraits in 1997 after a friend encouraged her. She had studied photography but was attending beauty school. Rieman left promo cards around town and, to her surprise, received lots of commissions. Business has been pretty consistent ever since.

Like Steiner, Rieman also goes into people's homes, bringing a black backdrop with her, which gives her flexibility and grants the final results a formal quality. "I want the animal to look dignified," she told me when we met up recently. She brought a giant suitcase full of photo prints of her work, pulling them out to show me. "Even if they are funny, I want them to look dignified."

Rieman does a mix of color and black-and-white photography, dealing mostly in cats and dogs, but looking through her work, you might find a chicken or a goat. Though formal, there's nothing rigid about her photos. If anything, the black backdrop lets the viewer focus on the tiny details of what makes each animal special. Rieman's relationship with her own pets deeply informs how she approaches other people's. "It's my pets that made me realize they're individual animals that are very important. They're not just any dog—they're this dog," she said. "He's got a name and a family and a past and a present and he's an individual." She added, "Cats too."

This idea of individuality, of deep affection, of companionship is the thread that runs through all of these artists' works. As someone who has never owned a pet (my parents told me if I wanted a pet, I could just play with my younger siblings), the relationship between pets and humans was a connection I didn't quite understand until talking with Seattle painter Rebecca Luncan.

Luncan grew up around animals and understands that bond. "We go into it with a completely open heart. And your animal does, too. They love you just as much as you love them back," she told me. "But you go into this relationship and it's kind of a guaranteed loss because they live such a short time."

Luncan's work, paradoxically, lasts forever. She comes from an academic background and is classically trained in traditional materials and techniques, everything from painting frescoes to grinding her own pigments. Working part-time at Seattle Art Museum, she spends the rest of her time painting both for her own art career and commissions for others (her website is rebeccaluncan.com). Luncan is booked solid through March of next year for pet portraits alone.

Luncan's portraits are insanely detailed: realistic but also aspirational. She takes inspiration from the Northern Renaissance and the Dutch Golden Age of painting. My favorites of hers are the miniatures—which she refers to as "jewel-like"—that fit in the palm of your hand.

It's a funny idea that even in 2019, this medium of representation, of memory, of love is something that people still seek out. That with our smartphones and our ability to capture every aspect of our lives, people still go out of their way to commission portraits of their animal friends.

"There's an immortality to a portrait painting," Luncan told me. "Even though they live such a short time, their portraits will last for hundreds and hundreds of years—it's a great tribute."