Meet the Winners of The Stranger's 2019 Ugly Pet Contest 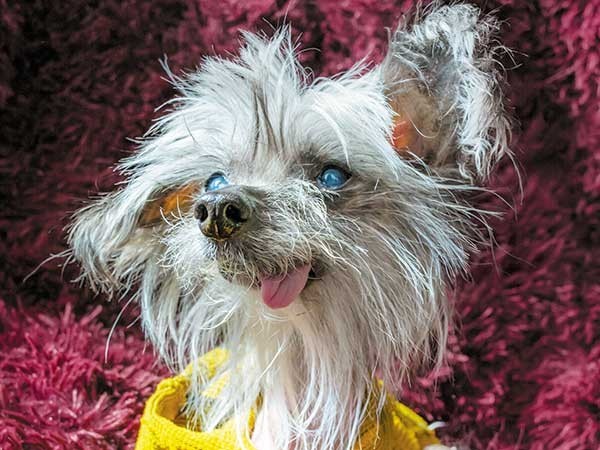 Rabies, with his snarly teeth and prominent underbite, "was a big dog in a little body," according to his mom. Rabies quickly won over the staff of The Stranger, who voted him into the top three of the 2019 Ugly Pet Contest by secret, all-staff ballot. Unfortunately, Rabies passed away the day before The Stranger was going to photograph him.

"The love that poured out to me over his recent passing touched my heart in ways I can't explain," Rabies's mom said. "It also showed that people really do care in this world, where often only the negativity reaches our eyes and ears." Asked to share other details about Rabies, she said: "I want to also include that Rabies was a horse-poo connoisseur. Living with horses, he loved to help me with farm chores. Oftentimes, he would get horse poo in his teeth. This did limit mouth kisses." Our thoughts go out to everyone who knew and loved Rabies. His underbite will live on in our hearts forever.

Seeing the one-eyed cat Captain for the first time "was love at first sight," Captain's mom told us. It was at an adoption event put on by Friends of the Animals Foundation at Mud Bay on Queen Anne. Captain looked "pretty sad and disheveled," but Captain's mom had had "a childhood dog that was blind that had passed just a couple years before, so getting an older blind cat felt right."

He's "the warmest and most affectionate cat around," she added. "One of our friends is convinced he is a luck dragon." In the photo of Captain sent in to the contest, he had one eye, but when we went to photograph him, he had none. What happened? "He was blind from the beginning, and we knew from early on that he would have his remaining eye removed when it became too painful. We took the picture of Captain that we submitted to The Stranger a few days before his enucleation. It's healing beautifully!" Well done, Captain!

BB Gunn is the offspring of two show dogs from Florida. Her human mom, Sara, is a buyer for Dockside Cannabis. Her human dad, Nick, is a DJ. Sara has had BB for almost 18 years. "BB's aesthetic is punk-rock chic with some Goodwill baby clothes thrown in for good measure," Sara said.

What's an average day for BB? "BB's day starts off with baby food, vitamins, and sunshine when we have it. Then it's straight back to sleep till around noon when she gets her exercise by walking with dad or playing chase at home. She likes to sleep some more and wakes up for mom's arrival from work. BB loves to help make dinner. After dinner, BB loves cuddle time with mom on the couch and late-night snacks before bed."

Asked how many teeth BB has, Sara said, "BB has three teeth. One being her front snaggletooth." Asked what the greatest lesson they've learned from BB is, Sara said, "Looks aren't everything." Nick said, "The confidence to walk BB while wearing matching tracksuits." Asked if they wanted to add anything else, Sara said, "Follow her on Instagram @bbgunn6 #bbgunn #nudeandrude."

Thank You to Our Fantastic Sponsors!

The Stranger's 2019 Ugly Pet Contest is presented by Jet City Animal Clinic, and sponsored in part by Urban Animal.