Going Hiking in the Mountains? You Don't Need to Take Your Car

The Trailhead Direct service is now bigger and more connected than ever. 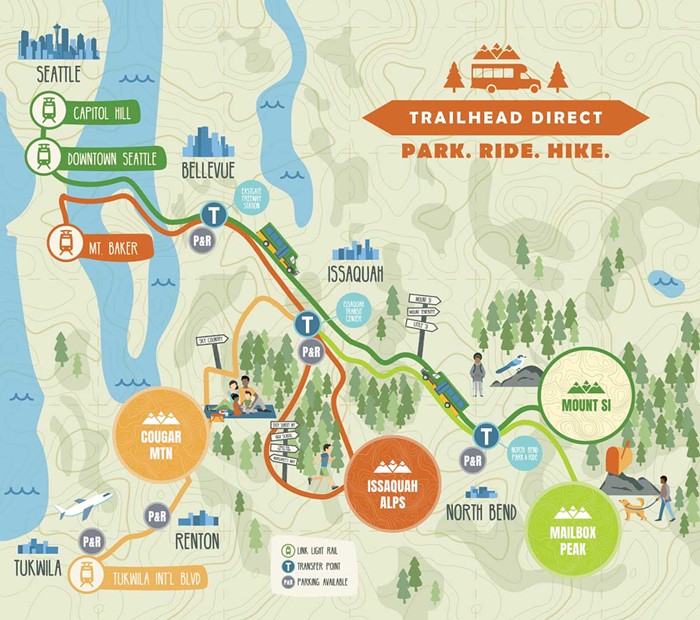 If you haven't been enjoying the mountain wilderness lately, you might not know that parking at the more popular hikes off Interstate 90 has become a nightmare.

Two weeks ago, as I pulled into the Mailbox Peak parking lot at 9 a.m., two county employees stopped me. They said the lot for the trailhead had been full since 7:30 a.m. If I wanted somewhere safe to park, I'd need to drive back to North Bend and catch a shuttle to the trailhead. Like an idiot, I ignored the recommendation, parked a mile away, and walked down a dangerous mountain road back to the trailhead, complaining that I'd never seen the Mailbox parking lot so full, especially not this early in the season.

This is exactly the kind of situation King County Metro and King County Parks were trying to avoid when they introduced the Trailhead Direct program in 2017.

The pilot program ran a shuttle only between the Issaquah Transit Center and Squak and Tiger Mountains. But thanks to increased ridership, a public-private partnership with outdoor companies, and some money from Seattle, the county expanded the program in 2018, and again in 2019. Now we have new routes! More mountains! And more transfer opportunities, baby!

The first time I hopped aboard the Trailhead Direct bus, everything that could go wrong did go wrong, and yet everything still turned out okay. The bus driver picked me up from the Mount Baker light rail station en route to the Poo Poo Point trailhead 10 minutes late. He was new and clearly unfamiliar with the route, but it took only 45 minutes from the point of departure to arrive at the trailhead's broad green field, which serves as a landing pad for paragliders.

On the last leg of the brief but meaningful hike, I saw the Trailhead Direct shuttle pulling out of the parking lot. Damn. I'd have to wait 30 minutes until the next shuttle rolled by. No matter. I snacked a little and scanned the skies for paragliders. I'd never actually seen one land in the fields before. Thirty minutes passed by quickly, but still there was no sign of the bus. What was happening?

Shit was happening. Literally. A semi-truck packed with fertilizer made from human waste crashed on I-90, blocking the entire highway. The bus I was waiting for had been caught up in the traffic and ended up being an hour late.

But even after all that, I still got home by 2 p.m. That was plenty of time to enjoy a Saturday in the city after spending a good clean morning in nature. And I could hardly blame the traffic on the bus. There's no escaping it. Unless a pile of human filth spills all over the highway, chances are you'll get to the mountains from the city in less than an hour.

All of them are conveniently located off I-90.

You All Saved the Lake Serene Trail!