Meet Bobby Higley, an Ex-Mormon Who's Become One of Seattle's Best and Dirtiest Comics

"I describe myself as Seattle's premier sad, gay, ex-Mormon comic." 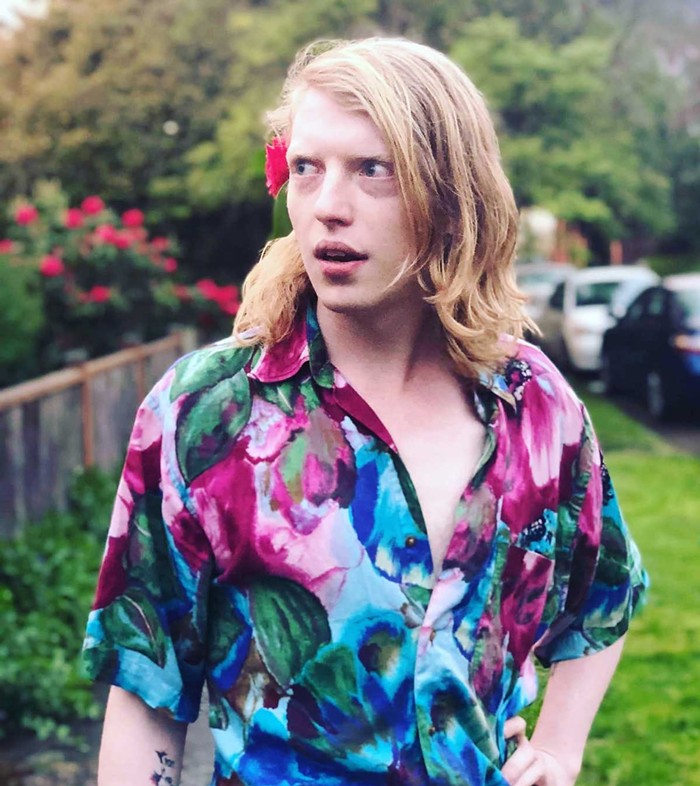 Growing up in a Mormon family in Utah and Idaho, thin white androgyne Bobby Higley must have stuck out like '70s-era David Bowie at a hardcore-punk gig. She has turned the pain of being bullied in school and misunderstood at home into one of the raunchiest and funniest acts on Seattle's comedy stages.

Higley, who is nonbinary and uses she/her and he/him interchangeably, moved to Seattle from Idaho at 18, after a "difficult, complicated" upbringing filled with intolerance and bullying. The family situation has improved, though, and Higley's younger sister is her most ardent fan. One of Higley's most memorable jokes revolves around her grandfather telling Higley that she was dead to him after she came out.

Unsurprisingly, all this led to depression, which resulted in Higley developing a viciously defensive posture. "I was smart enough to say that thing that was just hurtful enough to really hurt you," Higley says. "And so people left me alone. When I came out, my demeanor changed. I didn't feel the need to be so mean or sad anymore. But I had already kind of burned all of my bridges."

Now almost 26, the self-described "gutter twink" has been engaged in Seattle's comedy scene since 2015. She runs the all-ages Sacrificial Tofu nights at Americana (where she bartends), the Fuck Yeah Bingo events at Highline, and the Safeword monthly at Kremwerk with Claire Webber. And she makes regular spectacular appearances at Jai Thai's Comedy on Broadway open mics. She has a busy Pride Month, too, culminating in Five Senses Reeling's Stand Up for Pride show on Thursday, June 27, at SIFF Cinema Egyptian.

"I describe myself as Seattle's premier sad, gay, ex-Mormon comic," Higley says. "I have a couple of really cutesy jokes that are actually police-brutality jokes at the end. And you don't realize until we get there. Then once you do, you're like, 'Oh, god.' I've always described my approach as 'razzle- dazzle gut punch.'"

Elaborating on her dark subject matter, Higley says, "The rule of threes is important in comedy, so that last part is where I'm grinning from ear to ear as I say something so fucked up, because you trusted me on step one and step two."

It's a delicate tightrope walk, these abuse jokes, and Higley masters them with panache—and feels empowered while doing so. "For a long time, I thought I would never talk about any of that onstage. It was something that I would tell my partners six months into dating them, in hushed whispers, crying in the middle of the night."

Turning anxiety, depression, and PTSD into comedy gold has been Higley's coping mechanism, and few in town are better at it. Beyond those traumas, though, Higley also converted suicidal thoughts after having $120,000 worth of Magic: The Gathering cards stolen into a cathartic routine that took the sting out of losing that obsession.

Higley recalls another pivotal moment: "I recently told this bit onstage that I never thought I'd talk about, which was how I have a hemorrhoid tag, which is a scar you can get on your butthole. I was doing a stripping show, and I thought, 'Oh god, I'm super-insecure about this.' But then I was like, 'That's the whole point.' So I ended up showing an audience of 120 people my asshole to "Ave Maria" at this beautiful place called Comic Strip in Portland, while the host came out and said, 'Shame, shame.' But, yeah, comedy is how I cliff-jump off of things that are too hard for me to do emotionally."

All of this is very well, but does Higley have any Trump jokes in her repertoire? Um, no. Seriously, how do you outdo a figure whose every utterance and action are a tragicomic farce of world-historical proportions?

But don't mistake Higley's lack of political material for apathy. She has too much at stake to not care, but the subject just doesn't inspire her.

Higley notes that fellow Seattle comic Derek Sheen contextualized it better than most when he said, "It's impossible to write a current Trump joke, because every day he does something else that is fucking inane or stupid. And then everybody else is like, 'Oh yeah, that was relevant yesterday, but now there's this new current event.'"

Higley also points out that late-night shows with teams of writers focus on current events and Trump every day, as well as citing Wanda Sykes's new Trump-centric Netflix special, Not Normal.

"Those things are out there, and so, for a younger comedian, there's almost no motivation for me financially or as far as my craft goes to write a Trump joke," Higley says. "Because in order to keep it current, I would have to make adjustments, and then at the same time a famous comedian could write that same joke in parallel thinking, and you can't argue which came first. It doesn't matter which came first—they have it on fucking Netflix. So it's very hard to write Trump jokes, because oftentimes it's already been written, and it was written better than you and faster, and it was nationally televised."

And besides, Higley argues, most Trump jokes aren't that funny. "I find it so frustrating that so many people focus on his appearance. Like, yeah, you don't want to fuck him. That's awesome. It doesn't matter. That's not why he's a bad president. He's a bad president, partially, because he's very insecure. And I think that he reads these comments, he sees these horrible memes of himself, and then he's like: 'You know what? Fuck California. We're going to start drilling in national parks there.' He seems so petty and so small that I don't understand why so many of the intellectuals are poking fun at his body. Hitler probably had very similar motivations, like too much physical rejection, you know? And then it just went off the fucking wall."

So don't expect to see Higley aspiring to ghostwrite Trevor Noah's quips on The Daily Show. However, she does have goals to make Safeword a nationally touring show and bring it to festivals with Webber, whom she calls a "genius."

Higley also wants to get into voice acting, regular acting, and television writing. But first she's doing a tour of Southern states this summer, including a stop in South Carolina, where her ex, who was 18 years older, lives. Higley's billing it as the Spite Tour, because this ex, who got her "into everything crazy that I've ever done," had asked her, "Do you want to be a 40-year-old waiter?"

The dismissive remark "cracked" Higley's heart and spurred her to plunge into comedy. The ex's favorite comic, Jenn Snyder, is opening, so he'll likely be there. Bet on Higley literally having the last laugh.

Stand Up for Pride

Stand Up for Pride

The El-Salomons Mine the Humor in Their Unconventional Relationship

The Comedian Who Shreds Gender Stereotypes