The Older Generation to Young Gay Men: "Why the Fuck Are You Complaining?"

Yes, Trump sucks. But at least all your friends aren't dying. 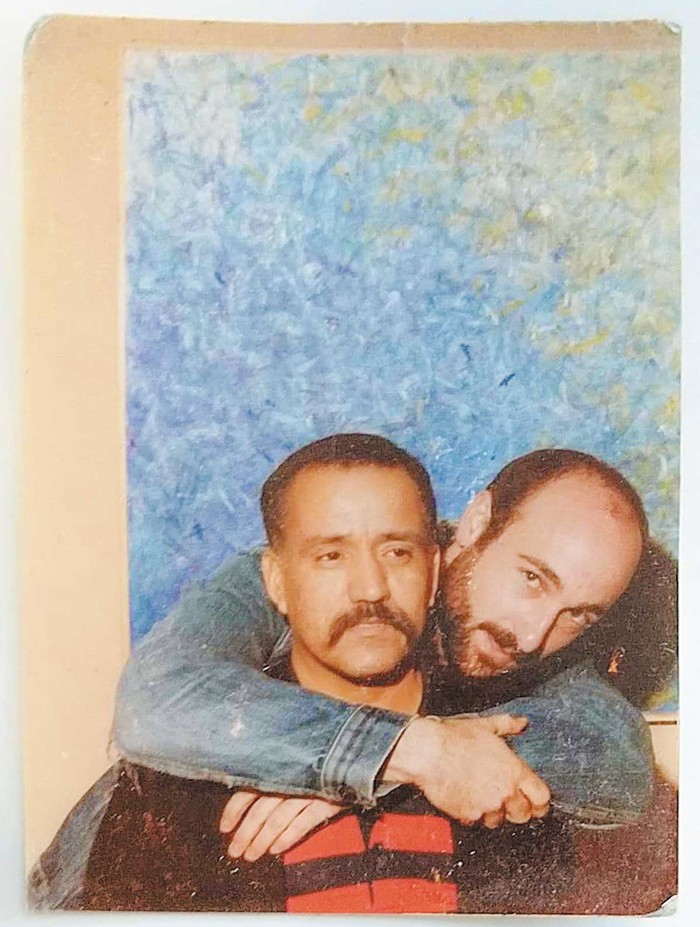 Jeffrey (in denim) and Amador, in front of one of Jeffrey's paintings from college. "It was taken a year or so before he died," Jeffrey remembers. "It is a small photo I carried in my wallet for decades after his death. It got a little ragged." Courtesy of Jeffrey Robert

Jeffrey Robert gets why queer people are pissed off. He's pissed off, too. Despite promising on the campaign trail to support the LGBTQ community, Donald Trump quickly proved, once again, that campaign slogans are nothing but empty.

This didn't exactly come as a shock: Trump may be a gold-plated libertine in his own life, but his Electoral College victory was delivered in no small part by the religious right, and so, once in power, he started pandering to his base. From the trans military ban to rolling back Obama-era protection for LGBTQ people in the workplace to nominating Supreme Court justices with a history of hostility to gay rights, he hasn't been good for gay people—unless, of course, those gay people happen to be in the very top tax bracket.

And yet, even with all this—all the bigoted rhetoric coming out of the White House, all the lies and misinformation and shrieks of "FAKE NEWS" and "LOCK HER UP"—for gay people of a certain age, life, even under Trump, has never been better, because life before was so very much worse.

Jeffrey, a Seattle-based humorist, artist, and storyteller who has performed across the country, came out for the first time at age 14. It was Sacramento, 1973, and he and his best friend confessed to each other that they both liked boys. They didn't tell anyone else, and how could they? Stonewall had happened less than five years before, and the gay liberation movement was still nascent. PFLAG had just been founded, and gay-straight alliances were still years away. He and his friend swore not to tell anyone else.

His secret didn't last long. Three years later, Jeffrey came out to everyone else. The reaction was mixed. "I had some friends who were supportive," he told me. "My mother cried. My father said something angry. It was not comfortable, not comfortable at all."

Over time, however, his parents came to terms with who their son was, in no small part because they easily connected with his first partner, a charming schoolteacher from Laredo, Texas, named Amador. "They just loved Amador," Jeffrey says. "That really helped."

Jeffrey and Amador met at a gay bar. Jeffrey was underage and Amador was older, but at the time this was nothing to be scandalized about. It was common for older and younger men to get together. Normal. "That's just the way it was," Jeffrey said. "I moved in with him from my parents' house, and we had a very nice life together." He describes Amador as funny and silly and campy, he says Amador was very fond of telling a story about going to Europe and picking up all the men in Rome. "He really loved hamburgers and steak and blond boys," Jeffrey says.

The couple were together for almost a decade. Their relationship was open: "Everyone's was. It wasn't even a discussion." But in many ways, they had a traditional relationship. They would go to Jeffrey's parents' house every weekend to play Scrabble or Trivial Pursuit, and they assumed that they'd have many decades to get old and boring together.

Then people started getting sick. "It felt like the children's story "Pinocchio," when the boys go to the land where everything is fun and amazing, but if you stay there too long you turn into a donkey," Jeffrey says. "It felt like it was kind of that thing, where you are in this magical land, and all of a sudden this evil creeps in."

The evil, of course, was AIDS.

AIDS first arrived in the United States in the 1960s and '70s, but it wasn't definitively identified as a sexually transmitted infection until well into the 1980s. When the epidemic first emerged, people thought it was a kind of gay cancer or was connected to poppers, a recreational drug common in the gay male community. "Nobody knew what was happening," Jeffrey says. "There was this weird thing spreading through the gay community. People were getting very sick, and they couldn't identify why. It was terrifying, like a monster movie. We didn't even know what it was called, much less what caused it. We just had no idea."

Jeffrey doesn't know how many of his friends and acquaintances died from AIDS in those years. "It wasn't just friends," he says. "It was enemies. It was people I knew from bars. It was people I would pass on the street. There was a San Francisco paper called the Bay Area Reporter, and the obituaries started at like half a page, then it became a page, and then it was two pages, and then it was page after page after page. I'd go through there and I'd recognize so many people."

During the 1980s, tens of thousands of people, most of them gay men, died of AIDS in the United States. Including Amador, who died at 12:30 in the morning on May 6, 1987. "Cinco de Mayo had been a very big day for him," Jeffrey says. "At one point, he was the head of the Association of Mexican American Educators, and he was very connected in that world. We liked to say that he stuck around for one more Cinco de Mayo."

After Amador's death, his family erased Jeffrey from his obituary and then fought Jeffrey in court over his estate. They tried to convince a judge that the men hadn't been partners and that Jeffrey was a straight man just going after Amador's money. It worked. The family got the house and the cars and everything Jeffrey and Amador had owned together. "It was so fucked up," Jeffrey says, shaking his head. "So fucked up."

Not long after Amador died, Jeffrey moved to Seattle. Once here, he made new friends—some of whom later died of AIDS as well—and later met a new man, Rodney, through the classified ads in this very paper. "Rodney had just gotten into town, and he picked up a Stranger at Pagliacci Pizza on the Ave. He circled a couple of ads, including mine. He circled another one that was by a guy that I'd actually gone out with—and, I'll tell you what, I saved him a massive headache," Jeffrey said, laughing. "That was one of the worst dates I ever went on. It was just awful. But it worked out with us."

Life moved on. The two men moved in together, fostered and then adopted a son, and in 2004, when Multnomah County in Oregon briefly legalized same-sex marriage, they drove to Portland and got married at the courthouse. The next weekend, they had a little reception and potluck at their home in Seattle.

Things were good, and it felt like the world was finally making some progress. Then, about a year later, Jeffrey and Rodney, along with around 3,000 other couples, received a letter informing them that their marriage had been nullified after voters in Oregon, and then the state supreme court, decided that marriage could only be between a man and a woman.

"I don't think I've ever been so angry in my life, holding that piece of paper that said our marriage was nullified," Jeffrey says. "How dare they? It was just wrong. Wrong. I was surprised at how much it angered me."

Ten years later, when the US Supreme Court legalized same-sex marriage for good (or at least for now), Jeffrey and Rodney got married for a second time. But all these experiences—having a court invalidate his relationships not once but twice, surviving the AIDS crisis, losing the first man he'd really loved, seeing countless friends and lovers get thinner and thinner before they just disappeared—have given him a vastly different perspective on what is happening right now in American life than many younger queer people, who feel hurt and oppressed when someone uses the wrong pronoun or when a straight actor plays someone gay.

"The angry part of me is angry because they don't get it, but the other part of me is like thank god they don't get it. Thank god they don't have to live through this. Thank god they will never know what it's like. You can't know what it was like unless you were there, and they will never know that. That is something I should be happy about and celebrate, the fact that they don't know what it was like. But the fact that they don't seem to care to find out, and then they want to tell you how bad their lives are, that is really difficult to deal with. I want to be the sweet older person, but inside it's like, 'Why the fuck are you complaining? Do you know how lucky you are?'"

For Jeffrey and many others like him, they see a failure on the part of many (if not most) younger queers to recognize what, exactly, men and women just a couple of generations ago went through. This is hardly limited to gay rights. As much as there's a generational divide between old gays and young queers, there's a generational divide between old straights and young straights, too. Harvard psychologist Steven Pinker told me this phenomenon could be called "generational amnesia."

Jonathan Haidt, a social psychologist at NYU, said that while this isn't exactly new, social media exacerbates this issue. "Activists are now deluged with posts about violations of their values," Haidt told me. "Since there will always be hundreds of such cases every day, in a country with 350 million people, it is hard to judge rates and trends. Even if by some objective measure, offenses were down by 95 percent, the remaining 5 percent is now so much more visible, people who have only known social media have only known a deluge of outrage stories."

And there is, to be sure, plenty to be outraged about. Today's students are saddled with so much debt that many will never get out from under it. Housing keeps getting more expensive while wages run flat. The Trump administration's actions on the southern border have created a humanitarian crisis. The planet is burning while people in charge stand idly by. Gay and trans rights in other parts of the world just don't exist. But when it comes to gay rights in the US, Jeffrey says, "we've made so much progress. So much. I really appreciate youth, and I think the world is in their hands now. But life is better now than it's ever been, at least for gay people. I really wish more young people could see that."