What You Can Learn From Snorting Two Lines of LSD

Some ways of doing psychedelics are safer than others. 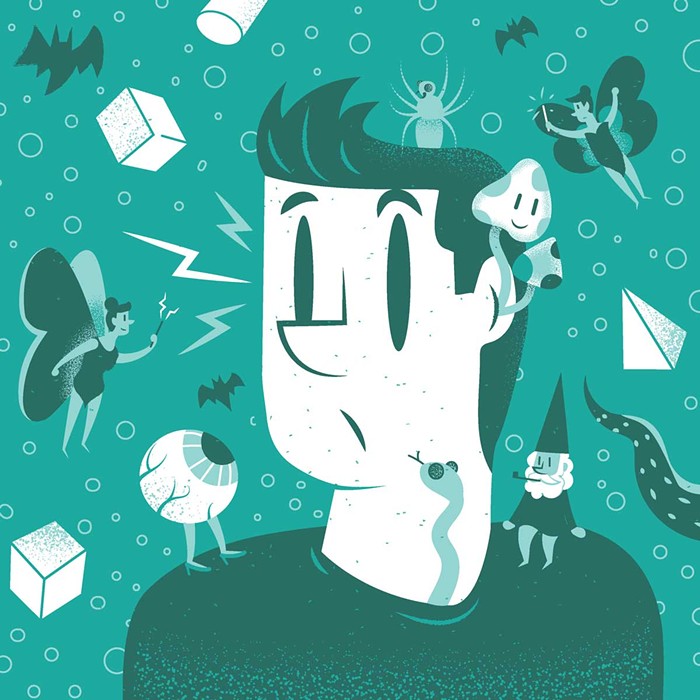 In the summer of 1972, someone at a dinner party in San Francisco made a terrible error. They mixed up their cocaine with their LSD and accidentally served lines of powdered acid, two apiece, to seven of their friends.

A drop of acid can send someone into an eight-hour hallucinogenic trip. Snorting milligrams of the chemical's powdered form is unthinkable. These people had just inadvertently consumed a massive dose. Within five minutes, they were vomiting. After 10 minutes, five of the people were comatose, according to a case report in the Western Journal of Medicine. These people appeared to be on their way to sudden death.

But no one died. Within 12 hours, every single patient was conscious. After a year of follow-up exams, there were "no apparent psychologic or physical ill effects" in any of the eight individuals, according to the case report.

There's a high probability that you, now that you're in college, will come across psychedelics at least once during your higher education. Every drug has its milieu, its natural social environment. Just like meth wallows in misery and trailer parks, and cocaine mingles with mistakes and nightclubs, psychedelics (with their mind-expanding quality) fit naturally at universities where young people are regularly encouraged to challenge their usual way of thinking. So what lesson should you take from the story of the San Francisco dinner party?

To begin with, our government's classification of psychedelics as the most dangerous type of drug on earth makes no sense. Though what happened to the dinner party guests is scary, it also might be the record for most LSD ever consumed by a human. There are no known fatal human overdoses on LSD, which has led multiple scientists to determine LSD is not toxic. The theoretical lethal oral dose to humans, based on intravenously shooting mice with LSD, is somewhere around 20 milligrams, according to erowid.org, an internet hive mind for psychedelic information.

Teri Krebs, a neuroscientist at the University of Norway, has said psychedelics in their pure form are as risky as riding a bike or playing soccer.

"It is generally acknowledged that psychedelics do not elicit addiction or compulsive use and that there is little evidence for an association between psychedelic use and birth defects, chromosome damage, lasting mental illness, or toxic effects to the brain or other body organs," Krebs wrote in a letter published in the Lancet, one of the world's oldest and most prestigious medical journals.

But the story of this dinner party also illustrates a profound irony of psychedelic drugs like acid, mushrooms, or mescaline: They may not be harming your organs like a cigarette or vodka does, but the very essence of large doses of these drugs is madness. Many of the hallmarks of a "successful" psychedelic trip—temporary paralysis, severe visual distortions, extreme confusion—seem a lot like temporary bouts of insanity.

In fact, when researchers in the early 1900s started discovering and synthesizing these drugs, they first called them psychotomimetic, which literally means mimicking psychosis. It wasn't until 1956 that the term psychedelic, or "soul revealing," was first coined.

That renaming coincided with a massive amount of research into psychedelics, with doctors administering LSD to more than 40,000 patients from 1950 to 1965 and producing convincing evidence that psychedelics could be an effective treatment for a wide range of disorders from alcoholism to depression. That research was stunted by the American prohibition of psychedelics in 1970, but research is now restarting. Johns Hopkins University announced this year that it is launching an entire center dedicated to psychedelic research.

So how do you ensure that your trip on psychedelic drugs is revealing of your soul and not corrupting of your mental stability? Here are four tips to keep in mind if you decide you want to take these fascinating drugs.

First, consider your medical history. People with a history of mental illness are at a greater risk of developing adverse effects from psychedelics (and also from pot, by the way), and many of these drugs can create harmful interactions with antidepressants and heart medications. Anyone on prescription medicines should be wary of taking these drugs without medical supervision.

Second, consider the drug's source and purity. LSD isn't toxic by itself, but an adulterated version could easily be dangerous. Psychedelics like MDMA (aka Molly) are particularly prone to adulteration with dangerous additives like meth or even bath salts. The best way to safely consume psychedelics is by having them tested by nonprofit testing services like drugsdata.org or by buying an at-home drug testing kit.

Third, consider the dose of the drug. Microdosing, which involves taking a fraction of the dose that is required for a full hallucinogenic trip, is becoming increasingly popular because it offers a way to lightly experience the effects of psychedelics. Even if you want to feel the full weight of a mind-bending trip, it is probably a good idea to start slow by first microdosing and seeing how you respond.

Finally, consider where and when you are taking these drugs. The psychedelic experience, more than any other type of drug, is integrally tied to the context in which you take the substance. Psychiatrists specializing in psychedelics call this contextual information your set (or your mind-set when you take the drug) and your setting (the place and environment where you take the drug). For your first time, don't do it at a music festival where you're surrounded by crowds of people. Try doing it in a park with a few trusted friends, or a very comfy room in your house. Ideally, one of your friends will not get high and can help you if you start freaking out.

It's no accident that ancient uses of psychedelics, like the thousand-year-old indigenous use of the hallucinogenic substance ayahuasca, always occurred in tightly controlled religious settings where individuals were intentional with their mood before entering the trip, outside stimulus was limited, and there was an expert ready to guide them through the experience. Taking large doses of these drugs when you're in a hostile mood or in an unruly environment—say, Pike Place Market on a Sunday—is only asking for a bad trip.

And that "bad trip" might be the biggest danger from psychedelics. A powerful dose of psychedelic mushrooms probably won't kill you, but that doesn't make jumping out of a window or running into traffic while on mushrooms any less dangerous. (And eating the wrong kind of mushrooms can kill you, so don't go off into the woods just picking and eating anything that looks right.)

Psychedelics are powerful drugs that demand respect. Use them intentionally, and your understanding of reality, of the earth, of your connection to other human beings may be forever changed for the better. But disrespect them, and you're asking for a problem. So make sure you know what you are taking, have friends to guide you through the experience, and remember to never mix your cocaine with your LSD.