A Bakery in Bremerton That's Worth the Ferry Ride

Saboteur makes the best croissant I've ever had. 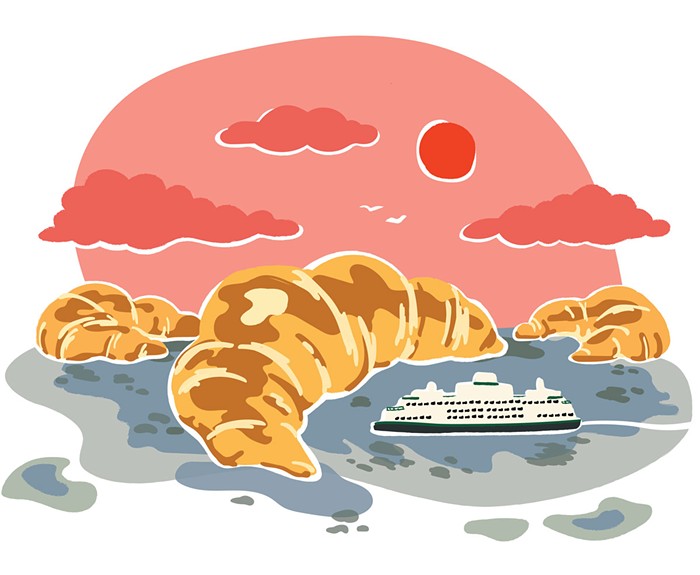 The first thing to know about the croissants at Saboteur Bakery is that you should never, under any circumstances, eat one over your lap without some kind of napkin coverage.

I learned this last winter on a day trip to Bremerton. My companion and I took our pastries to go (there's no seating at the bakery), and I was riding shotgun in the car. I took the ham-and-cheese croissant out of the bag, and as soon as I bit into it, my lap was covered in pastry flakes.

Saboteur and its croissants are the creation of Matt Tinder, a pastry chef who worked at Michelin-starred restaurants Coi and the Restaurant at Meadowood in California before he and business partner Kate Giuggio decamped north to Bremerton, a navy town on the Kitsap Peninsula known less for its food scene than for its shipyard and that one MxPx song from the 1990s. This bakery, however, could change that.

Tinder and Giuggio first opened Saboteur in a storefront on Fourth Street that housed a pole-dancing studio in back, but they've relocated to Manette (2110 E 11th St), a charming neighborhood near downtown. The space is spare and the walls mostly unadorned, but the smell that wafts outside is inviting.

On a recent Friday morning, Tinder took a few minutes from pulling racks of pastries out of the oven to chat. He said that after living in cities for most of his adult life, he was ready for someplace more relaxed—and cheaper. He found it in Bremerton.

"The whole purpose was to open a place where I could use really expensive ingredients and do it my own way. But in order for that to be successful, you have to start off with really low rent," he said. "If I pay a lot in rent, I have to sell 100 ham-and-cheese croissants to make a profit. I can't make 100 ham-and-cheese croissants that taste this good."

And "good" is an understatement. It took about a second after biting into that first one to realize that this wasn't just the best croissant I'd ever tasted; it might have been the only good croissant I've had in my life. Every other croissant seemed like something you'd get at a continental breakfast.

And it's not just the croissants (which also include plain and chocolate-filled), everything Saboteur sells is excellent. The raspberry brioche, for example, was as pillowy as a doughnut, and the jelly inside, according to my sweet-toothed taste tester, was "perfectly sweet and perfectly tart." I was more drawn to the crumbly currant scone. They also make cakes, brownies, and an almond financier.

Saboteur is a morning place, and they make different things each morning, so you just have to go and see what they have. When they sell out of that day's goods, they close. If you don't want to miss out, make sure to get there plenty early.

However, they reopen every Wednesday at 4 p.m. to sell pizza, and pizza only. It seems like a blend of Neapolitan and New York styles—the crust is both crisp and chewy, but the cheese is evenly distributed on top. It does not last long: They are usually sold out by 7 p.m., and for good reason. The Margherita is as good as any pizza I've had in Seattle.

Of course, an hour by ferry is a long way to travel for food, especially if you don't know what kind of pastries they're going to have that day. But the ferry ride is so pleasant that tourists take it for fun. If you're lucky, you might spot a whale off the boat. And if you time it just right, you may catch the sunrise over Seattle.