A few of my favorite places are in Lynnwood, Greenwood, and the International District. 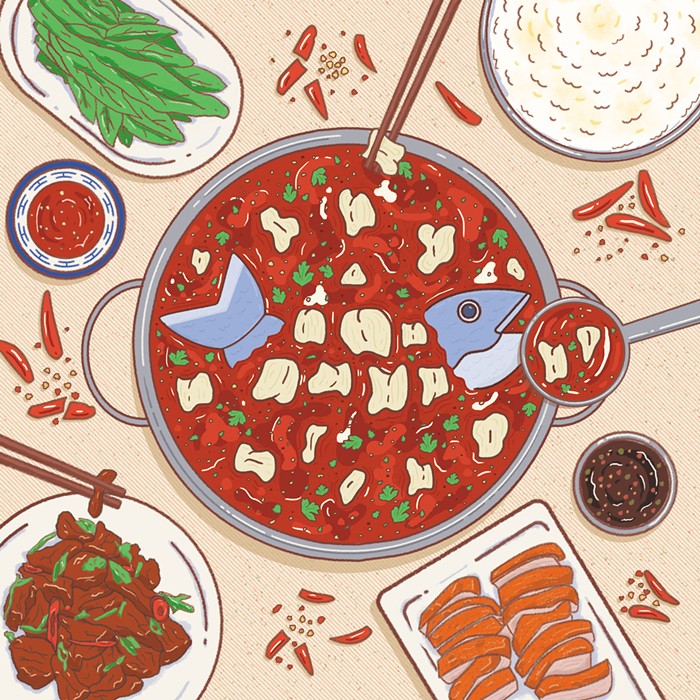 Let me just start by saying that I was a mortifyingly late convert to Szechuanese food, especially coming from a city where it's so well represented.

Yeah, we all liked "Chinese food" growing up, but even at its most authentic, it was toned-down Cantonese food we liked, and Chinese American food most of the time. This isn't unusual in places where there are no authentic Chinese options, but here we had no excuse. I blame the common, xenophobic fear among non-Asian Seattleites—er, okay, we can just say white people—to really dig into the depths of a Szechuanese menu, with surprise organ meats around every corner.

Folks can also be hesitant to order the really crunchy, authentic stuff because they're worried it'll be too spicy or are freaked out by being served, like, a whole fish with an eyeball in it. Just spitballing here, but I think the names of the dishes are a contributing factor too, since when translated to English, they end up being like "water-boiled fish" or "meat returning to pot" and don't sound super appetizing or interesting. You don't know what you don't know, so in my family, we'd stick to ma po tofu and kung pao chicken, maybe some dan dan noodles, and that's it.

Horrifying. We could have been eating at Seven Stars Pepper the whole time.

It was the dearly departed Jonathan Gold, food critic at the Los Angeles Times, who pushed me to reach out and try next-level Szechuanese food, and not very long ago, either. It wasn't until I watched him wax romantic about a Chengdu-style spot in City of Gold, the 2015 documentary about his life, that I started to get all sudsy about the stuff.

So hey, this isn't a piece shouted down from a high horse by some self-appointed expert on someone else's culture. Just a humble, tender love letter from a student. I love Szechuanese food. I love learning about it. I love its deep, complicated spice profiles, and all the fungi and pickled vegetables and downright somatic qualities of the flavor combos.

Like, say, the aforementioned water-boiled fish, with chopped red chilis and ginger and all those zappy, electric Szechuan peppercorns bobbing an inch deep on top. Breathing in the fragrant, pungent broth when it's set before you, perfuming all the pockets of your skull, practically numbing your lips in advance. The fatty, herbal, and umami aromatics commingling in an earthenware pot of stewed short ribs. Oh god, and all that rendered-down lamb fat in the cumin lamb, studded with cumin seeds and polka dots of crimson chili oil, which you then pour over your little cup of rice. Crispy, darkly flavored tea-smoked duck and the sound it makes when you crack into the skin. Steaming crocks of Chongqing soup noodles in sesame-chili-vinegar broth fogging up your glasses when you pull up your first tangle of hot xiaomian, slick with oil, scallions clinging.

If you're a semi-novice like me, good news: You can't throw a Lime Bike into a waterway in Seattle without hitting a fantastic Szechuanese hot pot/noodle shop. It's been a fun game to scout out the ones I haven't tried yet. Not every dish is for everybody, particularly if you don't like organ meats—at Chef King the other day, I ordered the pork belly with chili and was served pork intestine, which I should have expected, heh. (We ate it anyway, it was fine.) But if you don't experiment, that's how you end up wasting half your life on chop suey, right?

So far, my favorite spot is a cozy cinder-block hut just off Highway 99 in Lynnwood, next to the roller rink, that looks like a public restroom at a beach. Taste of Sichuan (6124 200th St SW) is almost always deserted, and when you walk in, the hostess greets you like it's V-day in Times Square, she's so jacked to see you. The menu's descriptions are spare, but the real shit is all killer, everything, so our rule here is to order one thing we've never tried before.

The dish at Taste of Sichuan that I'm having lucid dreams about once a week is the fish soup with pickled vegetable, which we picked randomly having no idea what we were in for. The chunks of fish are just heartbreaking, so slightly and perfectly are they poached in the briny, spicy, gingery, citrusy broth, and the yellow pickled vegetable is light, still crisp. This soup has powers. It flowed up our sinuses and instantly cured our stressed-out souls and made our digits tingly. I poured the leftovers onto rice for breakfast the next morning, so I got a bonus cured soul for an extra day.

It's hard to get bad Szechuanese around here, so you certainly don't have to trek out to Lynnwood. My list of runners-up includes Sichuanese Cuisine in the International District (1048 S Jackson St)—they bring the HEAT—and Greenwood's whimsical Chef King (101 N 85th St), which does omakase-type options and innovative creations, like the rock candy duck, as well as the traditional standards.

Little Chengdu by Franklin High School (2815 S Hanford St) is a newish spot known for its hot pot, small plates, and lots of tongue, kidney, and tripe, if you roll that way. The legendary Seven Stars Pepper (1207 S Jackson St), everyone's darling for hand-shaved noodles, is still repping in the ID after almost 20 years. Szechuan Noodle Bowl in the ID (420 Eighth Ave S) gets an honorable mention for its sesame noodles, dumplings, and green-onion pancakes, which every other Szechuanese place has, but theirs are just a tick better.

I still have loads to learn. I specifically need to educate myself further on the four different styles of Szechuanese food, and what makes the Chengdu, Chongqing, Zigong, and vegetarian Buddhist styles distinct from one another. But I can't wait to collect more recommendations, sink more cash into local independent restaurants, and get some more soul-curing research done ASAP.