This Pot Is Bananas

Can banana cannabis save you from another depressing winter? 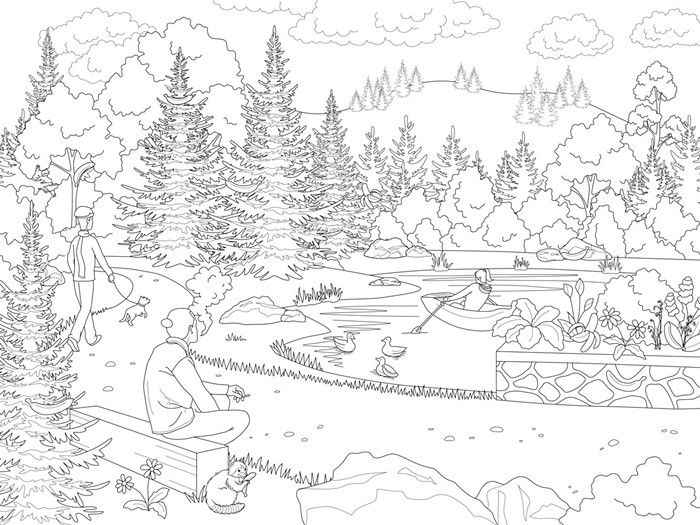 There are 14 hidden bananas (or bunches of bananas) in this image. Rachelle Abellar

A few weeks ago, I drove east toward the Cascade Mountains on damp roads shaded by evergreen trees and lined with decomposing leaves until I found a farm that smelled like bananas.

I went to Fall City and found the tropics. How on earth did I find bananas growing in January in the same place where Twin Peaks was filmed? Because I went to a pot farm. It turns out, cannabis can taste just like one of the world's most popular equatorial fruits.

Banana cannabis varietals—with names like Banana OG, Strawberry Banana, and Banana Kush—are being grown across the state, from Spokane to Seattle, and it might just be the best weedy way to get through the winter doldrums. Not only do these strains of weed smell and taste like you're on a sandy beach somewhere a thousand miles south of Seattle, but smoking them often creates a mildly relaxing high, just like you're sitting on said beach.

The plants I could smell in Fall City were Strawberry Banana pot grown by Saints, a popular pre-rolled-joint producer. As I toured the small indoor pot farm, I reached out to the engorged cannabis flowers and rubbed their sticky leaves. When I brought my fingers to my nose, I could smell berries and the unmistakable odor of bananas, like banana candy or that banana-flavored fluoride they give you at the dentist.

"We try a lot of genetics, and a lot of them go by the wayside—but for some reason, our bananas never go away," Perrigo said. "They are beautiful, they taste amazing, they're super high in terpenes, and they smell like bananas. When we put them up, they immediately sell out. There's something very specific about that. That stuff sells out in one day."

A few weeks earlier, I had taken a pack of Saints Strawberry Banana joints up to the mountains, where I smoked one of the joints while snowboarding. Boulders piled with feet of snow had formed into sloppy towers like soft-serve ice cream. I thought I was in a wintery Dr. Seuss children's book; then I lit a joint and closed my eyes, inhaled the flavor of ripe strawberries with a hint of banana, and felt like I was somewhere far away from the cloudy mountains, as if the frozen snow under my feet had melted to water and my snowboard had changed to a surfboard.

"I personally find the banana strains to be like a little vacation—relaxing but not sedating, just peaceful and chill with an almost smoothie kind of taste and an aroma that reminds me a little of Runts candy," Elliott said.

These pot varietals are very popular, but exactly why these strains smell like bananas still remains a bit of a mystery.

But that tropical banana aroma might be coming from something other than just terpenes.

A High Times article from 2016 claimed that tropical fruit cannabis like banana varietals don't owe their flavo r to terpenes, but rather a different class of natural plant compounds called esters. The article claimed a particular ester, isoamyl acetate, was responsible for the banana cannabis flavor.

That theory makes some logical sense. Candymakers use isoamyl acetate to re-create the banana flavor, and bananas themselves are full of this compound.

However, there has been hardly any work done on what esters do for the cannabis plant. Scientists are only just beginning to learn about how cannabinoids (like THC and CBD) and terpenes work together. Pot's other minor constituents have essentially never been studied.

Steep Hill, one of the world's leading pot laboratories, said they have never tested pot for esters. Jeffrey Raber, CEO of the California pot lab the Werc Shop, said esters are part of a class of compounds in cannabis that occur in small quantities and are not well understood.

"Cannabis is known to produce other esters, aldehydes, and ketones that can impart additional flavor elements," Raber said. "It isn't all terpenes creating the flavor profiles, [but] how much of which ones are made, I'm not sure, as that world is exceptionally complex."

But the jury is still out. Nick Mosely, CEO of Redmond pot lab Confidence Analytics, said his staff analyzed the test results for dozens of banana strains and didn't find isoamyl acetate in any of the samples. His staff found a closely related ester, but Mosely doubted this compound was responsible for the banana flavor.

"Here's the thing, there are esters that occur naturally in cannabis, but they exist in very small amounts compared to the terpenes," Mosely said. "I personally find it very hard to believe that an ester in low abundance is giving banana strains their characteristic smell when limonene and myrcene are both present at several thousand parts per million (as are several dozen other terpenes that far outclass any of the esters in terms of abundance)."

Mosely said that banana cannabis plants are exceptionally high in limonene, a terpene that smells like citrus. Some limonene in that pre-rolled Strawberry Banana joint might be what transported my senses from the snowy Cascades to the tropics.

Limonene has been found to reduce anxiety during experiments on mice, and depression during experiments on humans. In a 1995 study, researchers exposed 12 patients hospitalized for depression to limonene-laden citrus fragrance. Nine of the patients reported feeling less depressed after the treatment and were able to "markedly reduce" their pharmaceutical depression medication, with the study's authors writing that "the treatment with citrus fragrance... was rather more effective than antidepressants."

That sounds like a good enough reason to me to smoke some banana cannabis this winter.