Eating My Way Around the International District

I look for any reason to eat in this neighborhood—or even just stare at food through windows. 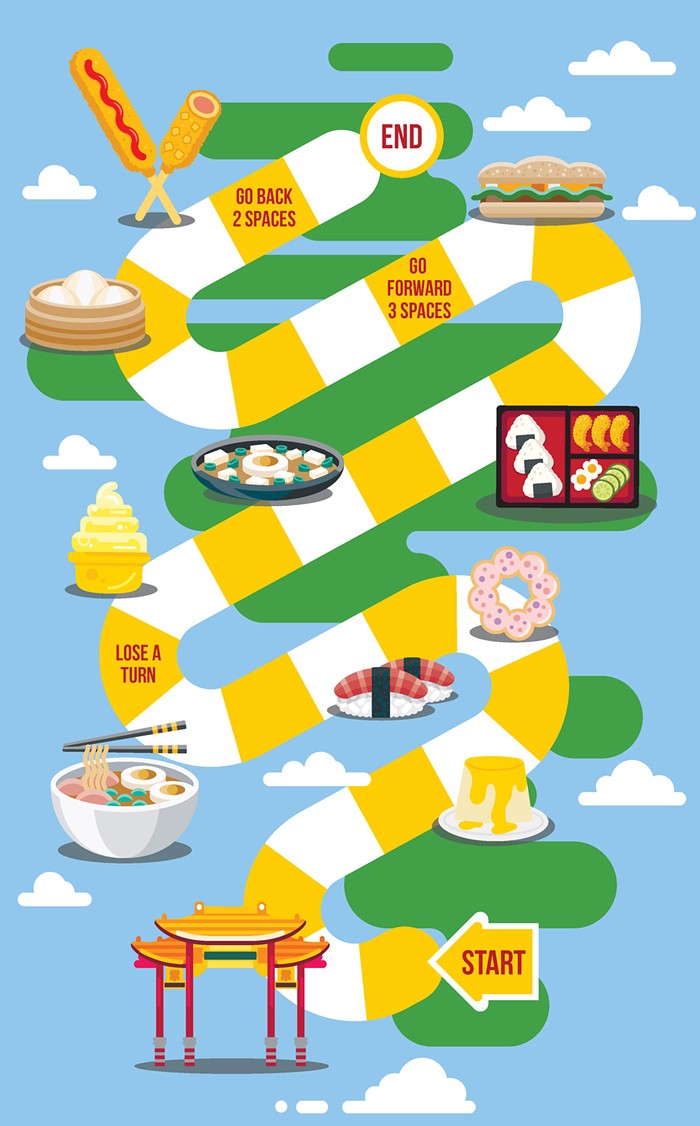 Walking around the ID when you're stoned is like a game. Anthony Keo

My biggest regret since moving to Seattle is not eating my way through more of the Chinatown-International District when I was living in the heart of it.

In the mornings, there were always yeasty scents wafting through the air from the nearby Dim Sum King. It opened daily at 6:30 a.m., and I'd often find myself riding the streetcar to work with someone nibbling Chinese doughnuts, or baked coconut and custard buns, or char siu sou (a type of flaky Chinese pastry rolled in sesame seeds and stuffed with barbecue pork), or egg tarts, or footballs (deep-fried wontons stuffed with meat and shaped like a football)... all things I could not eat.

Back then, I was a sad panda: gluten-free and hating it. I avoided Dim Sum King and its ilk because of dietary restrictions. This practice of avoidance is part of the reason I never thoroughly explored my hood while I was living there. But I've reached the point of acceptance in my relationship with gluten, and the longer I've been off the wheat, the more obsessed I've become with food, all food, including and sometimes especially the stuff I can't eat.

I have become a food appreciator—living vicariously through others' gluten enjoyment or simply filling my eyes (if not my belly) with delicious sights—as much as a foodie. And the ID is ideal for wandering around while toastily blazed from a bit of tasty-tasty, discovering new haunts amid the old favorites, munching on and admiring from afar food I can or cannot indulge in.

Kau Kau is where I go for Chinese barbecue. According to the sign, it's the "best BBQ," and I'm there for the pork. Sometimes I get the three-pork combo platter (pork spare ribs, barbecue pork, roast pork) for variety. The roast pork is the muskiest and porkiest of the three, with a layer of fat that's thicker than the meat, but worth eating around for its crispy crust of skin, though I prefer the lightly sauced barbecue pork. I'm a traditionalist.

Uwajimaya is also perfect for a good stoned wander. That Asian specialty market has whatever you want, from dim sum to bento boxes to fresh-made sushi, and walking around filling up your eyes with it all, from the known to the unknown, is as satisfying as actually walking out with something. I spent untold hours there my first four (unemployed) months in Seattle.

The gluten-free lemon tea cakes at Fuji Bakery, not to mention their brûléed and custard desserts, and the odd baked surprises (once there was gluten-free chocolate pound cake) always draw me into the East-meets-West artisanal bakery and patisserie. Also, their pastry case is so much yum, especially any and all of their flaky croissant-based treats (like the matcha chocolate croissant or pommes, a croissant turnover filled with house-made vanilla custard and cinnamon-seasoned apple), or fluffy Azuki buns, or fruity clafoutis or tarts.

The Dole Whips at goPoké are my go-to cold, airy, pineappley sweet treat; the Pina Dolada is as the name implies, basically a pineapple soft serve with added coconut glaze and shaved coconut flakes sprinkled on top, garnished with a red gummy bear. For a savory, salty appetizer to counter all that sweet, the nearby Green Leaf's bot chien (fried rice-flour cakes topped with egg and green onions) always treat me right.

As far as new-to-me joints, there's Dochi, which serves its crispy-on-the-outside, chewy-on-the-inside mochi-doughnut hybrids from a small stall in the Uwajimaya Village food court; every time I breeze by, there's always a line of people waiting to eat them. They are not gluten-free, despite being made with rice flour, but goddamn do they look delectable. The same goes for the "Korean corn dogs" hawked at Chung Chun Rice Dog; the Korean street food chain's specialties are hot dogs dipped in rice-flour batter, coated in panko or potatoes or crushed ramen noodles, and deep fried. There's a few with mozzarella; I watched two young women eating them through the window, gooey strings of cheese stretching from mouths to meat sticks, and I audibly sighed.

And then there's my new favorite happy place, Hood Famous Cafe + Bar, where you can get a selection of the same cheesecakes, cookies, and other goodies you'll find at its flagship Ballard location, but with added specialty coffees and a menu featuring Filipino merienda (light meal) items, including quiche and to-die-for gluten-free mochi waffles. I ducked in and ordered the smoked salmon variety as suggested by the server. After one bite, I wanted to rub it all over my face, which makes no sense because then how could I eat it? Also, I'm not usually a fan of smoked salmon, but in this format, atop a slightly sweet mochi waffle slathered in calamansi-and-chive cream cheese, my mind was changed. Blown even. Also, the matcha latte I washed it down with was just the pick-me-up I needed.

While I can't eat 99 percent of the goods at wildly popular Taiwanese bakery and cafe chain 85°C, which opened on the corner of Jackson and Fifth Avenue about a year or so ago, it is worth breezing through and feasting my eyes on their well-lit gluttony of sweet and savory puff pastries and buns and loaves and rolls and twists and more, from fluffy brioche to chocolate chip bowls. Once, I found a mango panna cotta and bought it with due haste; it was the only thing in the entire bakery that didn't have wheat. And it was divine.

Some quick hits: Slurpy corporate dumplings at Dough Zone, or frills-free Northern China–style (Tsingtao) offerings at Ping's Dumpling House; $5 banh mi at Saigon Deli; whatever the daily special is at Tsukushinbo
(Saturday is old-school Tokyo ramen with gyoza); the Love Is a Battlefield roll at Ten Sushi.

Just go. Wander around, feast and gaze and yearn. And do it while these places still exist, before gentrification really takes hold.