What happens when you take those over-the-counter "male enhancement" pills? Only one way to find out. 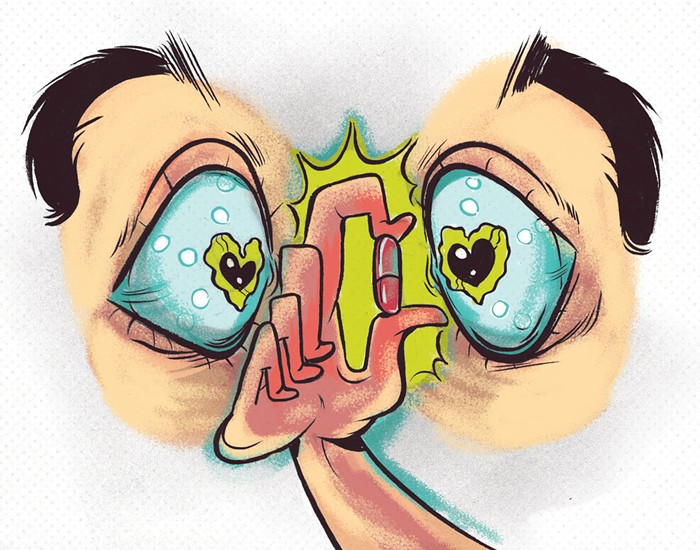 I bought mine at the gas station 7/11 at the corner of Madison and 16th. Terra DeHart

You can find so many things at a gas station convenience store. Slushies. Mystery meat hot dogs. Enough caffeine to energize a small militia. An American gas station can feel unincorporated, lawless.

But of all the things you can find at a gas station, nothing feels more lawless than those "male enhancement" pills.

The most famous of these is the legendary Rhino pill, with a big Rhino on the packaging, the word "RHINO," and typically a number—Rhino 7, Rhino 25, Rhino 69. Who knows what the numbers mean.

Recently, according to the FDA, unapproved Rhino pills have been showing up in single-serving sizes under names like Gold Rhino 25000, Platinum Rhino 25000, and Krazzy Rhino 25000. Their packaging advertises that one pill lasts seven, nine, or even 14 days. Yes, FOURTEEN DAYS. (Side note: If you have an erection lasting more than four hours, you need to go to an emergency room immediately.)

While I don't have any reason to use a "male enhancement" pill—I'm not bragging, but I'm in my 20s and my junk works just fine—I've always found these pills alluring. Recklessly, I mentioned this at a Stranger editorial meeting for this Valentine's Day issue, and everyone was intrigued. I'd landed my dick an assignment.


"Do these pills really work?" I asked the cashier at the gas station 7/11 at Madison and 16th on Capitol Hill.

"I don't know," he said, shrugging. "Need anything else?" I think he wanted me to get the hell out of there.

"No, I'm good," I said dejectedly, taking my bag of little red pills.

I'd selected two brands: Extenze Plus and Ageless Male TONIGHT. (Male enhancement brands love to write things in ALL CAPS.) I opted against buying a Rhino pill at the nearby Shell station, having read a warning issued by the FDA that some people who used the FOURTEEN-DAY BONER pill experienced "chest pain, severe headaches, and prolonged erections... that led to surgical intervention and hospitalization."

Extenze Plus came in a pack of five. Apparently, it's more like a daily multivitamin. The packaging read that it's "doctor approved" and increases "SIZE," "PLEASURE," and "PERFORMANCE."

Extenze got its notoriety through infomercials starring accused rapist Ron Jeremy. In one infomercial I watched, Jeremy would yell at men to "GET UP!" and just "TRY ONE BOTTLE!" to get "25 PERCENT BIGGER!"

Professional athletes are banned from taking Extenze, since it contains micronized DHEA, considered to be a doping agent. Olympic track champion LaShawn Merritt received a two-year ban for taking Extenze in 2010. Merrit, then only 23, said he didn't read the "fine print" on the pills—it is, after all, easily available at gas stations—and called it a "foolish, immature, and egotistical mistake."

I took my first Extenze pill before lunch, during a workday. I figured that if I took it while at work, I would avoid a placebo effect that might kick in if I took it at home with my boyfriend.

I went to look at myself in the mirror. My glasses were fogged up. My face was pinker. My skin warmer. I needed to go home. I took my lunch break.

On my way home, I noticed older men staring at me. Were they checking me out? Cruising? Did they sense the Extenze? Had they taken Extenze? "Maybe they just notice how sweaty I am," I thought. "It's probably that."

When I got home, I was hard. But it wasn't 25 percent bigger, like Ron Jeremy claimed. Actually, it wasn't bigger at all. It just looked like it had a LOT of blood flowing to it.

"This can't be safe," I thought. I felt like I was in Magic Mike XXL. I masturbated. Then I masturbated again. I felt weird.

When I got back to work, my pupils were massively dilated, like a shark's. Or like it was 6 a.m. at the club and I was on molly. A few hours later, the pimples started. First a few on my chin. Then near my eyebrows. Between the pupils and pimples and pulsating blood, I looked scary.

I couldn't believe I picked this up at a gas station. I decided to give Extenze a break.


I moved on to my second package of pills, Ageless Male TONIGHT. (I love a good capitalization.)

I felt more comfortable with these because there weren't any ingredients that could get someone kicked out of the Olympics. Its primary ingredient was yohimbe extract, which comes from an African tree and apparently helps with erectile dysfunction AND promotes weight loss.

This was like taking an entire spice cabinet, throwing some African bark into it, and selling it as a magic pill.

It was a Saturday night. I pulled out Ageless Male TONIGHT and gave one to my boyfriend. He took it without fear. I was more anxious. I didn't want more pimples. We took it at around 9:45. It was supposed to kick in within an hour.

By 10:37, the sweating started. "Oh god," I thought. "More sweating." My body got warmer. My throat, I thought, was maybe beginning to swell.

"How do you feel?" I asked my boyfriend.

"I don't feel anything," he said. "Maybe I will in another hour."

We waited another hour. Still nothing.

We went into the bedroom and proceeded to have incredibly passionless sex. The entire time I wondered if my throat was swelling up. "Do you feel like an ageless male tonight?" I asked.

"I always feel ageless," he said. We laughed, then got soft. Eventually, we came—at the same time, even! But I don't think that had anything to do with the pills. We stayed up until 4 a.m. I concluded that these were just caffeine pills with a vegetable blend.

The next day, my boyfriend asked if he could have the Ageless Male TONIGHT pills. "Why?" I asked.

"They get the blood flowing. I heard they're good to take when you work out."

He popped one and headed to the gym. At least they were good for something.