What science says about heartbreak—and how to get over it. 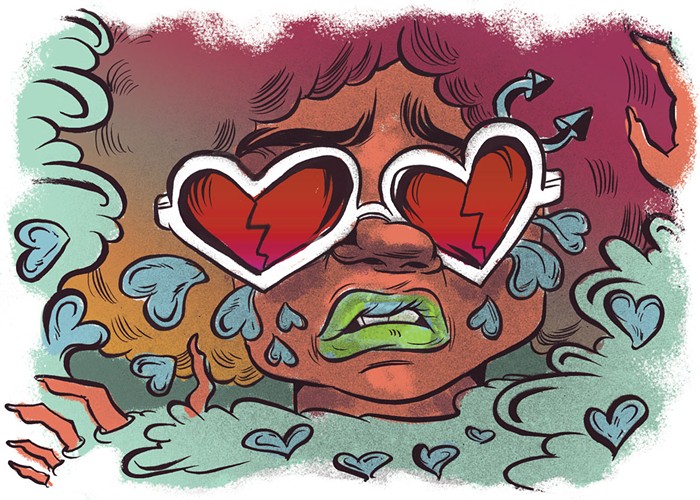 When we’re in love, the brain releases dopamine and oxytocin. When we’re rejected, those hormone levels drop. Terra DeHart
Tweet

When people talk about breakups, they often use words like "trauma," and this isn't really an exaggeration: Psychologists say breakups are right up there with serious illness and the death of a loved one on the list of the most stressful life events people commonly experience.

As anyone who's gone through it can likely confirm, heartbreak can have physical symptoms. It's not just our feelings that are hurt, it's also our bodies. This manifests in different ways. Some people can't sleep or eat, others sleep or eat to excess, but the commonality is often a sort of obsession. That's one of the hallmarks of heartbreak: We become consumed by thoughts of the person who hurt us.

Scientists have studied what exactly is going on in the brains of the heartbroken, and have found that when heartbroken people think of the person who rejected them, the same areas of the brain are activated as when we feel physical distress.

Other studies have found that heartbreak mirrors drug withdrawal. When we're in love, the brain releases feel-good hormones like dopamine and oxytocin. When we're rejected, those hormone levels drop. It can be a devastating experience, and one that is prolonged by exposure to the object of our affection—even if that exposure is in the form of photos, texts, or posts. This makes breakups especially difficult in the social-media era. You don't need to see the person who hurt you; you just open Instagram and your heart breaks all over again.

There are some basic steps you can take to help your recovery. For one, block your ex on social media. Delete the photos and texts. If you can't bring yourself to erase the entire history, print out a few photos and put them in a box (and then, when you're ready, leave it out on the curb on garbage day). While it's not always possible to completely cut off contact, the point is to decrease the number of triggers in your life. But there are other ways to get through it. Some of them are obvious (exercise, eat right), and others, as one Seattle woman discovered, are less obvious—and just a little bit illegal.


Ariel Meadow Stallings describes the day her life blew up as an "otherwise normal Tuesday." Her son was at school, she and her husband were both at home, and she suggested they have a little check-in about their relationship. Nothing dramatic, just a chat.

By the end of the conversation, her husband told her he was leaving. The marriage was over. "I was completely blindsided," Stallings told me. "Whether I should have felt blindsided is a different story."

After 18 years in the relationship, Stallings was absolutely wrecked. Not only had she just unexpectedly lost her husband, she'd lost a key part of her identity. Stallings was—and is—the author of Offbeat Bride, and the creator and publisher of the wedding resource Offbeat Empire. Her entire career is about marriage.

"As I was filing the divorce papers, I was also flying around the country coproducing 500-person alternative-wedding expos," she told me. "I would spend the weekend surrounded by couples and wedding vendors, and then I would fly home and cry and meet my lawyer." She wasn't just heartbroken, she was embarrassed. She'd written a book about her wedding (which was basically a rave in the woods on Bainbridge Island), and here she was, the Offbeat Bride, getting divorced. Everything she'd been doing all of a sudden seemed like a fraud.

"I would look at wedding pictures for my job and be like: 'Children! I've been selling you a lie! Run!'" she said. "Just from their body language, I could see the seeds that grow into the conflicts that grow into the end of the relationship. It was like looking at a baby picture and seeing a death mask."

Experts say you should avoid contact with your ex, but for Stallings, that wasn't possible. Not only do she and her ex share a child, they also share a wall: He lives in the apartment next door, an arrangement that seems crazy but actually makes her life, at least logistically, much easier.

"This would not have been possible even a couple years ago," she said, almost five years after he left. "In the beginning, I would actually throw up after seeing him. It was really, really bad. But now it's like we're in a band together, and the band blew up, but we have to keep going on tour. The tour is our 10-year-old. We make it work."

In the beginning, when the pain was most acute, Stallings wasn't content to just wait it out. She dove into therapies of all kinds. An incomplete list of her various exercises in healing includes: doing mindfulness meditation, attending a grief retreat, taking a burlesque class, going on Tinder dates, shooting guns, doing Reiki, reading self-help books, sound-bathing, chanting, writing, and seeing an energy healer. And, of course, there were the many hours she spent with an actual talk therapist.

Some of this was effective, some of it not, but Stallings says there were two things that really helped. The first was dance, which helped her reconnect with her body and made her more physically strong than she'd ever been before. She got so into it that she installed a mirror and ballet bar in her living room. And this makes sense: Exercise is a standard get-out-of-depression tactic. Physical activity releases some of the same feel-good hormones as love does, and it's certainly more positive than drinking or stalking your ex on Facebook.

The second thing Stallings did was less common and a lot more radical: This divorced, fortysomething mom hired a sex worker.


The idea came to her after a particularly weird Tinder date. The man, a six-foot-five opera singer who was going through a breakup of his own, was into spanking. And after he'd rattled her bones (almost literally), she realized this was something she wanted to explore.

"In talk therapy, I'd been working on issues of surrender and relinquishing control. And these are great intellectual issues to talk about, but it's a very different thing to be physically restrained and have to surrender," she said. And here was this stranger, physically dominating her in a way she liked—and maybe needed. She wanted more, but the guy ghosted her, and she realized this was probably something she should work on with a professional instead of some dude from Tinder.

Stallings doesn't want to get into the details of what she and the domme did together (although if you are truly curious, she wrote a book about it called Pros Before Bros that costs $200 and is available at Ada's Technical Books). What she did say is this: "There was a lot of conversation about goals and expectations and limits and consent. And then within that container, I was paying her to do whatever she wanted to do. Her job was to help me reach my goals; my job was to surrender into letting her do her work."

Despite the stigma around hiring sex workers (which is so rare among women that Stallings was an anomaly), the only shame or guilt she felt about the experience, she said, had to do with her class privilege (she's able to fly to San Francisco and pay a strange woman to dominate her while other people can't). Besides that, what she mostly felt was elation—and peace.

"I felt like I had regained a sense of agency," she said. "Once I was able to bring my body into the practice, I was able to make connections that I was not able to make intellectually. And then there's an orgasm at the end to lock in the lesson."

The experience was so positive that she thinks it could be helpful for other people, especially women, going through breakups or divorce. "I fully believe women would be better off paying other women to do this work with them rather than trying to do it with random dudes who are just trying to get fucked."

Five years after the conversation that changed everything, Stallings's life is different in significant ways. She's got a self-help book coming out soon called From Sh!tshow to Afterglow: Putting Life Back Together When It All Falls Apart. She spends half the week alone while her son is with his dad, and she has a boyfriend in another city who she sees every few weeks. And, perhaps the biggest change, she's genuinely content with her life. When I asked if she's glad that her husband left her, she said, without hesitation, yes.

"My life is richer and more full of joy, and it has a greater level of depth," she said. "By all metrics, I'm in a greater place of peace than I was five years ago. I'm grateful for that, and I've thanked my ex-husband for seeing what I wasn't able to see. Everything is better than it was. It's a cliché, but time truly does heal wounds." Time and, in this case, a little professional help.

What happens when you take those over-the-counter "male enhancement" pills? Only one way to find out.

The Horrors of Online Dating, the Science of Heartbreak, and the Mystery of Gas Station Sex Pills

Welcome to The Stranger's 2020 Love Issue

The winners of our essay contest.