A Road Trip Where You Don't Have to Drive

Going on a rural-transit adventure is pretty easy. Pacific Northwest Transit Daddy showed me the way. 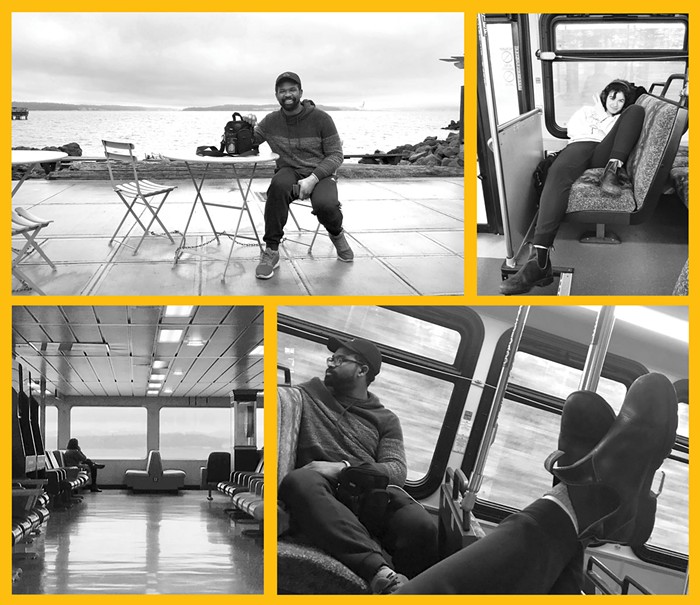 Darron is 28 and a veteran. He served in the US Navy for six years and has PTSD. He found that getting out into nature—and out of the city—was really good for his mental health. Driving wasn't. He never felt at ease in a car, a big barrier for him getting out into green spaces. Then he hopped on a rural bus route and the rest was history.

Darron does these trips for fun but also to spread transit advocacy. With everyone he meets along the way, he talks about transit. He shares rural transit's vitality on Twitter (@pnwtransitdaddy) and Instagram (@pnw_transit_daddy).

I met him at the Seattle Ferry Terminal at 5:30 a.m. on a Thursday. We were headed to Port Townsend for breakfast and would be back by early afternoon. The route he planned for us (using Google Maps) involved taking the ferry to Bainbridge (round-trip ticket: $8.50), catching a Kitsap County route 390 bus to Poulsbo outside the Bainbridge Island Ferry Terminal (ORCA card accepted), arriving at the North Viking Transit Center and catching the Jefferson County route 7 bus ($2.50 for a day pass), arriving at the Haines Place Park and Ride in Port Townsend, and then catching the 11 bus to Port Townsend's waterfront. Even though we were traversing three counties and several different transit agencies, the whole trip out there would take only two hours.

We grabbed seats at the front of the ferry, the blackness of the too-early sky reflecting images of ourselves back to us in the window. The military was a different time for Darron. He owned a Dodge Charger, he said, laughing and recoiling at the memory. He started to view the world differently when he sold his car.

"These rural-transit agencies are great," he said, grinning. Jefferson County is his favorite. I would see why, he assured me. It was about the community on the bus system. Jefferson County buses only take cash, though. We slightly panicked when the ferry was almost to Bainbridge and we couldn't find an ATM and the cafe didn't give cash back. There wouldn't be a lot of time to find cash because Kitsap Transit makes bus connectivity from the ferry terminal a breeze. A bus would be ready and waiting—and if we missed it, the rest of our precisely mapped-out schedule would be blown.

I had $6 in my wallet. "That will cover both of us for the whole day," Darron said. He went to fill up his thermos with hot water. He likes to bring orange rhubarb tea on these trips and mix it with some Brown Sugar Bourbon.

Outside the island ferry terminal, Darron pointed out the minimal signage. It was unclear where exactly to stand. But the 390 arrived three minutes later, and after we boarded, Darron chatted with the driver.

It was a 20-minute drive to the North Viking Transit Center in Poulsbo. Darron pointed out that the bus stops along the route were darkly lit, unsheltered, and often in ditches or bushes. While rural-transit routes are great and community-focused, they suffer from a lack of funding—a situation that will be made much worse if Tim Eyman's transit-gutting I-976 isn't defeated in the courts.

Darron talked with one man about his commute, and added that we were just up here joyriding to Port Townsend for the day. "Ah, that's a great way to see all the microclimates in the region," the man mused. "And reminds me of when I hopped on a bus in Hong Kong on a whim just to see the city."

Our next leg was on the Jefferson County route 7 bus. The fog clung thickly to the trees. The sky was starting to lighten. We crossed the Hood Canal Bridge four minutes after sunrise. The clouds were tinged with a delicate pink.

It felt euphoric to climb up and up the winding roads, dense green rushing past the windows, as the world came to life. We crept past sleepy rural towns where individual houses seemed to kiss the water's edge. There was the library, Darron pointed out, where many residents got their internet.

The best part was, I didn't have to worry about anything. The driver had it all under control. My favorite part of any kind of trip is the traveling, for whatever reason. I love the feeling of being en route, of having nowhere else I could possibly be but getting to a destination, and nothing to worry about but entertaining myself.

By the time we got to the Port Townsend transit center (where the McDonald's and Safeway serve as waiting rooms for passengers), it was a little past 8 a.m. We caught the 11 bus to the waterfront. It was filled with locals joking with each other. Darron engaged with them, as he engages with everyone he meets while riding transit. At one point, the jokes centered on the bus being a party bus.

"Hey, Doug, can we get a little disco?" a man in the back yelled. Doug flashed the interior bus lights and everyone cheered.

Port Townsend was eerily quiet. Apt for a weekday morning in winter. We ducked into a little coffee shop on the water and had a weird breakfast of cheese-covered hot dogs. Darron showed me what he carries in his transit bag: hand sanitizer, his wallet, his Orca card, a rain jacket, his water bottle, a spare battery, headphones, and more. Sometimes he'll bring wine or coffee or a book.

On our way back to Seattle, we found ourselves on a completely empty route 7 bus. Jefferson County just added these midday-route times, Darron said. We sprawled out. I put on my headphones and cracked a new book. Darron waded up to chat with the bus driver. I couldn't focus much on my book since the Cascades were poking out of the clouds. It was the first time I'd seen the mountains after a nearly two-week stretch of rainy days.

A woman got on. She asked me for a pen. We ended up chatting for the rest of the ride. On this day, I talked to more people on public transit than ever before. Or, really, strangers in general, thanks to Darron. The woman wrote down Darron's tea-and-bourbon combo to try out for herself later.

The only low point of the day was when we got back to the Poulsbo transit station and had to wait 30 minutes for the bus to the Bainbridge ferry. We got to the ferry right before it boarded and sailed back to Seattle, the caps of mountains on either side of Puget Sound shining. Mount Rainier broke through the clouds as if to say a quick "Whaddup."