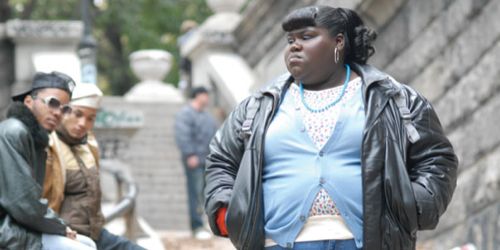 I am a fan of Lee Daniels' Precious—which chronicles the ridiculously hellish life of a Harlem teen in 1988—for some reasons included here.

But I'm also interested in the ongoing anti-Precious backlash, the most vitriolic contribution to which so far comes from the New York Press's infamous contrarian Armond White:

Shame on Tyler Perry and Oprah Winfrey for signing on as air-quote executive producers of Precious....Not since The Birth of a Nation has a mainstream movie demeaned the idea of black American life as much as Precious. Full of brazenly racist clichés (Precious steals and eats an entire bucket of fried chicken), it is a sociological horror show. Offering racist hysteria masquerading as social sensitivity, it’s been acclaimed on the international festival circuit that usually disdains movies about black Americans as somehow inartistic and unworthy.

Courtland Milloy at the Washington Post continues the criticism of Perry and Winfrey:

Of course, "Precious" would not have received nearly as much media buzz if Oprah Winfrey and Tyler "Madea" Perry had not signed on as executive producers. Oddly, neither has made a movie about rising above a challenging background and becoming a wealthy and influential entertainer.

Asked by Entertainment Weekly magazine why she got involved with the project, Oprah said: "I realized that, Jesus, I have seen that girl a million times. I see that girl every morning on the way to work, I see her standing on the corner, I see her waiting for the bus as I'm passing in my limo, I see her coming out of the drugstore, and she's been invisible to me."

Instead of making a movie about how she beat the odds, Oprah has taken to divining ugly life stories from black girls she passes in her limo. Maybe the Obama girls should stay off the sidewalk for a while.

To me, a honky watching Precious, the fact that Precious was made by a black filmmaker, based on a novel by a black writer, and co-produced by two media titans who also happen to be black communicated something to me about the film's value and, I guess, it's "truth." But according to Armond White (who, like Courtland Malloy, is African-American), it's all a con:

Perry, Winfrey, and Daniels’ pityparty bait-and-switches our social priorities. Personal pathology gets changed into a melodrama of celebrity-endorsed self-pity. The con artists behind Precious seize this Obama moment in which racial anxiety can be used to signify anything anybody can stretch it to mean. And Daniels needs this humorless condescension (Hollywood’s version of benign neglect) to obscure his lurid purposes.

And then there's this: The testimony of Mo'Nique, who portrays Precious' biggest monster, mother Mary. From an interview with the Associated Press:

AP: How would you describe the film?

Mo'Nique: It is about a forgotten people. It is about obesity. It's about molestation. It's about cruelty. It's about HIV/AIDS. But it's about triumph—and that's the beauty of the movie. People say, "How do you walk away saying it's beautiful?" When you watch it and you understand, through it all, somebody can pick themselves up and keep it moving, that's beautiful... So I was proud to be a part of something that is very honest, and Lee Daniels, baby, he's going to give it to you. He's going to give it to you raw. No chaser, no lollipop licking, this is it. It's the dirt, it's the grime, it's what we're afraid of.....I don't know of any other director that would have given two fat, black women the opportunity to do what we did... The world needs to see it because guess what, Mary Jones exists, baby. So does Precious.

Why I bolded that line above: Despite any and all claims of racism or black-on-black betrayal, Precious represents something all decent people must celebrate: A serious movie filled with almost nothing but great parts for African-American women (that also happens to be directed by a gay guy).

Comments 56
Tags: Film/TV Blogs
The Stranger depends on your continuing support to provide articles like this one. In return, we pledge our ongoing commitment to truthful, progressive journalism and serving our community. So if you’re able, please consider a small recurring contribution. Thank you—you are appreciated!
CONTRIBUTE NOW