Yesterday the Stranger Suggested: Everything Is Terrible! 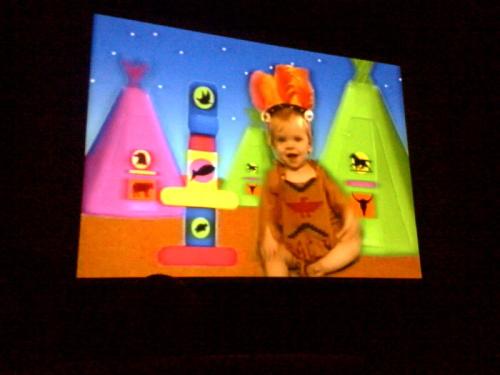 My name is Nadia, and I would like to take a moment to thank my Suggests predecessors and the folks at the Stranger for letting me take on this job. I decided I wanted to write Suggests because it's 2010, and I haven't made any frenemies yet. So let's get to it...

My date and I arrive at Central Cinema early, before the Terrible! festivities begin. We wait for the booze, while on the big screen, Sonny Bono weaves a cautionary tale against youthful marijuana use whilst adorned in a glistening pair of golden, satin pajamas.

Lucky for us, the main event is a creepy video pastiche entitled Everything Is Terrible!, and Everything Is Terrible! = The promise of Dolph Lundgren's icy stare and Angela Lansbury's crotch colliding in a primordial stew of post-'90s video. And it is a roiling vat of video, one that sounds like my eardrums somehow took a wrong turn into your mom's liposuction surgery.

Fortunately, for the Central Cinema viewer, sound is adjusted to slightly less than ear-deafening levels, after the announcer probably realizes his eardrums hurt too; unfortunately, as the audio/visual issue is resolved, timing falls flat on a montage of children's programming gone horribly awry.

In terms of video quality, not even the greasy handlings of a late night infomercial camcorder can diminish the rippling physiques of a group of bodybuilders swapping muscle secrets, and when one is asked, "How'd you get those calves?" the video cuts to "homoerotic" behavior, i.e., a man riding another man's backside in search of the buffest calves ever; each man wrapped in the spandex of his desires.

Recommendation approved if you are under the age of 40, and/or really, really like having your senses assaulted. Plus, Central Cinema has beer and food. Go there.

Comments 6
Tags: Film/TV Blogs
The Stranger depends on your continuing support to provide articles like this one. In return, we pledge our ongoing commitment to truthful, progressive journalism and serving our community. So if you’re able, please consider a small recurring contribution. Thank you—you are appreciated!
CONTRIBUTE NOW