Chi-Raq Is an Insult to Do the Right Thing, to Black Women, and to Malcolm X 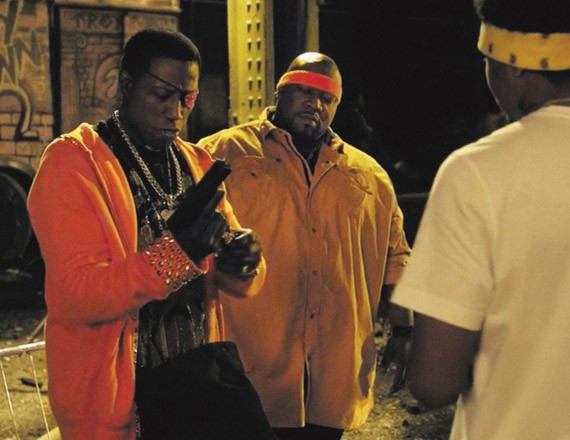 What happened to you, Spike? DAMN!

Movie reviewers are pretty solitary people. We silently file into dark theaters with our notepads and watch a screening, we nod at the studio rep on our way out, perhaps giving a vague quote like "Interesting" or "Nice soundtrack" when asked for a first impression. Then we go home, write our 700 words, and collect our commission. It's a good job for people who like to watch others interact, without ever having to do so in real life.

As I walked out of Chi-Raq and was asked for my first impression, I started with my usual response, "It was... interesting." But then I stopped and added, "And it was bad." Then I nodded my head a little more confidently, "Yes, it was very bad."

"Oh, thank God," said a voice behind me, "I was worried I was the only one." Another reviewer walked up. "I almost walked out halfway through," he added. "How does a movie like this even get made?" another reviewer asked.

Here we were, the most antisocial people in the writing world, reaching out to share the pain we had just experienced. The pain of Chi-Raq, Spike Lee's ambitious new film tackling inner-city Chicago violence through the power of the pussy (I wish I were exaggerating, but it's based on the ancient Greek play Lysistrata). A fucking horrible film. This film is so bad, that even after 20 minutes of commiserating with other reviewers, even after bitching about it on my date later in the evening for another 20 minutes, I still don't know how to pour all my hate for this film into one review.

So I'll start here: Chi-Raq is bad. Everything about it is bad. Don't see it. For those of you who need more than that before being convinced to not waste $12 and two hours of your life on this monstrosity, let me try to put into words what makes this film so awful, listed from least egregious to "Jesus, Spike Lee, what happened to you?"

1. John Cusack's character, a white preacher dedicated to Chicago's black community, seems like he might be a joke at first—the white dude who just "doesn't get it." But it turns out he's the only character in the film who does get it. He's the moral compass of the film and in fact makes so much sense that his character seems out of place in a film where every other character appears to be a farce. Why is the only white character in the film the only one worth watching? Spike Lee, you make no sense.

3. Everyone speaks in rhyme. It's a Shakespearian twist that works more to highlight the banality of the dialogue than anything else.

4. The music is painfully bad. Nothing shows how out of touch Spike Lee is these days more than the shitty, overwrought music in this film. Spike used to put together a badass soundtrack, but the music in this film is nothing more a 50-year-old's guess at what the young kids are doing these days with their iPods and their hippity-hop.

5. The film is a gross oversimplification of inner-city violence and its causes. Aside from a spot-on monologue from Cusack, of all people, this film boils down inner-city violence to beef and ego. Gang members hang out under bridges on abandoned furniture, stroking their guns and listening to music on a boom box, like discarded characters from The Wire turned into actual trolls. There isn't an ounce of depth to any of these characters. It feels like what a Fox News anchor imagines gang life is like.

6. Women are reduced to walking vaginas. Did you know that in inner cities, black men are just walking around shooting each other all day, and black women are walking around in hot pants just waiting for the men to put down their guns for five minutes in order to sex them with their flesh guns? Women don't work, they don't have hopes or dreams, they don't do anything but get fucked by dudes. And because that's all they do, their vaginas have been imbued with such power that they can change the world. No, they don't change the world with their intellect or their work, they change the world by refusing access to their golden vaginas. I don't know how to make it clear that I'm not exaggerating—I really, really wish I was. This entire film is women walking around, scantily clad, with literal padlocks over their vaginas because that is their only power and they must lock it up in order to get men to do what they want while men scream that they are being denied their God-given right to bone. Denying a man sex is like denying him water or air—an extreme cruelty that makes men justifiably desperate. In a world where black women are more susceptible to domestic and sexual violence, this is a dangerous and tired trope. Elliot Rodger could have written this film.

7. Women's vaginas bring about world peace, end joblessness in the black community, and increase economic investment in inner cities. In the real world, black women are shit upon daily. They suffer from discrimination, systemic oppression, gendered violence, and economic instability. Black women work to survive in a world that rapes them and their daughters, kills their sons and fathers. They struggle to give birth to healthy babies despite medical bias and rising infant mortality rates. They struggle to feed their kids in food deserts. They care for nieces and nephews and grandchildren when black men are locked away in our prison industrial complex. They are demeaned, brutalized, and neglected. But it turns out all they had to do was refuse to fuck dudes for a few months, and all their problems would be solved. Fuck you, Spike Lee.

Comments 56
Tags: Film/TV
The Stranger depends on your continuing support to provide articles like this one. In return, we pledge our ongoing commitment to truthful, progressive journalism and serving our community. So if you’re able, please consider a small recurring contribution. Thank you—you are appreciated!
CONTRIBUTE NOW