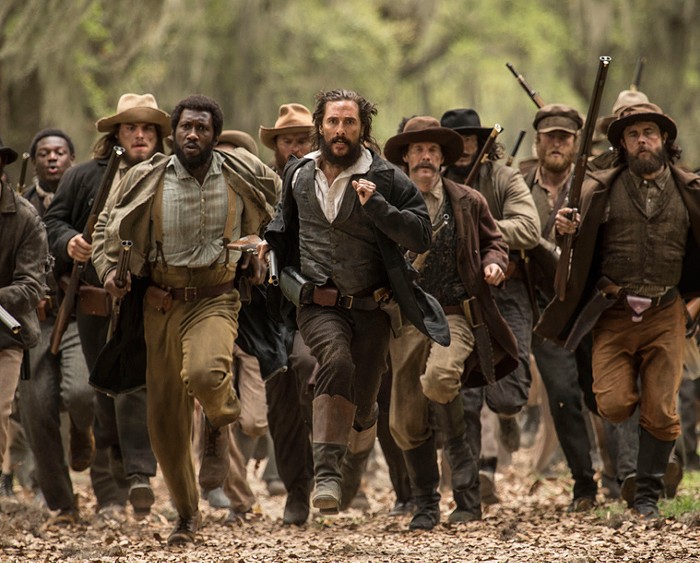 Watch the magical negroes heal Matthew McConaughey from his wounds that he received while badassing his way into exile.
Tweet

You know what else I need? Black pain and suffering. I need another movie focused on the brutalization of black bodies filtered through a Hollywood lens. I need the only faces on the screen that look like mine to be crying, screaming, or slack from the noose.

It used to be that I'd have to separate these much-needed experiences of McConaughey and black pain. Dazed and Confused on Monday, The Help on Tuesday. Ghosts of Girlfriends Past on Wednesday, 12 Years a Slave on Thursday.

Dreams can come true. And they have come true in this 139 minute masterpiece of McConaughey-ness: Free State of Jones.

Watch the magical negroes heal Matthew McConaughey from his wounds that he received while badassing his way into exile. Don't watch them do much else until it's time for them to die.

Watch Matthew McConaughey repeatedly risk the lives of his new props-friends (escaped slaves/magical negroes) so that he can also save them.

What was slavery like for black people? Look at Matthew McConaughey's tortured face as he thinks about how bad it must be and you will know.

Watch Matthew McConaughey beat his chest and tear at his hair in anguish as time and time again his friends and family are killed for his badassery.

Watch Matthew McConaughey slowly fall in love with a slave woman who had previously saved his child with his first wife (whom he still hasn't bothered to ask about), with whom he will eventually enter into a common-law marriage.

Don't watch Matthew McConaughey mention that his to-be wife—the former slave Rachel—was not owned by a random white dude but by his own grandpa (as was the case with the actual Newton Knight, the guy that Matthew McConaughey is pretending to be in this film). They forgot to include that part.

Watch greasy-haired Matthew McConaughey bravely stand up to all the bad white folks who don't approve of him consorting with black folk. Feel good, knowing that if you were alive during the Civil War, you would have been friends with black folk too.

Wake up! Don't fall asleep! I know the Civil War part is over but for some reason this film is still going. You don't want to miss Matthew McConaughey rescuing a black kid from indentured servitude.

Even though the war is over, Matthew McConaughey is not going to wash his hair, otherwise how else would you know that this is a SERIOUS film?

Sleep through the parts of the film that randomly cut to the 1940s when Newton Knight's grandson is on trial for miscegenation. I'm pretty sure that these were meant to be a part of a different white-savior film and somebody in the cutting room got mixed up.

Wake up! Reconstruction is about to start! It's one of the bloodiest times in our history for black people in America, and we have to know what it was like for Matthew McConaughey.

Watch Matthew McConaughey clench his fists in righteous indignation and rage as his black props-friends are terrorized.

Watch Matthew McConaughey weep while clutching the feet of his black prop-friend who was beaten and hanged from a tree. You know it is horrible because there is a mutilated black body for us to stare at and Matthew McConaughey is very upset over it.

Will Samuel L. Jackson Lick the Gorilla’s Balls? And Other Questions Raised by The Legend of Tarzan

Will We Ever Know Why Disney Remade The Jungle Book?

Gods of Egypt: I’m Not Even Mad