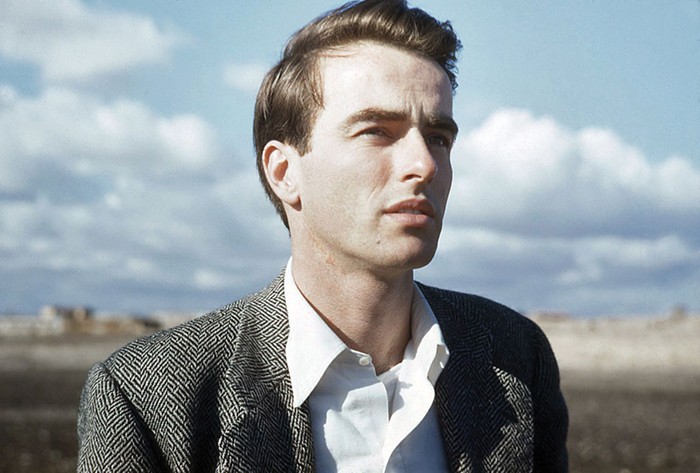 Swoon. Courtesy of Twist Film Festival
The popular narrative around Montgomery Clift is that he was the "slowest suicide in show business." Clift, who died unexpectedly at 45 from a heart attack, was one of the original method actors of Hollywood, often lumped in with James Dean and Marlon Brando. I tend to wince at proclamations of greatness, especially when discussing long-dead male method actors, but by all accounts, Clift was one of America's greatest. He had a way of making text feel like it originated from his body, not a writer far off screen, which was due to him being an incredible Stanislavski-trained actor, and also an actor who made up many of his lines.

Clift was bi, or maybe gay—a fact that should be tangential when considering his work, but in Clift's case, it's at the heart of it. Unlike Dean, who died a tragic death in the traditional sense (a car crash), Clift died a tragic death in the homophobic sense, in that he passed in the '60s while being unashamed of his same-sex attractions. This lack of shame has haunted his biography ever since.

Making Montgomery Clift, a curious and remarkable documentary about his life directed by Clift's own nephew, is attempting to change all of that.

Clift wasn't one to hide a feeling, which made him a great actor and also a terrible straight man. His own mother, in a voice recording played in Making Montgomery Clift, said, "Monty was a homosexual very early. Oh, I think he was about 12 or 13." She didn't seem bothered by that fact. And neither was he. (Although many of Clift's relatives dispute that he was actually bisexual, which, based on the encounters described in the documentary, appears to be true.) He was a pioneer. After years in the theater, he started acting on film at the age of 28, and shockingly managed to create a Hollywood career outside of the studio system. Unlike many (gay) actors of the time, Clift was able to side-step the studio system's morals clauses, which controlled the way Hollywood stars behaved in films and public, and ultimately helped shape the nation's view on sexuality. Forever a rascal, Clift winked his way past the system and—perhaps most remarkably—remained hugely successful.

Check out the gay undertones in this proto-Brokeback Mountain shit:

It does not appear Clift was ever particularly tortured by his feelings towards men, which is demonstrated over and over again in the documentary through a bevy of voice recordings that belong to the Clift family. Unfortunately, his bio got away from him. Biographers, reporters, and directors repeatedly described, and continue to describe, Clift's life through a tragic lens. To them, he was not a courageous, talented actor unbothered by his sexuality. He was tormented and incredibly frustrated. He was a man who led two lives; a story riddled with classic gay tropes.

In 2014, Anne Helen Petersen published Scandals of Classic Hollywood, describing Clift as having a "lonely life, ferocious talent, and tragic decline." Her take on Clift wasn't unique, but endemic to his popular biography and building on previous books about Clift's life, all of which are debunked with surprising clarity in Making Montgomery Clift.

Biopics on Clift have been pitched for decades, the latest casting Matt Bomer. These biopics have also been based on the popular tellings of Clift, which paint him as a tragic, unhappy, closeted homosexual—or, as this Telegraph article proclaims of him: "Better than Brando, more tragic than Dean." The doc includes cringe-worthy interviews with the creators behind one of the failed biopics as they enthusiastically rattle off the tragic premise of their film.

Making Montgomery Clift suffers, at times, from far too much B-roll, but it's offset by the inclusion of an extraordinary amount of voice recordings of Clift and his family members. The documentary manages to be not only a strikingly honest take on Clift but also a moving exploration of a lost relative and a meta-analysis of the ways media creates a biography. It is a testament to how we must do the good, hard work of uncovering the truth behind classical queer figures. We can only hope future attempts at a Montgomery Clift biopic use this film as their blueprint.