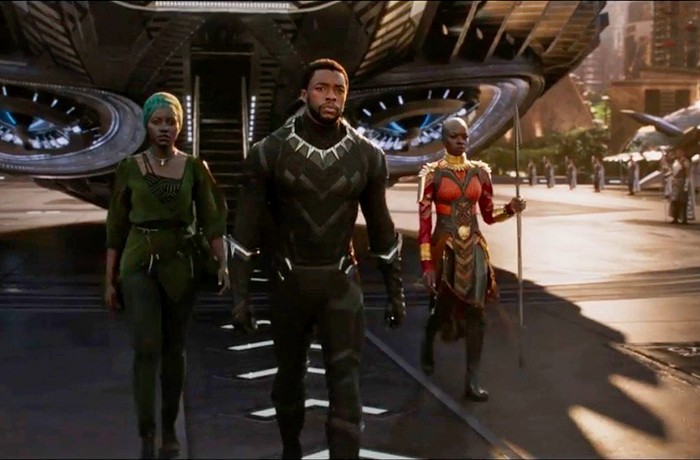 Disney
The famous white American novelist Bret Easton Ellis believes that Black Panther, a superhero movie directed by a black American, Ryan Coogler, doesn't deserve any attention from the Academy. The work is, in his opinion, not very good. He also claims that the people he knows in "La La Land" are of the same mind. Black Panther's artistic value is little to zero. It is not "cinema." It is, like other superhero films, just trash for the masses. So, why was it nominated for seven Oscars, including Best Picture? Because, according to Ellis, Hollywood (and particularly Disney) is trying to shove diversity down the throats of white men.

The entertainment press and the studio is selling the notion that ‘Black Panther’ is a grand piece of cinematic art that cannot be ignored. And this notion is being shoved down our throats and we can only smile in disbelief. Or perhaps understand that this is just the moment we’re trapped in. A joke, a hoax. It’s all fake news, folks.

What's truly shocking about the statement is not so much its obvious racism, but that it reveals where Ellis places himself in the high/low world of art. In his mind, his position is way above that of this superhero movie, which happens to be made by a black person and stars black people and is set in a (fictional) black country. But does Ellis even know his own novels? They are packed with so much trash, have nothing that can be described as literary depth, and are written in a style that cannot be distinguished from pulp.

What the people in "La La Land" and the world in general should really wonder at is: Why is it so easy for third-rate white male writers to become famous, make loads of money, and even be recognized as the judges of what is and is not high-culture?

Furthermore, where does Ellis's authority come from? As far as I can tell (and all of my good friends in the Emerald City agree on this point), he is no Proust, or Nabokov, or Raban, or Sebald (and the last is second-rate). And yet he actually believes he has more to offer the world than Black Panther (whose director, Coogler, is not only not only 32 but has mastered the three realms of filmmaking—the indie one, Fruitvale Station; the mid-level one, Creed; and that of the blockbuster, Black Panther).

Let's leave the fact that Ellis failed to recognize that Coogler actually deserved to be in competition in the Oscars for the first two films (and, considering the culture of the Academy, particularly the second), and be dumbfounded that an author who is destined to be forgotten, because almost nothing about our cultural world would change if his books did not exist, thinks more edification is to be obtained by spending time in his tales of Manhattan's white elite rather than in scenes set in Wakanda. It is also just stunning that he thinks the world really needs yet another third-rate white writer who goes on and on about what is already in countless books and films by third-rate white male writers and filmmakers.

Lastly, Ellis has no fucking idea that the throats of black folk have white cultural trash stuffed down them almost all of the time. Day after day, white story after white story, no matter how bad or good. But when this happens to his pristine throat once, he has to swallow something black (and which is actually not bad), he has already had enough. It's just too "nauseating" for him, these still rare works and moments of "inclusivity and diversity." We must stick with the usual white trash. If all of this was not amazing enough, we can also add that white males who hate diversity and that sort of thing are under the impression that they, like Ellis, have first-rate creative and mental abilities. They really believe being the best is the default for their kind. This illusion has done so much harm in the world. You only have to look at the president.