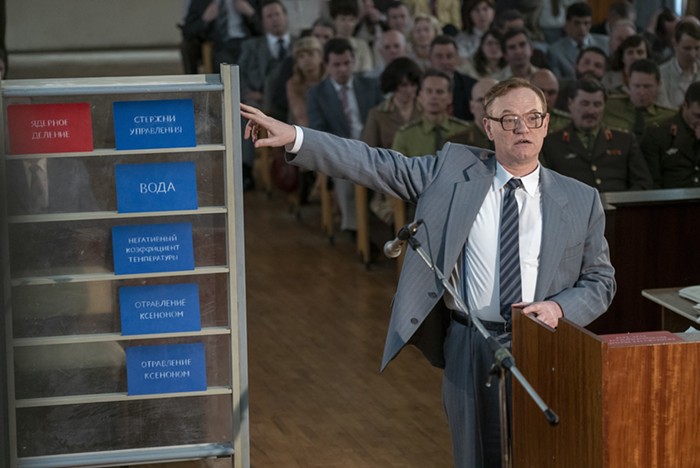 Valery Legasov (Jared Harris) breaking nuclear reactors the fuck down for us dummies at home Liam Daniel/Courtesy of HBO
Last night, we finally saw what came of the Chernobyl disaster on the five part HBO/Sky miniseries of the same name. Of course, we already knew what happened.

What the finale really fleshed out was not only the viewers' understanding of the science behind the engineers' horrible decisions at Chernobyl (I think I could now somewhat competently explain how a nuclear reactor works thankyouverymuch), but the impact of the lies (THE LIES!) that the Soviet state peddled in order to avoid any sort of culpability of the incident. Chernobyl effectively and horrifyingly enunciates how a system (rigid adherence to party, state, etc.) can be blamed for the deaths of thousands of people in Eastern Europe.

And, right now, I am here to speak of death. And music.

Playing over the final moments of the finale was a beautiful liturgical chant bearing the episode's title, "Vichnaya Pamyat," which roughly translates from Ukrainian to "Memory Eternal" in English. This Eastern Orthodox chant—or exclamation—is played at the end of the funeral or memorial service as way of remembering the dead. Elements of it were used throughout the show, but in the epilogue of "Vichnaya Pamyat," the chant comes to the fore.

Sung by the all-male Ukrainian HOMIN Lviv Municipal Choir, this rendition is hauntingly spare and sorrowful—the baritones seem to come from the surface of the earth itself. Coupled with the images and video of the actors' real-life counterparts as we learn about their fates, it's a punch straight to the gut, evoking both profound horror and sorrowful divinity. "Vichnaya Pamyat" is a perfect musical ending to a series that is ultimately a testament to the hundreds of thousands of people who put themselves in danger to contain one of the worst nuclear disasters in history. It got me fucked up.